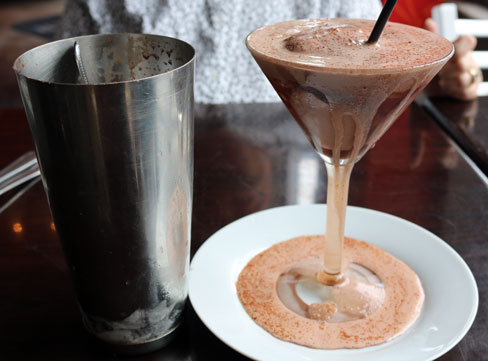 “Q.” It’s the seventeenth letter of the English alphabet, a consonant. Only two letters (“X” and “Z”) occur less frequently as first letters of words found in the English dictionary. It’s the only letter not to appear in any of the names of the fifty states of America. As with its 25 alphabetical colleagues, it’s an onomatopoeia. It’s both the name of an omnipotent entity in Star Trek: The Next Generation and the title given to the nerdy-techy head of the British Secret Service who comes up with all the cool gadgets used by James Bond to thwart rottenness. If a former mayor of Albuquerque had had his way, “The Q” would have also been yet another city sobriquet, joining Duke City and Burque as nicknames on which to hang our hats.

Several years ago, then Albuquerque mayor Martin Chavez attempted a commercially-driven re-branding of the city, an effort which was (to put it mildly) very unpopular with the citizenry. Some surmise that “The Q” reminded people of “queue” as in the seemingly interminable lines at the Motor Vehicle Department and Social Security office. Others opine that “The Q” made the spelling-challenged among us feel patronized for abbreviating the city’s name to “ABQ” just as the Albuquerque International Sunport does. Whatever the reason, the backlash against “The Q” was likely the impetus behind the nickname “Burque” regaining a firm foothold on the hearts and minds of Albuquerque’s populace.

Several Burque businesses either embraced Mayor Marty’s whimsy or they delighted in the concept of fewer letters equaling cheaper billboards and marquees. One of the businesses opting for the re-branding sported the vowel-deprived, consonant-rich name of bRgR. While a great mnemonic for a license plate, the name bRgR seemed to confuse some of the geriatrically advanced among us who haven’t mastered Twitter shorthand. The upscale burger restaurant retained the name bRgR from its launch in July, 2012 through its re-branding in June, 2012—about the length of an average Hollywood marriage.

It wasn’t solely the name which experienced a remake. When it was bRgR, large pictures of sad-eyed cows (obviously cognizant of their fates) festooned the walls, evoking not the pangs of hunger, but feelings of guilt among soft-hearted diners. Where the most corpulent cow once dominated the wall now hangs a picture of two comely, long-limbed women flanking a large letter Q. Perhaps if Mayor Marty had employed similar pulchritude in promoting his vision for “The Q,” at least those of us sporting the XY-chromosome pairing would have embraced it…much as we embrace the flat screen televisions suspended over the bar and tuned to sports channels. Most men won’t even notice the chandeliers hanging from the vaulted ceiling unless it’s to appreciate the quality of the chains holding them in place.

There’s one more “Q” relevant to this review. It’s called the “Q Score” and it represents how familiar and appealing a product is. The higher the Q score, the more highly thought-of the item is among people familiar with that product. Were it to be polled, perhaps no product in America would receive a higher score than the All-American hamburger. Hence Q Burger should receive a very high Q score for having some of the most appealing burgers in the Duke City…er, The Q. There are fifteen burgers on the menu, including a build-your-own option. To the ire of spellcheckers everywhere, the letter Q is incorporated into the spelling of every burger on the menu. You’ll find, for example, a “steaQhouse burger,” a “saganaQi kobe burger,” a “burQueño burger” and a dozen more.

As you peruse the menu, you might want to indulge in dare-to-be-different milkshakes. Anyone and everyone can make a strawberry or vanilla shake and both are available on Q Burger’s menu, but why not try something else? Why not try the dark chocolate red chile-dusted milkshake, more evidence that in New Mexico chile can be incorporated into everything. To be honest, there’s not enough chile to suit this volcano-eater, but it might traumatize most Texans.

Q Burger takes great pride in using New Mexico raised, grass-fed beef (not available on the occasional kangaroo burger special) seared medium. There’s no charge for substituting chicken, turkey or blaq bean. Brioche buns are baked daily at the House of Bread bakery on Carlisle. Whole wheat and gluten-free buns are also available. Local pride is also evidenced in the use of seasonal area produce and fire-roasted green chile from Hatch. All burgers are served with one side, among available options being sweet potato tots, green bean fries, calamari fries, fried pickles, bacon cheese fries and more. Yeah, who needs plain, boring fries when you can have wasabi coleslaw with ginger garnish.

Ostensibly, steak burgers should evoke memories reminiscent of large, flavorful burgers constructed with the type of meat used in traditional steakhouses. That generally means meat of a higher quality or leaner variety than the usual ground beef and condiments such as steak seasonings and barbecued meats. Steak burgers are traditionally grilled or broiled over a fire. Q Burger’s SteaQhouse Burger has many of those qualities, especially the high quality beef, but what really elevates it is the umami (a strong meaty taste with a long lasting, mouthwatering and coating sensation over the tongue) it gleans from the sauteed mushroom demi-glace.

Turophiles who prefer their fromage on the fetid side and believe bacon is on top of the food pyramid will love the BlaQ-N-Bleu Kobe Burger, a bleu cheese and bacon-stuffed behemoth served with a burnt butter sauce on the side. It’s one of the very best bleu cheese burgers in Albuquerque…and believe me, I’ve searched high and low. To add mustard, ketchup or mayo would be to desecrate this meaty, cheesy, bacony beauty. It’s a burger meant to be enjoyed exactly as it’s delivered to your table. My only nit about this burger (and the SteaQhouse burger, too) is that “medium” translates to “medium-well,” robbing an otherwise near perfect burger of the juiciness a lesser charred burger would bestow.

While Albuquerque may have found it whimsical and outlandish that the city needed another nickname, savvy Duke City diners believe “The Q” as a burger is an excellent idea.