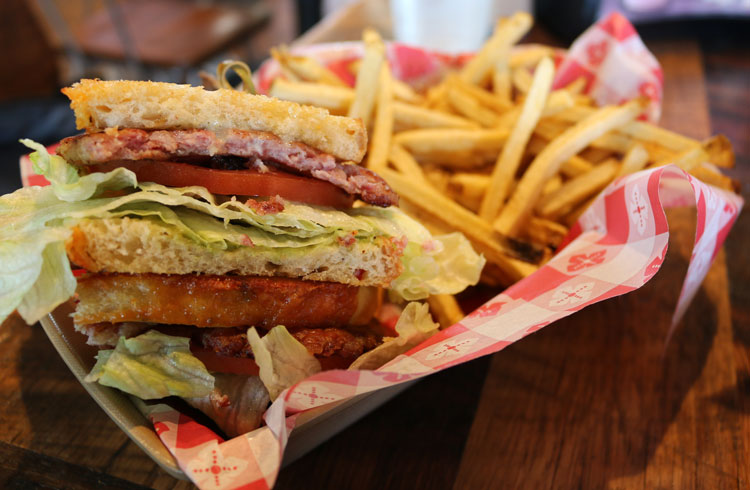 “The best stories are like the best burgers: big, juicy, and messy.”
~A.D. Posey, American Author

For men of my generation, a Big Mac was a rite of passage, a graduation from Happy Meal cheeseburgers to a real adult burger…an event akin to transitioning from training wheels to a ten speed bike.  We had grown up singing the jingle “two all beef patties, special sauce, lettuce, cheese, pickles, onions on a sesame seed bun” and finally got to experience one for ourselves.   I had assumed all parents would, when their sons had proven worthy, introduce them to the Big Mac.  You can imagine my surprise upon reading a 2016 Wall Street Journal report that only one in five adults between the ages of 18 and 34 has ever even tasted McDonald’s signature burger. That’s right!   Eighty percent of all millennials have never experienced a Big Mac!  Even more surprising, many of my generation–those of us who grew up on Big Macs– haven’t had one in decades (and I had thought it was only me).

Millennials not only make better, more healthy food choices than youth of my generation, they’ve had the advantage of more and better alternatives.  Obviously they’re much smarter, too as statistics show they’re much more apt to support local, non-chain restaurants.  Those of us who grew up a captive market to Mickey D’s and other fast food purveyors of that ilk have, over time, evolved to emulate millennials in making our own better choices.  We’ve turned our backs on Big Macs and more than ever before, heartily embrace mom-and-pop dining establishments, the locally owned and operated gems.  Whether independent or chain, in the burger arena, one of our favorites is Laguna Burger.

What’s surprising about that declaration is that until November 2017, the  closest Laguna Burger to Albuquerque was about twenty miles from the Big I, too far for beyond the constraints of an extended lunch hour for most of us even if we drive fast. Never mind that it has an Albuquerque address (14311 Central Avenue, N.W.), it’s out in the boonies, just west of the Rio Puerco.  Still savvy diners made the trek westward along Route 66 where we joined throngs of travelers who found Laguna Burger a veritable oasis in the desert.  Among readers of Gil’s Thrilling…, Laguna Burger has been especially popular.

In 2016 and 2017 my review of the Laguna Burger at the Pit Stop by the Rio Puerco was the most frequently visited post on the blog. In 2015 and 2014, only one restaurant (Down N’ Dirty Seafood Boil) received more blog visits than Laguna Burger. If only a small number of you who read the review actually also visited Laguna Burger, that’s thousands of visitors. It’s safe to assume tens of thousands of visitors who haven’t read Gil’s Thrilling review have also made their way to one of the four Laguna Burger locations, three of which are off-the-beaten path unless you’re traveling on Route 66.

In November, 2017, Laguna Burger finally established a presence in Albuquerque and it did so on a grand scale. It’s housed in a 3,000 square-foot space on Avanyu Plaza near the Indian Pueblo Cultural Center on 12th Street (where it lies just west of the largest free-standing Starbucks in the Land of Enchantment). Between the interior dining room and an outdoor patio, the complex seats roughly 150 diners. While many guests frequent Laguna Burger for its eponymous half-pound never-frozen-certified-Angus-beef burgers, others have begun exploring other menu options (and not just “The Wimp,” a third-pound version of its famous elder sibling).

As great as the Laguna burger (the official green chile cheeseburger of the UNM Lobos, by the way) is, you owe it to yourself to peruse the expansive menu at the 12th Street location. It’s definitely got something for everyone, boasting of six burgers as well as six hot dogs, six sandwiches, five salads and five sides. Laguna libations include shakes, floats and teas as well as “lit” shakes and spiked lemonades which contain alcohol. If other items on the menu are prepared with the same attention to detail, consistency and quality for which this heralded burger purveyor is known, you might soon not be able to find a seat at this location.

Sadly, my own inaugural experience was fraught with disappointment, warranting a revisit of my oft-repeated disclaimer that “reviews are a snapshot in time and may differ from your own experiences.” Along with that disclaimer is an optimistic hope that my visit was an anomaly and that in future visits Laguna Burger will reclaim my affections and loyalty. My friend Bill Resnik and I obviously had an unwanted guest, the infamous Murphy of the “anything that can go wrong will go wrong” axiom. What did go wrong manifested itself most on the hot dogs we ordered—a Rio Puerco Dog (queso blanco, grilled jalapeno, grilled onions) and a Chili Cheese Dog (beef red chile, shredded Cheddar, diced onions) for him and a Frito Pie Dog (beef red chile, shredded Cheddar, Fritos, shredded lettuce, diced tomato, crema Mexicana) for me.

That these hot dogs can only be eaten with a fork was of little concern to us. We were happy to see the generous pile-up of ingredients beckoning…challenging us. We also loved the concept of split top rolls, the type of which are more commonly used on lobster rolls. The execution we didn’t love. Instead of being lightly toasted and pillowy soft, the rolls were grilled to a dry, crispy consistency. That grill must have been very hot on that day because our hot dogs (the link sausages) were desiccated and charred, rendering them almost leathery. More could be said, but you get the point.

Murphy must have grilled the PLT, (two bacon patties, lettuce, tomato, guacamole, basil mayo, jalapeno Cheddar bread) too because it was also subjected to the same high heat treatment as the hot dogs. Bill had raved about the PLT, confessing it had replaced the Laguna burger as his favorite item on the menu. Prepared well, how could it not be loved? Its ingredients read like a mesmerizing novel of sheer genius…so enthralling that I can’t wait to try it again despite my experience with the first one.

Having Laguna Burger in town is a godsend for Duke City aficionados of the award-winning green chile cheeseburger.  I’d say “it’s so good it’ll make you forget all about the Big Mac,” but it appears time, tastes and better options are already taking care of that.