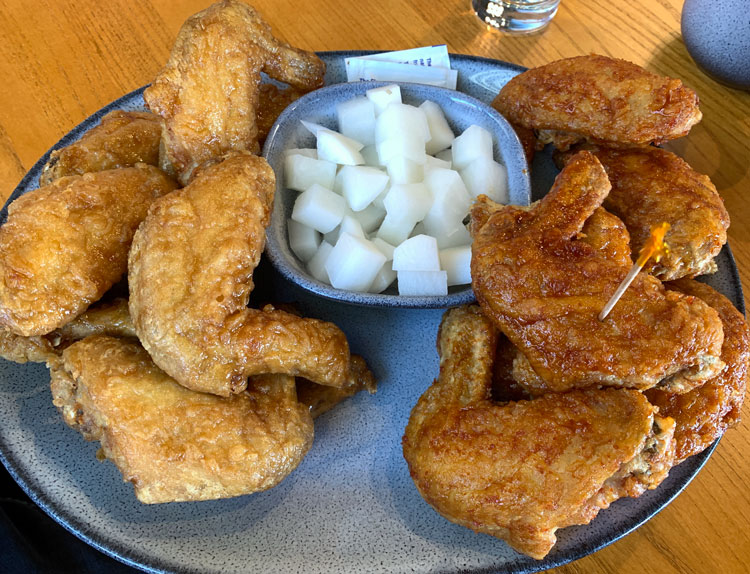 Hawkeye Pierce had a very unique (and very sarcastic) take on the Korean War: “I just don’t know why they’re shooting at us. All we want to do is bring them democracy and white bread. Transplant the American dream. Freedom. Achievement. Hyperacidity. Affluence. Flatulence. Technology. Tension. The inalienable right to an early coronary sitting at your desk while plotting to stab your boss in the back. That’s entertainment.” History has shown there was prophecy in his words. After thousands of years of civilization, South Korea now has donuts, quesadillas, pizza, cheeseburgers, fried chicken nuggets and all the fast foods which have wreaked havoc on America’s gut microbiome.  Hawkeye might term this cynically as the realization of the American dream.

To say there’s a “trade imbalance” between the number of American restaurants in Korea and the number of Korean restaurants in America is an understatement. Many of the ubiquitous fast food chains found throughout the fruited plain can also be found across the Land of the Morning Calm. Very few Korean chains of any genre, but specifically fast food, can be found under the spacious skies. Almost all Korean restaurants in the United States are independent mom-and-pop eateries, including a couple which have earned highly-coveted Michelin stars.

One Korean restaurant has been making great strides in changing that balance. Bonchon, a restaurant specializing in Korean fried chicken is poised to give KFC a real run for its money. Launched in South Korea in 2002, Bonchon expanded rapidly and today boasts of 336 restaurants across the globe. In 2017, Bonchon’s revenue grew 35% with another 40 or so new restaurants opening across the fruited plain in 2019. In February, 2019, Bonchon launched its 90th location under spacious skies when it opened on Albuquerque’s far west side.

Located at 2101-2 Vista Oeste, N.W., Bonchon is, in fact, the antithesis of the “centrally located” restaurant we find so convenient. It’s located just east of Unser about a mile north off I-40. That’s going to make it a destination restaurant for many Duke City diners, especially those east of the Big I. There are currently very few restaurants in a two or three mile radius which means Bonchon also has a captive market of sorts. Visitors are comfortably seated in a modernly appointed 4,000 seat venue.

Bonchon is a Korean word which translates to “my hometown.” It should not be confused with “Banchan” which savvy diners will recognize as the collective name for small side dishes served with Korean meals.  Well-traveled diners who’ve experienced Bonchon in other metropolitan areas recognize that this restaurant specializes in Korean fried chicken, what your friendly neighborhood blogger has been calling “the real KFC” for years.  Though other restaurants across the Land of Enchantment (Sixty-Six Acres in Albuquerque and Rowley’s Farmhouse Ales in Santa Fe)  have variations on Korean fried chicken, Bonchon is one of the world’s most accomplished purveyors of this fabulous fowl.

“What’s so special about Korean fried chicken,” you ask.  For one thing, it’s generally fried twice, rendering the crust crispier than American fried chicken and virtually grease-free (though it’s still just as calorically endowed as any Southern fried chicken).  It’s often coated with a sticky, sweet, spicy sauce.  Bonchon offers its KFC in the form of wings, drums, boneless wings and a combination of wings and drums served with your choice of a soy garlic or spicy sauce.  Best of all, you can order 8, 16 or 24 pieces and mix and match your choice of sauce.

As an  indolent eater who doesn’t much like having to perform manual labor in order to eat (extricating sweet meals from the carapace of a lobster, crab claws, shrimp shells or even from boned chicken), my preference for chicken is usually of the boneless variety.  That’s why Bonchon’s eight-piece boneless chicken wings made so much sense.  So did having half of them with the soy garlic and half with the spicy sauce.  Easily thrice the size of chicken McNuggets (which I’ve seen only in pictures), these plump boneless beauties have a delightfully crispy exterior which gives way to tender, juicy white meat on the inside.   The soy garlic sauce isn’t nearly as assertive as its Italian counterpart might be and it isn’t overly salty as some soy.  It has a pleasant personality that takes nothing away from the delicate chicken.  The spicy sauce, on the other hand, definitely packs a punch.  My friend Captain Tuttle can handle it easily without breaking a sweat, but they made me blink a couple of times.  The accompanying pickled radish quells the heat a bit.

It’s not just Korean fried chicken at Bonchon whose menu includes a variety of Korean specialties which are becoming increasingly familiar to the American palate.  That means such favorites as bulgogi, kimchi and bibimbap.  Koreans have mastered the art of “leftovers disguised as a gourmet dish” in the popular dish known as Bibimbap, which translates from Korean to “mixed rice.”  I didn’t quite realize just how much Koreans love white rice until reading national book award finalist Pachinko by Min Jin Lee.  It’s a wonderful read, but I digress.  Bonchon’s version of bibimbap has just too much rice for this wehgukin.  To me, the best part of bibimbap is mixing all ingredients to enjoy a wider variety of tastes.  Alas, the mound of rice seemed to overwhelm everything else.

Bonchon’s Korean fried chicken may just have you forget all about the Colonel, but it’s other items on its expansive menu that’ll have you coming back to experience a Korea wholly unlike that of Hawkeye Pierce’s MASH days.

We haven’t been over to Bonchon yet as our gas tanks just are not large enough but if you had ever been into any place in Seoul advertising itself as a Pizza Palace or a Mexican restaurant you would not be so quick to announce that “South Korea now has donuts, quesadillas, pizza…” but their version of an English Pub makes the real thing seem absolutely gourmet. The fried chicken though is great.

Tried this place a couple of weeks ago. It was amazing!

First off, this area (very near to where I live) suffers from a lack of a chicken restaurant. I’ve been lamenting that fact for 20+ years. The closest is Golden Price on Central sorta near Coors, and the Church’s near there, or maybe 98th and Central, or even KFC on Coors and Central. Not convenient, and not great choices.

So glad this was as good as it was. Tried both the spicy and soy/garlic. I enjoyed each very much. Chicken was crispy and juicy. MMMMM. Edamame was quite well prepared, and the fries were pretty good (though next time I’d like to try the parmesan fries).

All in all, I will definitely be back multiple times.

Thank you, good Captain. Have you been to FireBird Nashville Hot Chicken on Eubank yet? You won’t have any problem with the heat, but I saw several people with tears in their eyes, some coughing and sputtering and others with smoke coming out of their ears. Diminished water pressure across the Northeast Heights was reported because of all the water being chugged by diners who tried the hot chicken at the “really cluckin’ hot” level.

Will have to try
Reply to  Gil Garduno

Gil, I see that you frequently quote “fruited plain” from American the Beautiful.

America today is a net-importer of fruit. Nearly 60 percent of fruit consumed in America is imported.

As an economist, I feel impelled to suggest to you an amendment to Katherine Lee Bates sacrosanct song penned in 1893: How about “Above the fruited container ship.” Catchy, eh? Feel free to use it.

Here’s a little nugget from answers.com that explains the author’s motivation: “Katharine Lee Bates’ inspiration for “America the Beautiful” came from her visit to Pikes Peak in 1893. It describes the view as seen from the top of Pikes Peak. At 14,410 ft, the skies are spacious, the mountains in all directions look purple, and below are the cities of Manitou Springs and Colorado Springs. They lie in a fertile valley full of apple and cherry orchards. As far as one can see towards the east are amber waves of grain.”

I’ll bet you’re wondering whether or not Katherine Lee Bates had one of the world-famous Pikes Peak donuts which are baked with a top secret high-altitude formula that basically makes them edible only at 14,000 feet.

While I like your suggestion, “above the fruited container ship” just doesn’t have the same melodic resonance or lyrical flow as the current rendition does.

You wouldn’t be the first lyricist to throw truth under the bus for a rhyming scheme.