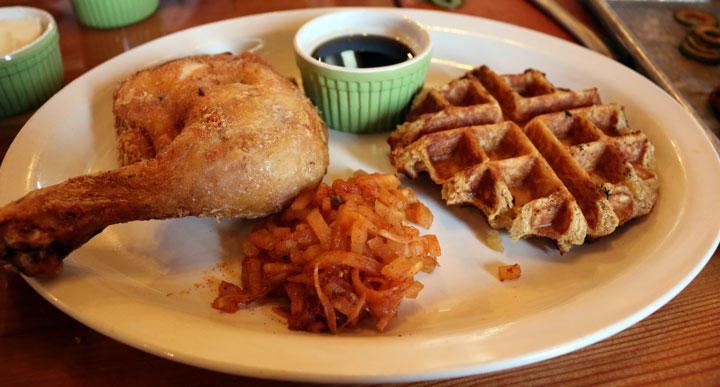 Only in John Denver’s hit song “Thank God I’m A Country Boy” is life on the farm “kinda laid back.” In actuality, farm life can be downright arduous, requiring back-breaking work in climatic extremes for low wages. It was much worse in colonial days when life on a farm generally meant very few luxuries outside of a warm fire and a tankard (or ten) of house-brewed ale. Beer was brewed not only to refresh, sustain and comfort hard-working farmers, but because during sanitation-deprived colonial times, it was safer than water. Farm-brewed beer was created with what was on hand, whether it be wheat, hops, barley or rye supplemented with such ingredients as evergreen boughs, juniper berries, honey and fruit. Because beer was made with whatever ingredients were available, the lack of convention led to an emphasis of individuality over uniformity.

Along with life, liberty and the pursuit of happiness, beer, it seems, was almost an inalienable right and in many cases, an integral part of a worker’s compensation package. Gentlemen farmers such as George Washington brewed beer not only for themselves, but for their farm workers whose employment contracts often stipulated a certain daily allotment of beer. Washington’s farm workers customarily received a bottle of beer a day, each bottle containing one quart of liquid. Washington himself enjoyed beer so much that he named his hound dogs after his, er, affection for ales. Among the names he christened his dogs were “Drunkard,” “Tippler,” and “Tipsy.”

American craft brewers are leading a revival of brewing farmhouse ales in the old world tradition of Belgian, French and American farmhouse ales of the nineteenth century, Though not located in remote farmhouse settings, those brewers strive to capture the rustic essence, seasonality and art of traditional farmhouse brewing. Among the breweries distinguishing themselves by pursuing the farmhouse style is the aptly named Rowley’s Farmhouse Ales in Santa Fe which opened its doors in September, 2016. Located about a block south of Cerrillos on Maclovia Street, Rowley’s not only brews and serves its own farmhouse and sour ales, it offers an extensive draft and bottle list of best available beers from the Land of Enchantment and beyond.

It stands to reason that Rowley’s would pair its farmhouse ales with a farm-to-table menu, essentially upgraded traditional pub fare sourced locally wherever possible. The menu emphasizes ingredients with seasonal availability and includes gluten-free and vegetarian items. Chef Jeffrey Kaplan, who cut his teeth working for Wolfgang Puck and La Brea Bakery in Los Angeles, created a menu designed to pair well with the beer. If you’re of the mind that nothing goes as well with beer as do nuts, run out and get a copy of the March, 2017 print edition of New Mexico Magazine where you’ll find Rowley’s spicy nut bowl recipe.

That edition of New Mexico Magazine included the Readers’ Choice Dining Awards for 2017 where readers weighed in on their “favorite burger and chile joints, taquerias, doughnut shops, and four-star restaurants, plus the most exciting new places and beloved old standbys.” Rowley’s Farmhouse topped the list of favorite new restaurants in Santa Fe. The magazine waxed poetic about Rowley’s: “This southside gastropub captivated Santa Feans with its focus on complex, fruity, Belgian-style ales and an ambitious menu of elevated bar food.”

Rowley’s can seat as many as 25 diners and (or) imbibers in its pub area and another 50 in an shaded outdoors area. The pub’s cynosure is a 24-foot-long bar constructed from planks taken from rail-car transport containers and brushed smooth with a high-gloss veneer. Behind the bar are some 24 tap handles showcasing the pub’s diverse selection of beer styles. Habitues can also purchase Rowley’s merchandise–polo shirts and sweatshirts–also on display behind the bar. The pub’s handful of tables also sport a high-gloss veneer. Seating, more functional than comfortable, is on bright red metal chairs.

My Kim jokes that I wouldn’t eat KFC chicken if you put a gun to my head. That’s not entirely accurate. I’d drive a hundred miles out of my way for the real KFC. That would be Korean Fried Chicken and it’s harder to find in New Mexico than Waldo. Rowley’s chicken wings are described as “Korean style” which is characterized by lightly coated chicken pieces fried until the outside is crispy and the meat inside is cooked through. When prepared correctly, the frying actually cooks off the fat from the chicken skin. Rowley’s wings are prepared correctly and are impregnated with a sweet, slightly piquant sauce, not the incendiary sauce which seems to define chicken wings. The six wings are sprinkled with crushed peanuts and green onions and served with a fresh and delicious, whisper-thin cucumber salad.

Turophiles will bow in appreciation at Rowley’s cheese plate, three artisinal cheeses hand-selected by Cheesemongers of Santa Fe. As with all good cheese boards, the three cheeses run the taste gamut—from mild to sharp with degrees of variation in between. Cheeses should be eaten from mildest to strongest so you don’t miss the nuance of a mild cheese after eating a stinging, astringent blue. The most mild of our three was a wedge of Moses Sleeper, a soft, rich and creamy cheese inspired by a classic French Brie. Of medium sharpness and firmness was an Alpine Blossom with its slightly sweet flavor. Last to be sampled but certainly not last in our hearts was a pungent blue cheese from Point Reyes. The cheese plate also included a a coarse salami with a salty finish, plump and sweet Marcona almonds from Spain and bread slices you can use to construct a sandwich or as a palate-cleanser.
a

Rowley’s offers two waffle options, the most seemingly de rigueur of which is a chicken and waffles plate showcasing Liege Belgian waffles served with your choice of a leg and thigh or breast, house-made Colkegan barrel-aged maple syrup and apple coleslaw. Leige waffles are several orders of magnitude better than any waffles you may have had at IHOP. They’re made with a yeast raised dough, not a batter and are more full-flavored and sweet than other waffle types. The Colkegan (a single malt whiskey) barrel-aged maple syrup is similarly much better than any store-bought syrup you can buy. The fried chicken is lightly battered and moist while the sweet-tangy apple coleslaw proves a worthy foil for every item on the plate.

When prepared well, risotto has a rich, creamy and slightly chewy texture, with each individual grain of arborio rice standing out clearly and having a hint of a bite, rather than being soft or mushy. Perhaps because preparing risotto can be a complicated process requiring painstaking monitoring, not many restaurants across the Land of Enchantment offer it and those which do tend to prepare it with rich proteins such as lobster. Rowley’s Farmers Market Risotto features a selection of fresh vegetables. It’s an excellent risotto made both gluten free and vegetarian. We were surprised at how well each of the vegetables (tomatoes, mushrooms, corn and arugula) worked with the rich, creamy risotto. The sweet corn, especially, seemed to pop in contrast to the otherwise savory dish.

It’s easy to see why Rowley’s Farmhouse Ales was listed as one of Santa Fe’s favorite new restaurants according to New Mexico Magazine’s readers. With an inventive menu of farm-to-table favorites, it promises to be a Santa Fe favorite for a long, long time.