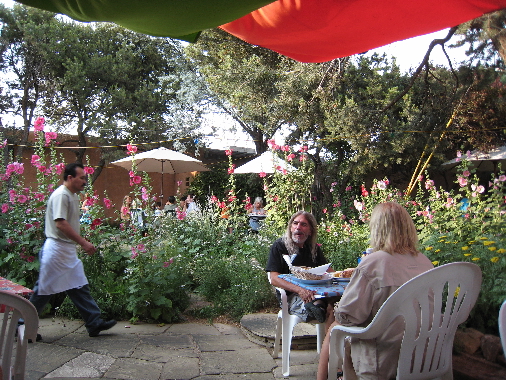 Roadhouses–great inns and restaurants located near major highways traversing the country–once dotted America’s fruited plain, offering respite and sustenance to weary or hungry travelers. Renown for serving great comfort foods, they have been an important part of America’s heritage though with the advent of fast food restaurants and chains, fewer authentic roadhouses exist today.  Harry’s Roadhouse may be a bit more sophisticated and eclectic than its roadhouse brethren, offering several kinds of pizza, sandwiches, burgers, salads, pastas, Cajun and Asian cuisine as well as American comfort food standards that give it a feel and taste of home.

To say it’s a popular dining destination is an understatement. If you don’t get there early, you may have to wait to be seated despite the restaurant’s sprawling multi-room capacity. Even during peak hours, the efficient wait staff will likely have you seated within half an hour.  The lavender trimmed restaurant has several dining rooms, each with a different decor. There’s a room with an atrium-like ambience and windows to maximize light and one with an artsy Southwestern room replete with mismatched tables.

Ask for seating where you can have a view of the restaurant’s center, a kitchen abuzz with activity. That puts you also in close proximity to the counter in which Harry’s famous pies and desserts will elicit gustatory lust in the most staunch dieter.  During the summer, even better seating is available out-of-doors in Harry’s garden. Colorful hollyhocks are the home of busy bees, but they’ll leave you alone if you reciprocate that courtesy. Clinging to the coyote fencing buttressing much of the property are verdant grape vines and their clustered green fruit.

Summer may be the best time of year for dining at Harry’s. One of the reasons is the availability of watermelon juice on the menu. It’s as fleshy as if just extricated from its rindy home and not necessarily thirst quenching, but absolutely delicious, comparable to its Mexican brethren agua fresca de sandia.  Reputedly Harry’s is also home to great lime-infused margaritas and other adult libations. A rustic bar features spirits of all sorts. Alternatively, teetotalers will enjoy some of the very best lemonade you can find anywhere.

At dinner almost immediately after ordering, you’ll be treated to a basket of warm, crusty sourdough bread baked by the Sage Bakehouse, a state treasure. This bread truly deserves the sobriquet “staff of life” as each and every loaf is baked to golden perfection using a natural leavening process free of commercial yeast.

The menu changes frequently and is sure to have something everyone in the family will enjoy. From appetizers to entrees, Harry’s Roadhouse delivers on its motto of “A Square Meal Every Time.” You’ll see this motto emblazoned on the shirts worn by the wait staff and you’ll see it executed in every meal.

Note: In 2007, Gibbs Smith published Harry’s Roadhouse Cookbook in which Harry Shapiro includes the recipes for many of the most popular dishes served in his restaurant. It’s a must have for Roadhouse fans.  Shapiro is originally from Philadelphia, Pennsylvania but he moved to New Mexico after falling under the enchanting spell of our cuisine.  He and his wife Peyton Young have been serving Santa Fe’s Southwestern cuisine favorites for more than a decade.

A popular appetizer when on the menu are the Vietnamese Lobster Spring Rolls (pictured above) served with a sweet and spicy dipping sauce not at all dissimilar to Nuoc Mam, the incomparable Vietnamese fish sauce. The translucent wrapper envelops thin egg noodles, a few sprigs of mint and sweet, succulent lobster. The dipping sauce is terrific.

In fact, that dipping sauce is even better on an entree of Thai Style Grilled Beef Salad than the spicy Thai dressing which accompanies it. The salad features grilled (just above a sear) skirt steak on chopped Romaine lettuce with snap peas, tomatoes, corn wheels, cucumbers and scallions.  The skirt steak is pink-fleshed and slightly chewy, but it is very well seasoned and works well with all the fresh components in this creative salad. Only the spicy Thai dressing fails to live up to its dressing, being more salty than spicy.

From Asian cuisine to the cuisine of Europe, Harry’s Roadhouse seemingly does it all and very well at that. The Baked Penne with four cheeses and a touch of marinara is sure to appease any fromage fanatic…and if four cheeses isn’t enough, you can order this entree with gorgonzola for an appetite quelling, artery clogging bowl of deliciousness. Better still, order it with Harry’s spicy Italian sausage to cut the creaminess and richness of the cheese.  Staying in Italy, simple thin-crust cheese pizza cut into six pieces is substantial enough for two and is better than the pizza served at many pizzerias in town.

If it’s on the dinner menu, the leg of lamb served with a brown gravy infused with fresh ground mint is a good choice. Unlike the overly sweet mint sauce often served with lamb, it’s got that natural, herbal scent and taste of freshness. The accompanying roasted potatoes are optimized by a hint of rosemary and pepper.

The lunch menu is laden with sandwiches, salads and pizzas. The green chile cheeseburger is a “must have.” Grilled to your specifications, it features a thick, hand-formed patty; chopped, gorgeous green chile and other ingredients of your choosing.  Perhaps only the legendary and much missed Bobcat Bite served a better green chile cheeseburger in the Santa Fe area though for some reason, Harry’s burger has not yet made the New Mexico Green Chile Cheeseburger Trail.  Ask for the hot and sweet mustard which has both the gunpowder bite of Chinese hot mustard and the sweetness of honey mustard.  Together with the green chile, it makes the burger (and your taste buds) sing.

That mustard comes standard with Harry’s nonpareil grilled cheese sandwich on sourdough bread which includes aged extra sharp Cheddar cheese and grilled onions. It’s a two-fisted, must-have sandwich. It’s an adult grilled cheese sandwich several orders of magnitude better than any other in town. Ditto on the “must have” for Harry’s New Orleans worthy catfish po-boy with jalapeno tartar sauce, a good cure when we’re missing the Crescent City’s cuisine. Burgers and sandwiches alike are accompanied by hand-cut French fries which are best dipped in that hot and sweet mustard.

Even though Harry’s hefty lunch and dinner portions may leave you waddling, you’ve got to sample Harry’s desserts–Sizeable slabs of sweet deliciousness in every bite and meant to be shared.  The homemade ice cream sandwich features a chocolate cookie crust that puts Oreos to shame while the ice cream (over an inch high) has a premium dairy taste you’ll love.  Premium also describes the luscious pumpkin cheesecake with a praline crust.  It tastes like pumpkin from the vine, not pumpkin from the can.  It is rich, moist and delicious.

Even better is the banana cream pie which might be better than anything Maryann ever prepared at Gilligan’s Island. The flavor of the banana does all the talking here, not some cloying sugar additive. It’s one of the best desserts in Santa Fe.  If you like strong chocolate, the El Rey bittersweet flourless chocolate cake with whipped cream has your name on it. Scrape off the whipped cream and it’s even better.

In 2005, Harry’s Roadhouse was named Santa Fe’s Restaurant of the Year by the Santa Fe Reporter. It’s a very well-deserved honor for one of the City Different’s unique treasures.  In 2008, Harry’s was featured on an episode of the Food Network’s Diners, Drive-Ins and Dives.  Titled “What’s For Breakfast,” the episode showcased some of Harry’s breakfast fare.  There are many Santa Feans who have a “square meal every time” for every meal of the day starting with breakfast.  Now that’s a great way to start the day off.

Breakfast specials are scrawled on a slate board near the front entrance.  You might think it audacious for “hash” to be considered a special.  Hash, after all, is typically a dish made with left-overs of pre-cooked chopped meats and vegetables.  Harry’s elevates hash to a new level and if it’s on that special’s board, make sure you order it. It’s Cajun style duck hash made with smoked duck, Andouille sausage, green and red peppers, onion, celery, okra, sweet potatoes and corn, a veritable cornucopia of deliciousness. This entree is offered with two eggs any style. Just make sure not to ask for eggs over well because you want runny yellow goodness mixing with the melange of ingredients. There’s a lot going on with this hash entree–from the smoky, spicy aggression of the Andouille sausage to the sweet potato goodness.

Of course no breakfast would be complete without Sage Bakehouse toast.  Though it’s been said that man cannot live by bread alone, I could live happily for a long time on only Sage Bakehouse sourdough bread toasted, buttered and slathered with strawberry jelly.  If it doesn’t come standard with your order, ask for a couple slices on the side.  It’s the best toast in town.

One of the daily offerings which includes toast also features two eggs (any style), home fries and your choice of homemade turkey sausage, ham or scrapple.  Srapple is fairly common in Pennsylvania where Harry Shapiro is from, but rarely seen in these parts.  It originated as a way to avoid throwing away scraps of pork left over from butchering.  During the Diners, Drive-Ins and Dives episode at Harry’s, host Guy Fieri told Harry no one in Philadelphia could tell him exactly what part of the pig it came from.  Harry’s retort, “everything but the oinks” isn’t far from the truth in some restaurants.

Harry’s one-ups traditional Pennsylvania Dutch scrapple.  He makes it out of pork butt, pork stock and vegetables all ground and formed into loaves.  Slices of the scrapple are then fried in clarified butter.  Fieri overcame his initial hesitation (admitting he didn’t want to like it) to proclaim Harry’s scrapple “seriously great.” I’ll echo that sentiment.

Harry even adds surprising twists to popular breakfast favorites–like chocolate French toast and blue corn waffles with strips of bacon inside the waffle itself.  Better still, you can have these with Shaker Mountain Farm 100 percent pure Grade A maple syrup.  According to Saveur magazine, an estimated 90 percent of Americans have never tasted real maple syrup.  Most breakfast syrup consumed in America, Saveur claims, is “of the high-fructose corn variety dressed up with caramel color to make it look like the real stuff.”

Harry’s rendition of migas puts a unique Santa Fe spin on a breakfast offering more frequently found in Texas than in the Land of Enchantment.  Traditionally a Lenten dish, migas are a scrambled eggs dish typically served with refried beans, but Harry’s changes things up a bit with black beans.  Other ingredients include onion, green pepper, tomato, pickled jalapeño, tortilla chips and cheese with a side of salsa.  Viva la differencia!  These are excellent migas.

Leave it to Harry’s Roadhouse to redefine comfort food and reinvent fun at mealtime. In a city replete with high-end dining establishments, Harry’s is the people’s choice.