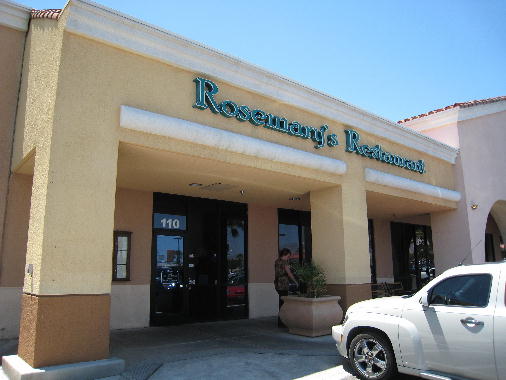 You might think that a chef and proprietor whose restaurant has garnered almost every conceivable accolade might be almost unapproachable, perhaps even haughty and aloof…that being among the gastronomic glitterati, he wouldn’t make time for admirers of his culinary craft.

We learned during a June, 2006 visit that THE Michael Jordan (the other one was a pretty fair basketball player) is one of the nicest, most unassuming and genuinely endearing celebrity chefs we’ve ever met. We had the great fortune of running into Jordan at his restaurant and he wasn’t solely concerned with what we thought of our meal (we loved it, of course). He engaged us in conversation about New Mexico, Chicago, restaurant critics and Chowhound, a Web site he admits to visiting when he wants to take the pulse of his diners.

He was genuinely appreciative of our having driven nearly 600 miles to dine at the fêted restaurant he and wife Wendy launched in 1999 after being fixtures at Emeril Lagasse’s New Orleans Fish House, the MGM Grand Hotel’s trendy restaurant.

With the launch of Rosemary’s (a drawing of a sprig of the popular spice graces the to-go menu) in a fashionable west-side Sahara location, the Jordans were among the first impresarios to open a high-end gourmet restaurant off the strip. The move paid off in short fashion as the restaurant soon began earning the plaudits which are now inconspicuously splayed on the walls leading to the restroom (did I mention Jordan was unassuming).

Occupying wall space are several covers from Vegas Living magazine which for eight consecutive years (2000-2007) accorded this west side restaurant the lofty distinction of “best restaurant off the strip.”

Rosemary’s has also been a perennial selection as “best gourmet restaurant” on the Las Vegas Review-Journal‘s Annual “Best of Las Vegas Awards.” It has been featured in Gourmet magazine, Bon Apetit magazine, Great Chefs magazine and a host of other publications.

It earned a “27” rating in Zagat’s most recent survey of Las Vegas restaurants, making it the city’s second highest ranked dining destination. Aside from Lotus of Siam, there is probably no other Vegas dining establishment which lights up Chowhound’s message boards quite as frequently or with such overwhelming adulation. Those message boards are almost salivatingly effusive in their adoration for a starter called “Hugo’s Texas BBQ Shrimp with Maytag Blue Cheese Coleslaw,” a starter which, by the way, you can find the recipe for on the restaurant’s Web site. Words don’t adequately rhapsodize the mellifluous melodies this unique appetizer dances on your taste buds.

Characteristic of the Jordans, Rosemary’s offers value menus that won’t empty their diners’ wallets. That includes a lunch-time bargain no one in their right minds would pass up–a prix-fixe of just $28 for an appetizer, entree and dessert (a $5 off coupon can be printed off the Web site).

For dinner, the prix-fixe offering is still a bargain at $55 per person. Paying for each item separately would easily add 30 to 40 percent to your bill of fare. Wednesdays is ladies’ night at Rosemary’s as tables of lady diners pay only half the normal cost of their meals. It’s no wonder Rosemary’s has merited such loyalty!

Aside from the aforementioned Hugo’s Texas BBQ Shrimp, the starters include some of the best salads imaginable–salads in which each individual ingredient might elsewhere be solely featured, not just serve as but one of several ingredients harmonizing beautifully on your taste buds.

The arugala and Granny Smith apple salad with dry-aged carpaccio beef, Maytag Blue Cheese, candied walnuts and port wine drizzles is such a salad. You could deconstruct it and enjoy the results immensely, but it’s best left intact so you can marvel at each taste sensation.

The dry aged beef is razor thin, like a sheet of beef tissue, but it explodes with taste. The blue cheese is the ultimate in fetid fromage, a pungent cheese with an acerbic bite that fanatics like me love.

The spinach salad with pecan vinaigrette, sliced smoke duck breast, goat cheese and drizzles of port wine syrup is another lavish salad offering which will earn your unfettered affections. The complementary yet contrasting tastes of sweet, savory and sour compete for the undivided attention of each of your 10,000 taste buds, leaving an indelible impression with each palate-pleasing bite.

You can easily become just as enamored of the main courses.

The grilled wild king salmon on a bed of Granny Smith cabbage slaw with candied walnuts, port wine syrup and toasted wine vinaigrette is quite possibly the very best piece of salmon I’ve ever had. Despite the advertised “wildness” of the salmon, it didn’t have the prominent “fishy” taste you sometimes find in this cold water fish. Instead, the salmon was of perfect texture and a slightly smoky taste complemented beautifully by the sweet and slightly tart cabbage slaw.

Another phenomenal main course offering is the grilled breast of chicken on a bed of “Hoppin John” with caramelized sweet onions and a Creole mustard Beurre Blanc. If you’ve never experienced really good Hoppin John, you’re in for a treat as each spoonful provides a rich experience of textures and tastes. The chicken is perfectly grilled with an almost ethereal skin covering some of the most moist poultry and succulent you’ll ever have.

The seared steak Dianne wrapped in apple smoked bacon with herb roasted potatoes, wild mushrooms and Madiera sauce tastes better than it reads. The steak is unbelievably tender and is complemented beautifully by its component sauce and accompanying ingredients.

If there’s anything that can possibly top the outstanding main courses at Rosemary’s, it’s the decadent desserts. Sweet-toothed diners will experience such heavenly post-prandial perfection as:

Chocolate flourless cake with Scotch caramel sauce and vanilla ice cream, which emphasizes the richness of semi-sweet chocolate without overwhelming the diner with sweetness.

Goat cheese cheesecake with Scotch caramel sauce, simply one of the very best desserts I’ve ever had anywhere. You haven’t really had cheesecake until you’ve had it made with goat cheese, one of nature’s perfect foods.

Lemon ice box pie with raspberry coulis, whipped cream and raspberry sorbet, a dessert in which the prevalent taste sensations are sweet and sour. These contrasting tastes perform a delicious dance on your tongue.

One of the differences between a dining experience at Rosemary’s Restaurant and one at home is that even with a recipe for one of the restaurant’s signature items (Hugo’s Texas BBQ Shrimp), the version you concoct just won’t elicit the swoons of pleasure you may have involuntarily uttered when you first experienced it at Rosemary’s.

Even if you follow each step of the recipe to the letter, you may conclude after one bite you’re just not as gifted as Michael Jordan, so it may just be time for another visit to his wonderful restaurant.