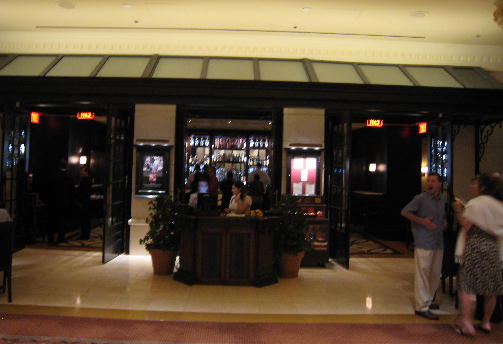 A pair of trademarked orange Crocs on the reception kiosk was as close to Mario Batali as we got. It’s as close as some of the wait staff has gotten in the months since Ristorante B&B launched. We had expected no less. Batali has parlayed his celebrity chef status into a veritable empire of highly acclaimed restaurants in New York City, Los Angeles and Las Vegas.

Like many restaurant impresarios, the “Great One” is intimately involved in the development of the concept and menu for all the restaurants which bear his name. He was also involved in the selection of the kitchen staff who execute to his vision. That’s why visits to some of his outlying restaurants are few and far in between.

Whether you like the celebrity chef concept or not, you’ve got to respect that Molto Mario is always striving to improve upon his craft. Like a culinary anthropologist, he is as interested in the provenance of the cuisine he creates as he is in the actual end product.

A 2005 winner of the James Beard Award for “Outstanding Chef of the Year,” Batali is a legitimate chef force, not just “another pretty face” engaged in kitchen warfare to determine whose cuisine reigns supreme. His knowledge of Italian cuisine is encyclopedic and his menus can’t be compartmentalized into the de rigeur Italian regional categorization of “Northern Italian” or “Southern Italian.” Categorize it as a refreshing departure from the standard. Categorize it as some of the best Italian food imaginable.

Like many Italian restaurants today, Ristorante B&B is a far cry from the days of the thematic template in which an Italian restaurant’s decor was festooned in the red, white and green colors of the Italian flag and the sound systems piped in the music of crooners like Dean Martin and Frank Sinatra. Ristorante B&B (the Bs stand for Batali and Bastianich as in Joe Bastianich, a partner in the restaurant) has a masculine feel to it with dark, rich woods, subdued lighting and the rock music Batali likes so much.

It also has a molto portion of the master’s essence. The concept reflects that: “Featuring a blend of exquisite Italian food and a casual elegance that captures the soul of an Italian grandmother dancing the tango with pop rock hipsters.” This is not Tony Soprano’s Italian restaurant.

Both the dinner menu and the wine list are bound in buttery mahogany leather stamped with the B&B logo. Both are formidable–not voluminous like a dictionary, but rather like a compressed compendium with an intimidating number of items to review. The menu is intimidating because it may quickly bring you to the realization of just how parochial your knowledge of Italian cuisine really is.

How many of us, for example, have seen a menu offering stinging nettles, oak leaves and baby lamb’s tongue? That’s Mario Batali at his best. That’s one of the reasons he’s one of America’s preeminent chefs of any genre.

The wait staff is obviously well trained in the arts of hospitality and service. It is also well versed in all aspects of the menu and more than capable of translating the “chef speak” that, in this case, includes both Italian and English terminology and ingredients.

While you’re contemplating the menu and the specials of the evening, an amuse bouche (tiny, bite-sized morsels typically served before the first course) is presented. Ours was a mix of chickpeas and olive tapenade on crostini. This amuse bouche was just enough to tease our taste buds; if possible, we would have ordered a basket of it.

The antipasti we ordered quickly made the amuse bouche a delicious memory. The first antipasti was a salad constructed of baby red oak leaf with black olive blood orange citronette. At their prime, red oak leaves have an astringent flavor. In their “youth” the leaves are still bitter, but more than edible, especially if “cut” with something sour. The lip-puckering sour taste of the blood orange citronette (a light salad salad dressing with no vinegar) is more than a match for the bitterness of the oak leaves. It renders the oak leaves refreshingly delicious with nary a hint of bitterness and just a subtle, citrus sourness.

Our second antipasti was an order of buffalo mozzarella with charred ramps. The buffalo mozzarella is imported from Naples, Italy and is as creamy and delicious as any mozzarella we’ve ever had–so creamy that portions were barely more than curds, so fresh that you could imagine someone in the kitchen milking the water buffalo.

The mozzarella is drizzled with just a whisper of extra virgin olive oil, cracked black pepper and sea salt. Chive blossoms and charred ramps (a springtime green related to the onion and garlic) are draped across the cheese. They provide a somewhat bitter, but delicious, contrast to the creaminess of the mozzarella. Also served with this antipasti are two well charred crostini which might be best utilized as a palate cleanser in between lavishing the extravagant mozzarella onto your well contented taste buds.

The primi portion of the menu is comprised primarily of pastas. Ristorante B&B serves their pastas in six to seven ounce portions instead of the usual ten ounce portion size because many of their patrons will order a more substantial entree from the secondi menu.

A terrific option from the primi menu is the spaghettini with spicy budding chives, sweet garlic and one pound lobster. All pasta should taste like this. It is served al dente with just a modicum of sauce to complement, not overwhelm, the long strands of delicious pasta. The lobster is extricated from its bony shell and cut into generous bite-sized morsels. It is as sweet as if just plucked out of North Atlantic waters, as tender, juicy and succulent as we’ve had in any land-locked state. This primi was primo!

The secondi menu includes several chops–veal, lamb and pork served bone-in like the chops served in the best Chophouses throughout the country. The grilled pork chop with apricots and Vin Cotto, a term which translates to cooked wine, is perhaps the best pork chop I’ve ever had, including from Chicago.

The pork chop is substantial, easily an inch and a half thick yet the grill master managed to prepare it to my exacting specifications. At medium, the edges are well-crusted with a nice crispy char imbued with the fragrance of wood smoke. Cut into it and there is just a hint of pink with all the juiciness you want from a pork chop.

The Vin Cotto imparts a different essence altogether. It actually does taste like cooked wine, not a wine reduction, but the way fermented grapes might taste if cooked. The semi-sour, semi-sweet apricots also bring out elements of flavor richness to the pork chops we hadn’t previously considered. This is a fabulous pork chop.

Ristorante B&B’s desserts provide that post-prandial extravagance that signifies the perfect end to a perfect meal. Just when you think Mario can’t possibly top himself, a dessert comes along that will blow you away.

One such dessert is the Farmers Berry Crostatu. It starts with a chocolate hazelnut tart crust filled with fresh strawberries, blackberries and blueberries rolled in truffled honey which is then topped with a Belgium beer turned into champagne made into a Zabaliogne custard.

If you like taste and texture variety, this dessert will do it for you. The Zabaliogne is frothy, light and retains just a murmur of the champagne’s effervescence. The berries are in-season, tart and juicy. The chocolate hazelnut tart and the honey provide the dessert’s sweetness. It is a memorable dessert.

When all is said and done, you might just feel like floating down the Venetian’s chlorinated canals while a gondolier serenades you or better still, you might start planning your next visit to what is one of the best Italian restaurants in the Southwest.