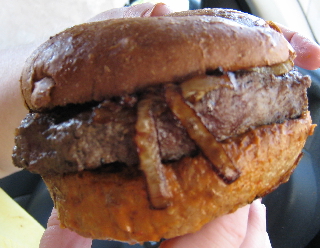 The tee shirts worn by a nattily attired and enthusiastic wait staff at Bert’s Burger Bowl say it all: “Since 1954: One Location Worldwide.” Celebrating its golden anniversary in 2004, Bert’s seems to transcend time with a winning formula: great burgers, terrific service and reasonable prices. Generations of New Mexicans and visitors have made Bert’s a beloved Santa Fe dining destination.  It is such a beloved local institution that then-Representative Tom Udall entered it into the Congressional Record in September, 2004 to commemorate its 50th anniversary.

It’s easy to believe Bert’s popularity is an anomaly. It’s open only until 7PM six days a week and until 5PM on Sundays. There’s nowhere to sit inside the restaurant and if you’re in a hurry, you’re out of luck because every burger is prepared to order. So why do generations of burgerphiles make Bert’s Burger Bowl a popular indulgence? World famous chef Martin Rios of the Anasazi may have said it best in the May, 2007 edition of Santa Fean magazine, “no one beats these burgers.” That’s high praise indeed from a culinary artiste who has been named Chef of the Year by both the city of Santa Fe and the State of New Mexico.

Bert’s claim to fame is the invention of the green chile cheese burger (something I don’t believe has been authenticated and is certainly in dispute because the Owl Bar and Cafe in San Antonio has been serving them up since 1945). It should stand to reason that the inventor of New Mexico’s favorite burger should do it exceedingly well and Bert’s does–so well, in fact, that it was one of 48 restaurants selected for the inaugural New Mexico Green Chile Cheeseburger Trail in 2009. Bert’s was a repeat selection for the New Mexico Green Chile Cheeseburger Trail in 2011.

Each burger is made to order. It takes about 12 minutes per order (and as long as 15 minutes for the lamb burger) which means your burgers don’t sit under a heat lamp. The meat is invariably well seasoned and the condiments are unfailingly fresh with crisp onion, fresh tomato, pickle slices and piquant green chile (Bert’s uses 120 pounds per week). The green chile cheeseburger is the reason Guy Fieri of the Food Network’s Diners, Drive-Ins and Dives visited Bert’s in September, 2008.  The signed poster on display under glass at Bert’s displays Fieri’s sentiments toward that burger: “You gotta love Bert’s green chile cheeseburger.”

Bert’s burger is sometimes maligned by critics because the hamburger patty is anorectic compared to the gigantic slabs of hamburger proffered at restaurants such as the Bobcat Bite. Maybe that’s why altruistic owner Fernando Olea added five upscale gourmet burgers to the restaurant’s menu in the spring of 2007. The meat for each gourmet burger weighs in at a whopping half pound. Each burger is dressed to the nines with atypical ingredients.  In any case, you can always get a double-meat, double-cheese, double-green chile burger as a recourse.

The line-up includes a Kobe burger adorned with the same ingredients as Bert’s standard burger, but hey, we’re talking some of the most decadently oleaginous beef around. It’s the most expensive of the five gourmet burgers. The other four newcomers are a lamb burger (topped with pineapple chunks, chopped cilantro and pastor sauce), a pork burger (crafted with red chile and mashed beans ala San Antonio, Texas style), an ostrich burger (also bedecked with the ingredients found in Bert’s standard burger) and a bison burger.

Bison meat is very high in essential fatty acids that can aid in the reduction of cholesterol levels. It’s a burger served best at no more than medium done so as to preserve its juiciness. Bert’s complements a thick beef patty with grilled onion ribbons and a fiery hot Morita sauce. Morita sauce is made from the smallest jalapeno in the last picking of the crop then is lightly smoked. Alas, a great burger is a sum of all its components, including the bun. During our inaugural experience with the bison burger, the brawny buns were toasted to the point of being desiccated. It detracted from an otherwise interesting and delicious burger.

The lamb burger (pictured below) is so very different from any other burger on the menu in that it’s prepared with an al pastor (shepherd style) sauce.  If you’ve ever had tacos al pastor, you’re familiar with the marinade used on the lamb burger.  A sauce of lime, vinegar, garlic, oregano, onion, salt and guajillo chiles is liquefied on a blender and incorporated into the ground lamb.  The lamb is topped with seared pineapple and cilantro, two other tacos al pastor touches.  It’s not a burger everyone will love (we found it rather dry), but it’s a unique and creative option you might not expect to find in a small mom-and-pop restaurant renowned for conventional green chile cheeseburgers.

Cost conscious Bert’s loyalists might opt instead for the barbecue burger emboldened with a sweet barbecue sauce. A nice alternative to burgers altogether are the carnitas tacos served in soft Mexican corn tortillas with either green or red salsa.

Bert’s chocolate shakes have lots of chocolate flavor and are of the consistency of a thick chocolate milk served very cold. They’re a magical elixir for whatever energy draining heat ails you on a balmy New Mexico summer day.  They’re so good you’ll want to order two of them.

The fries are so-so, but the onion rings are oh so wonderful. We debated just what it was that makes those onion orbs so good and eventually concluded it was the onions themselves. Bert’s onion rings aren’t dominated by that greasy batter you find almost everywhere else. They’re made with real onions whose flavor is allowed to come across wonderfully with a crunchy batter which doesn’t fall away from the onions.

In this age of golden arches and creepy burger monarchs, it’s a treat to dine at a burger stand in which old-fashioned burgers and innovative new burgers can still be had.