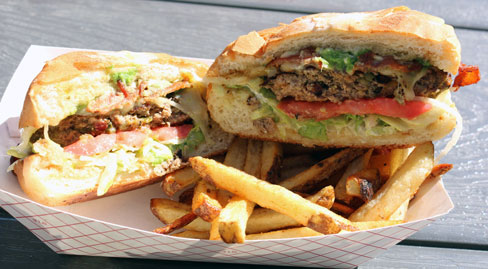 “When people pile seven things onto one burger, it drives me nuts!”
~Bobby Flay

In the Land of Enchantment, it’s almost a foregone conclusion that almost every restaurant, drive-in, diner, dive, joint, cafe, roadside stand, eatery, greasy spoon, lunch counter and bowling alley slinging burgers is going to brag about its green chile cheeseburger being the best to be found anywhere. That is everyone but Santa Fe’s Bang Bite Filling Station which gregarious owner-chef Enrique Guerrero contends doesn’t even offer a green chile cheeseburger. Instead, he defers to the number two, the “Bite Burger,” a mix of jalapeno, poblano, green chile, Serrano and chipotle peppers blended right into the meat.

In a fit of delicious irony that can happen only in New Mexico (or an early episode of MASH), that “not a green chile cheeseburger” earned the distinction of being selected Santa Fe’s very best green chile cheeseburger during the third annual Green Chile Cheeseburger Smackdown in 2015. Aside from five different chiles, the number two that earned number one honors is constructed with bacon, avocado, pepper Jack and jalapeno aioli. Not including the chiles and the cheese, that’s three ingredients. Bobby Flay would be proud.

So is Chef Guerrero, perhaps Santa Fe’s most accomplished vagabond chef, an impresario with very impressive culinary pedigree that includes presiding over the kitchens of some of most highly acclaimed restaurants during their halcyon periods. That includes the now defunct La Mancha at Galisteo Inn when it garnered recognition from Bon Appetit as among “ten of our favorite dining spots in vacation destinations around the country.” Under his watch, La Mancha was also named by Conde Nast Traveler as one of the nation’s 26 “Hot Tables.” More recently, Chef Guerrero was the founding executive chef for the O Eating House in Pojoaque, Mangiamo Pronto in Santa Fe and Ancient Spirits in Bernalillo.

A food truck isn’t a step down for the uber-talented chef. It’s a change in direction and in the fashion of his celebrated culinary career, that direction is up, up and up. In 2014, Bang Bite was selected by readers of Edible for a “Local Hero Award,” an honor which celebrates the region’s best loved food leaders, proving leadership isn’t always exercised in fine-dining kitchens. Santa Fe’s 10Best expert, the fabulous Billie Frank likened Chef Guerrero’s efforts to “right out of Jon Favreau’s hit film Chef,” citing him as “a man with an impressive culinary CV” who “traded his chef’s coat for a tee-shirt.” It’s the proverbial “toque to baseball cap” story and it’s playing out just as Chef Guerrero likes it.

Situated on an otherwise nearly vacant graveled lot off Old Santa Fe Trail (directly across the street from Kaune’s Market), the bright orange Bang Bite might be mistaken for one of the New Mexico Highway Department’s storage bins were it not for the pervasive bouquet emanating from its gleaming stainless interior. That bouquet wafts onto your motorized conveyance like a smoky, appetite-arousing siren beckoning you to stop and uncover its source. That source is an ambitious menu belying the relative Lilliputian size of the food truck. The menu lists ten burgers, eight “sammies,” six “things with cheese” and a number of sides. Specials round out one of the most interesting menus in town (and that’s saying something).

Despite all the possibilities, for aficionados of the fabled green chile cheeseburger, there’s only one choice. That’s the Bite Burger, the number two that’s number one in the hearts of Smackdown judges. At just south of eleven dollars, it’s a rather expensive burger you might expect would be gargantuan in size and flavor. From a flavor standpoint, it hits the mark. It’s a moist, juicy and delicious burger. Alas, and I paraphrase fellow burgerphile Dr. Sheldon Cooper, its meat to bun to condiment ratio wasn’t satisfactory in that the meat did not extend across the circumference of the bun. When you get your hands on a good burger, you don’t want to be shortchanged in any way.

When we lived on the Mississippi Gulf Coast, we enjoyed oyster po’ boys by the boatful. In fact, we may have had nearly as many oyster po’ boys in New Orleans as we’ve had green chile cheeseburgers in Santa Fe. It seemed to make sense we should have an oyster po’ boy in Santa Fe. With a sandwich architect such as Chef Guerrero, you’re ensured of a next best to just-off-the-boat oyster po’ boy. Bang Bite’s version is served on a burger-type bun instead of on a standard po’ boy roll, but other than that it’s as good as many a po’ boy we had–even in New Orleans. In addition to a healthy amount of crispy fried oysters, the sandwich is overfilled with crispy applewood bacon, trailer-made pickles, avocado and a smear of spicy bayou aioli. The oyster po’ boy isn’t on the everyday menu, but it should well be.

Both the Bite Burger and the Oyster Po’ Boy are served with trailer fries, maybe the best fries in Santa Fe. They’re hand-cut and texturally perfect–light and crisp on the outside and soft and tender on the inside. Fries this great deserve better than those annoying packets of ketchup which my ham-sized hands can’t seem to open.

The Bang Bite Filling Station may not have a green chile cheeseburger on its menu, but it’s got just about everything else burger, sandwich and cheese lovers will love. It’s also got the cachet of a legendary, down-to-earth chef plying his inimitable skills of his own volition in a food truck that’s elevating dining in the City Different.