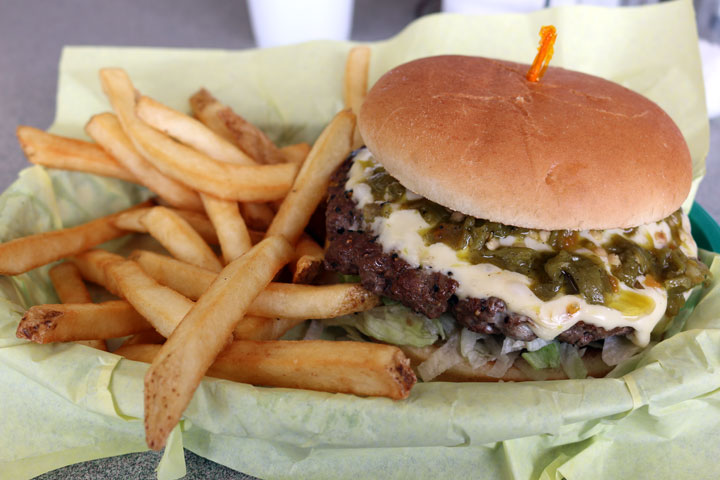 Since its inception in 2009, a number of competitors across the length and breadth of the Land of Enchantment’s 121,593 square miles have competed in the New Mexico State Fair’s Green Chile Cheeseburger Challenge. The inaugural champion was Badlands Burgers (since defunct) from Grants. Only one–a national chain at that–has repeated as champion. That would be Fuddrucker’s which reigned supreme in 2014 and 2015. In 2013, Sadie’s proved its culinary repertoire extends far beyond New Mexican food by winning the Challenge. After participating every year since the competition’s launch, Laguna Burger finally won it all in 2016. Two restaurants won the competition scant months after launching their restaurant operations–ABQ Brew Pub in 2010 and Rockin’ BZ Burgers in 2012.

Rockin’ BZ Burgers, the sole Challenge winner currently not to have a presence in Albuquerque, was in business for all of four months when it clinched the top honors at Green Chile Cheeseburger Challenge in 2012. Consider that for a moment. With fewer than 120 days in business, Rockin’ BZ bested a dozen seasoned competitors to earn the most coveted culinary title in New Mexico. That speaks volumes about its award-winning green chile cheeseburger. Never mind that the trophy was grievously misspelled (chili), a travesty which caused a bit of a stir among prideful New Mexicans. In 2013, the Alamogordo restaurant was awarded second place in the competition and in 2014, it finished fourth.

Rockin’ BZ’s win at the Green Chile Cheeseburger Challenge isn’t the burger emporium’s sole brush with fame. In 2016, Spoon University, an online lifestyle presence, selected Rockin’ BZ as New Mexico’s representative in its compilation “Where to Get the Best Sandwich in Every State in America.” Spoon University noted “Rockin’ BZ Burgers have all your green chile needs covered with their New Mexico State Fair award-winning burger.” Also in 2016, my blogging buddy Melody K. described Rockin’ BZ’s burgers as “perfection” in her outstanding review. In USA Today’s “Top Ten” popular vote feature, readers selected Rockin’ BZ in 2016 as the tenth best green chile cheeseburger in the Land of Enchantment.

Owned by the father and son duo of Rusty and Cody Childress, Rockin’ BZ is named for Rusty’s father-in-law Buz Zink’s cattle brand. A true Southerner (Southern New Mexico, that is) Rusty uses only green chile from Young Guns in Hatch. Buns are freshly baked. Rockin’ BZ employs a true “have it your way” menu with dozens of free and “for a pittance” toppings available. Burgers are available in quarter-pound, half-pound and three-quarter pound options. An easy to complete order form is available on a round table just in front of the counter where you place your order. The form ensures your burger will be prepared to your exacting specifications. If the number of options are too much for you, Rockin’ BZ has a no-hassle option. Just order “The Champ,” the Green Chile Cheeseburger Challenge winner, which is constructed with a half-pound beef patty, grilled onions, American cheese, green chile, lettuce and tomato. A Half Champ is available for diners with smaller appetites.

That Rockin’ BZ Burger would be one of the stops we’d make during our stay in Alamogordo was a no-brainer. That decision was solidified in Cloudcroft when we ran into a young airman stationed at Holloman Air Force Base who told us about the fantastic burger he’d enjoyed an hour earlier at Rockin’ BZ’s. His ardent enthusiasm for the burger would have convinced a vegetarian to try one. When we arrived at the restaurant we found that almost all of the two dozen or so patrons enjoying a late lunch were also stationed at Holloman, some fifteen miles away. You can trust America’s best and brightest to know where to find the best burgers in town.

It didn’t inspire my Kim to have a green chile cheeseburger, however. My Chicago born-and-bred bride doesn’t share my enthusiasm for New Mexico’s fiery pepper blessed burger. That would be grounds for divorce were she not such a wonderful wife. Give her a Philly Cheesesteak any time. The Philly is one of a handful of non-burger options on the menu along with chicken strips, grilled chicken sandwich, hot dogs and corn dogs. Unlike many Philly’s which are served on hoagie buns, this one is served on burger buns. Those buns proved a perfect canvas for one of the most tasty Philly’s we’ve had outside of Philly’s N’ Fries in Albuquerque. This sandwich is brimming with perfectly grilled onions, red and yellow peppers, white cheese and plenty of the best seasoned steak anywhere.

The mad scientist in me resisted creating my own burger (which would undoubtedly have been loaded with nearly every ingredient available). Thankfully The Champ made it easy for me…no hassle, just burger perfection. It takes two hands to handle this behemoth burger. The Angus beef is seasoned nicely, a perfect complement for the Young Guns chile which has some bite (out-of-staters would be reaching for water), but is more notable for its fruitiness and roasted flavor. There’s plenty of green chile on this burger and it’s blanketed by a molten white cheese. It’s easy to see how this fabulous burger earned its Green Chile Cheeseburger Challenge title. What left me scratching my head is how it hasn’t won that title more often. It’s one of the best green chile cheeseburgers I’ve ever had.

I’d be remiss if I didn’t mention just how nice and helpful the staff at Rockin’ BZ Burgers is. Their hospitality and professionalism adds to what is already an outstanding green chile cheeseburger experience. In our discussions with the heroes from Holloman, we were assured great service comes standard at this beloved local institution. Some of them consider Rockin’ BZ Burgers a home away from home with cooking better than they get from mama.

Rockin’ Z Burgers is indeed one rocking joint. With a green chile cheeseburger that’s among the very best in the Land of Enchantment, it’s the pride of Alamogordo and one of many reasons to visit this beautiful desert hamlet.