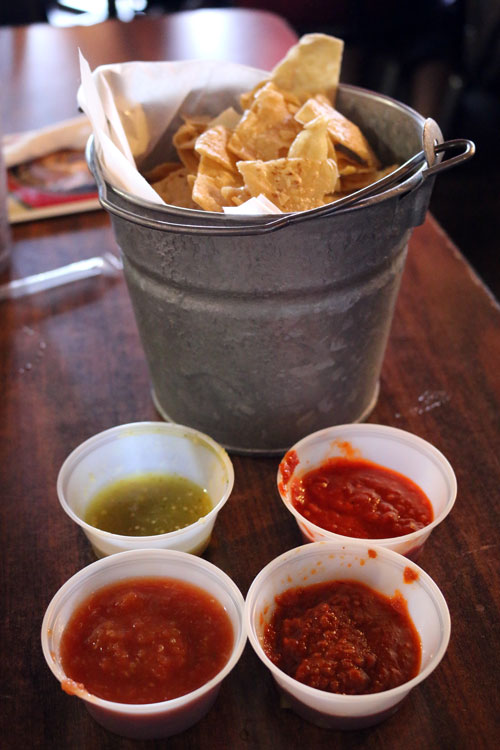 Put a savvy foodie from Las Cruces and a gastronome from Albuquerque in the same room (preferably not a kitchen well stocked with knives) and you’re bound to start a culinary civil war. Such was the case when I worked at Intel with a colleague who was born-and-bred in the City of Crosses. We were both adamant that the cuisine in our half of the state (mine being the upper half) was far superior to cuisine in the other (lower in her case) half. We debated every nuance that made our preferred cuisine distinctive from the other. We argued about the prominence of Mexican and Native American culinary influences, the preferred degree of piquancy in each region, whether or not cumin has any place in New Mexican cuisine, even whether the biscochito can truly be New Mexico’s official state cookie if it’s not as common in Southern New Mexico.

Rather than squabbling like the prickly, contentious British Parliament, we could have spared ourselves hours of rancor by breaking sopaipillas together at restaurants in both Northern and Southern New Mexico. With detente based on a shared meal, we might even have become friends. Think of the missed opportunities to compare the best of the north against its southern counterpart: Rancho de Chimayo in the north and La Posta De Mesilla in the south; Albuquerque’s beloved institution Mary & Tito’s and Las Cruces legend Nellie’s Cafe; and Santa Fe’s James Beard award-winning The Shed with Chope’s of La Mesa. Surely there would have been no winners or losers, just two very satisfied New Mexicans enjoying the best our beloved state has to offer.

The truth is, the two cuisines probably don’t differ enough to warrant a heated debate. There is as much to love in New Mexican cuisine in the North as there is in the South. Moreover, the distinction between the two isn’t usually determined broadly by geographical location, but at a more finite level–by kitchen. In every kitchen across the Land of Enchantment, New Mexicans prepare our beloved cuisine differently…just as they have for generations. Discerning diners should shout “Viva La Differencia” with mucho gusto. What could be more fun than exploring the subtleties of New Mexican cuisine prepared with just a delicate gradation of difference? Why, you could create a blog dedicated to such a delicious quest.

Since January, 1996, Andele Restaurant, located in the heart of historic Mesilla just south of Las Cruces, has been luring hungry guests with fragrant bouquets that waft like a siren’s call across the length and breadth of the L-shaped complex that encompasses the suites at 1950 Calle del Norte. Andele is on every short list of “best restaurant” listings you’ll find for the Las Cruces area. As if lovingly tending to more than 10,000 square feet and offering an immensely popular restaurant isn’t enough, the Andele brand includes catering, take-out, banquet service, a mercado and tortillaria and the production and distribution of award-winning specialty salsas (both the traditional Andele brand and Ol’ Gringo have won earned “best in New Mexico” distinction on multiple occasions at the New Mexico State Fair).

The most recent addition to the Andele Restaurant family is Andele’s Dog House across the street from its sprawling sibling. Andele’s Dog House shares much of its elder sibling’s menu with a spattering of new favorites such as Mexican hot dogs. The Dog House has a relaxed cantina-like vibe, making it the perfect venue for eating dogs in the company of your own four-legged children. It isn’t just a fall-back when lines snake around Andele Restaurant. Al fresco dining is a popular draw as is the enclosed patio where several flat screen televisions are tuned to sporting events. Andele’s Dog House was named one of the Land of Enchantment’s ten best hot dog joints by “Best of New Mexico,” a very entertaining site dedicated to the greatness that is our state.

If you’re not already acquainted with the menu at the main restaurant, you’re well advised to peruse it at length before your visit to the Dog House. It’s a multi-page menu that warrants your rapt attention lest a post-prandial review reveals something you should have ordered. Section headings include burritos, soups and salads, a la carte and sides, appetizers, house specialties, combination plates, Platos Mexicanos, Steak and Chicken, Burgers and Sandwiches, Drinks, Desserts and of course, Hot Dogs. The house specialty, by the way, is the Tacos Al Carbon (white corn tortillas topped with flame-broiled beef, pork or chicken with sundry ingredients).

In her fabulous review of Andele, my blogging buddy Melody K. practically had us drooling at her description of Andele’s complimentary salsa bar. We finished off two bucketfuls of chips by the time we were done, enjoying the not so subtle properties of each incendiary salsa: chipotle, traditional, chile de árbol, and a tomatillo and jalapeño salsa. My Kim advised me to include a disclaimer every time I indicate a salsa isn’t especially piquant. She reminded me that my assessment of piquancy is at the level of calling molten lava merely warm. Her personal Scoville scale indicated the chile de árbol salsa was tongue-searing, eye-watering and nose-clearing. Piquancy not withstanding, all the salsas are excellent. My favorite is the chipotle with its distinctively smoky flavor.

In fitful acts of desperation, most of us will admit to picking up a rotisserie chicken from our neighborhood grocery store. Never mind that it’s probably sat out as long as a hot dog at an all-night quickie mart. After vigorously interrogating our server, my Kim decided Andele’s rotisserie chicken was probably unlike what she’d find at a grocery store. Andele seals in pure deliciousness by marinating the chicken in their fabulous (no cumin) red chile. The result is one of the very best rotisserie chickens we’ve ever had. Not only does the incomparable flavor of the red chile penetrate deeply into the chicken, the rotisserie process somehow manages to keep the chicken moist and tender. Rotisserie chicken is available in half or quarter chicken sizes served with corn tortillas and garnished with wedges of avocado and tomato.

In recent years, the Sonoran Hot dog has gone from being the definitive food of Tucson, Arizona to being a popular offering in the Land of Enchantment. While the Dog House menu calls their version a Mexican Dog, it doesn’t differ much from the kennel full of Sonoran hot dogs we’ve had in Tucson. What is a Mexican hot dog. I’ll let the Dog House menu describe it: “Well, it’s not a Chihuahua standing in the sun! This is unlike any hot dog you’ve ever had. We start with a grilled, bacon-wrapped all-beef frank, serve it in a specially baked bun, and then top it with pinto beans, grilled onions, diced onions and tomatoes, plus jalapeno mayonnaise, mustard,ketchup, jalapeno salsa.” By any name, this is a superb hot dog, albeit just a bit tough to eat if you can’t crane your mouth like a baby bird being fed. One Mexican hot dog is roughly the size of two Tucson-sized Sonoran hot dogs and nearly as delicious.

I’ve long contended that no one prepares baked potatoes as well as Mexican restaurants. The Dog House’s baked potato, adorned simply with a couple dollops of sour cream and slathered generously with melting butter, is a great accompaniment for any entree. The potato is soft without being mushy and about the size of a softball. It’s the type of potato prepared so well that you’ll even finish off the skin (which some claim is really the most nutritious part of a potato anyway).

Had my Southern New Mexico nemesis taken me to Andele’s Dog House, I would certainly have conceded that this magnificent milieu in Mesilla is one of the very best New Mexican-Mexican restaurants in the Land of Enchantment. Not just Southern New Mexico! The entire state!