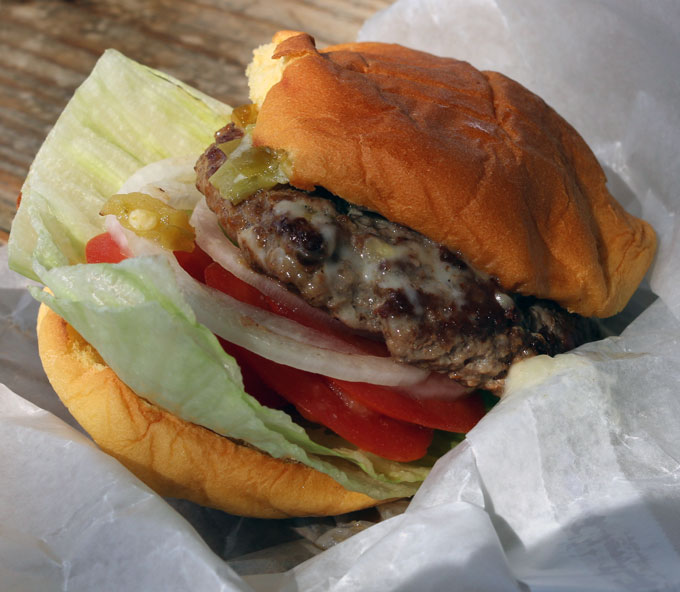 If it seems there’s a glut of restaurants brandishing a much-hyped and often self-glossed as “best” version of New Mexico’s fabled green chile cheeseburger, it won’t surprise you to read that yet another purveyor of the Land of Enchantment’s sacrosanct sandwich entered the fray in January, 2014. What might surprise you is its most worthy motto and raison d’etre: “Dedicated to the preservation of the original green chile cheeseburger.” Just what exactly does that mean?

Despite its “mission statement,” the Shake Foundation isn’t based solely on green chile cheeseburgers as proffered throughout the Land of Enchantment, but also on founder-owner-chef Brian Knox’s boyhood memories of eating cheeseburgers in Milwaukee, Wisconsin. Milwaukee, as burgerphiles everywhere know, is famous for slathering its burgers–both bun and beef–with butter: lots of gooey, unctuous, calorific butter. Milwaukee’s butyraceous burgers are the quintessential five napkin (or more) burger.

For nearly three decades, the name Brian Knox has been synonymous in Santa Fe with fine-dining. Prior to launching the Shake Foundation, Chef Knox owned and operated Aqua Santa, a contemporary American restaurant which helped pioneer the city’s slow-food movement. He’s been wanting to make high-quality burgers widely accessible and affordable in a fun and welcoming venue for several years. The Shake Foundation is the culmination of those dreams.

Built on a site which for fifty years housed a gas station, the Shake Foundation isn’t much bigger than a roadside stand, but offers an ambitious menu belying its Lilliputian size. This burger hop is strictly a walk-up operation with several picnic tables for sitting. A number of stately deciduous trees provide seasonal shade and help block New Mexico’s winds.   Heavily trafficked Cerrillos is scant feet away from the restaurant, but you don’t get the sense of being “in town.”

Burgers are the featured fare: cheese burgers with or sans green chile and the classic burger, both available as singles or doubles. A number of free and optional toppings are available, the latter including such revolutionary items as whipped lardo (seasoned, cured pork fat), house-brined pickles and jalapeños and garlic mayo. The menu also offers a turkey burger, a portobello burger and a New Mexico Shepherd’s Lamb Burger as well as a fried oyster sandwich with red chile mayo. Green chile stew and a Caesar salad round out the food menu.

31 March 2014: If for no other reason than we’re in America and we like to super-size our burgers, you’ll want to order a double meat burger. The single is all of three ounces (just an ounce shy of the quarter-pounder), but by all appearances doesn’t look much bigger than some “sliders.” A better reason to order a double meat burger is the beef’s healthful deliciousness. The beef blend is a combination of sirloin and chuck with no hormones or antibiotics. All burgers are cooked to medium unless otherwise requested. True to Chef Knox’s heritage, buns are buttered though not dripping in butter as you’d find in Milwaukee.

The menu warns that “Our New Mexico green chile is hot!” That’s hot with an exclamation point. Frankly, most New Mexicans won’t wince at its piquancy (or relative lack thereof), but we’ll certainly appreciate its roasted flavor and fruity nuances. A few strips of bacon are a perfect, salty complement to the green chile as is the rich, gooey Monterey Jack cheese. Even with a double, you might want to order two of these burgers. With a bun not more than four inches around, they have a subliminal effect of appearing small even though with double meat, they tower above most chain burgers. The Shake Foundation’s burgers are (usually) juicy and absolutely delicious, well worthy of New Mexico Green Chile Cheeseburger Trail consideration.

17 September 2016: Having lived on the Mississippi Gulf Coast for nearly eight years, I consumed oyster po’ boys by the boatful, my favorite being the behemoth bivalve sandwich from Cafe Maspero in New Orleans. In New Mexico, it may be easier to find a prize pearl inside an oyster than to find an outstanding oyster po’ boy or sandwich. The Shake Foundation’s version, a Gulf Coast meets the Land of Enchantment sandwich may be changing that with its fried oyster sandwich with red chile mayo. The oyster is moist and delicious and the red chile mayo is slathered on generously. The combination of flavors is a winner.  Alas, my second fried oyster sandwich was as dry as Ben Stein’s deadpan delivery.  As good as my first fried oyster sandwich was, this one quickly erased the pleasant memories of that magical first.  Note: On occasion, Santa Fe’s Bang Bite Filling Station constructs an even more amazing oyster po’ boy.

17 September 2016: From 1983 through 1993, a tiny restaurant on Cornell Avenue named Sheepherder’s Café made eating lamb not only fashionable, but immensely satisfying and incomparably delicious. Its specialty was the Lamburger, a thick, charbroiled lamb patty served on a sourdough bun with homemade salsa. Since its much lamented closure, I’ve sought to replicate that uniquely wonderful dining experience to no avail. That is, until we discovered the Shake Foundation’s New Mexico Shepherd’s Lamb Burger, a burger I topped with Monterey Jack cheese and green chile. If taste buds have a memory, my first bite of this super-sized slider transported me back to the Sheepherder’s Cafe and every bite thereafter reinforced the experience. This burger quickly became my second favorite burger in Santa Fe behind only the Santa Fe Bite‘s green chile cheeseburger. It’s an amazing burger! That is, it’s an amazing burger when it’s made with double meat. To taste and appreciate that meat, you’ll have to strip the burger of the ripe, red tomatoes and crisp lettuce. Even then, it brought to mind the Wendy’s commercials of yore which lamented “where’s the beef.”

Hand-cut shoestring fries, available in single or double portions, are a nice accompaniment to your burgers. Made from potatoes grown in Colorado, they’re fried to a crispy, but not potato chip-like texture and don’t require desalinization as do so many other fries. They’re also not quite as greasy as conventional fries. Being shoestring thin means they’re also not as moist as other fries.

True to the name on the marquee, shakes are a point of pride. Rightfully so! These are not the cloying, syrupy, made-from-a mix shakes the chains dispense. You can actually taste the ice cream with which these shakes are made…and it’s great ice cream. It’s a rich, creamy, smooth ice cream available in “viva la differencia” flavors such as lavender and piñon caramel. Even better is the Mexican Chocolate shake which my Kim calls the best shake she’s ever had. Unless you’ve got the suck power of a vacuum cleaner, you’ll need a spoon because a straw just won’t cut it. Nor do those environmentally sound paper straws, dammit!

3 November 2019: If it’s true that a picture conveys a thousand words, the image that probably came to mind when you espied the spicy fried chicken sandwich (above) may have been of crawling along a wind-blown and sandy desert…and if you think the picture conveys how dry this chicken sandwich was, imagine eating it.  My friend Foodie Star might have described it as being fried to within an inch of its life.  Seriously, there was very little moistness left inside.  Not even the green chile mayo and brined pickles helped.  Had we not been on the road, this is one we would have sent back.

It could be debated that the Shake Foundation isn’t as much about “the preservation of the original green chile cheeseburger” as it is taking it to a new level with the type of creativity which made Chef Knox one of Santa Fe’s most acclaimed culinary minds.