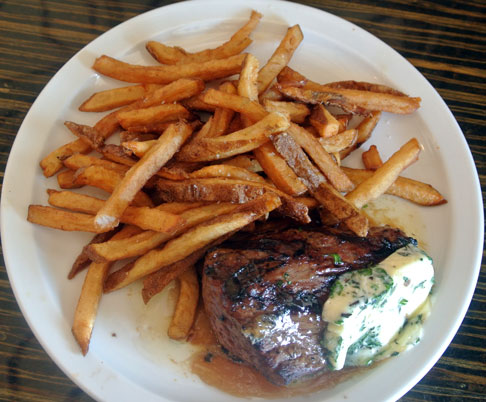 “Gravy is the simplest, tastiest, most memory-laden dish I know how to make:
a little flour, salt and pepper, crispy bits of whatever meat anchored the meal,
a couple of cups of water or milk and slow stirring to break up lumps.”
~Dorothy Allison, American writer

Some would say that the discovery (invention?) of gravy is one of mankind’s crowning achievements. Others would deride it as the work of the devil, likening gravy to a beguiling temptress which bends the will to its bidding. Dolly Parton acknowledges that “every single diet I ever fell off of was because of potatoes and gravy of some sort.” It’s no surprise that similar to many of the world’s best tasting foods, gravy is generally fattening. Most commonly, it’s the byproduct of pan drippings and juices derived from cooking meat.

Some among us who consider gravy one of mankind’s most glorious achievements (even as it flows through our veins) may salivate involuntarily when turning onto Central Avenue and espying a large sign reading simply “Gravy” subtitled with the three events with which gravy goes so well: “breakfast, lunch, dinner.” One of the most eagerly anticipated restaurant launches in recent memory, Gravy is the brainchild of the partnership which in 2011 opened Holy Cow, one of the city’s most celebrated purveyors of burgers.

Gravy is located at the site of the former site of Milton’s, a long-time East Downtown institution. Despite nearly two years and more than half a million spent in renovating the edifice, architectural constraints make it nearly impossible not to hearken back to the days in which the facade housed a Denny’s Restaurant. That’s not to say the renovation was like “putting lipstick on a pig.” It’s just that there’s only so much you can do with a building originally constructed in 1964.

What you can do, however, is place a premium on providing an attractive venue for guests. It’s a venue which pays homage to previous tenants in a retro-modern diner fashion without a thematic regression to the 60s. The exterior (which had probably been neglected for years) has a pristine appearance; even the river rock facade now has a polished look. The interior received similar attention though the sound system’s bassy speakers have a one-note (boom, boom) cacophony that makes discourse at conversational tones a challenge.

Where Gravy will shine most is with a diner menu that bespeaks of inventive and traditional diner foods, many prepared with a New Mexico twist while others offer a contemporary interpretation of classic dishes. Diner foods generally translate to comfort foods such as meatloaf, chicken fried steak, fried chicken and beef stroganoff, all staples of Gravy. Salads range from the classic chopped salad to the lobster-avocado salad. You can start your morning off with such eye-opening favorites as biscuits and gravy or opt instead for a breakfast pot pie. Nine types of pancakes grace the breakfast menu.

13 December 2014: In the tradition of diners everywhere, milkshakes are prepared to order for kids of all ages. These aren’t the milkshake machine variety shakes proffered at chain restaurants. The chocolate-cherry shake, for example, is made with real ice cream, chunks of adult (dark) chocolate and a multitude of maraschino cherries, not some artificial cherry-flavored sweetener. It’s served cold the way shakes used to be and should always be made.

13 December 2014: One of the more contemporary menu items offered at some diners is steak frites. While some might decry steak frites as just a fancy name for steak and French fries, in France there are restaurants whose entire menu is comprised solely of this sacrosanct dish. Gravy’s rendition is a marinated top sirloin topped with a maitre d’ butter served with hand-cut fries. At medium-rare, the steak oozes beautiful pink juices. The maitre d’ butter, a compound butter with parsley, adds a complex layer of flavors and a rich unctuous quality that enlivens the meat. The fries are just a bit on the flaccid side and are prepared at just past the stage at which they’re golden hued.

13 December 2014: There’s a reason restaurant critics don’t typically review new restaurants until restaurateurs have had the opportunity to iron things out, a process that sometimes takes several weeks, if not months. Virtually all restaurants experience “Murphy’s Law-esque” start-up issues that belie the countless hours of planning and preparation for a smooth launch. We visited Gravy scant days after its opening and suffered through a number of issues that detracted from the enjoyment of our meal, however, the restaurant’s seasoned ownership makes it very likely these issues will be resolved in short order and Gravy will more than live up to the hype it’s received.

22 August 2015: We waited nine months for a return visit and while the service issues we endured during our inaugural visit were largely resolved, we experienced mixed results with what we ordered, thoroughly enjoying a couple of items and sending two other items back. There are never any guarantees that every item at every restaurant will appease every diner, but the items we sent back were praised highly on other online forums and frankly, aren’t that difficult to prepare well.

22 August 2015: The Air Force sent Kim and I to Mississippi in 1987, the year in which Fannie Flagg’s memorable Fried Green Tomatoes at the Whistle Stop Cafe was published. Fried green tomatoes are a Southern staple, as part of the culture as good manners. Before we even read the book or watched the movie, we were besotted by tangy fried slices of succulent fresh-from-the-garden green tomatoes. Though restaurants throughout the fruited plain jumped on the fried green tomato bandwagon, only in the deep south have we enjoyed them. Gravy’s rendition takes a contemporary approach to the sacrosanct fried green tomato, topping each slice with pimento cheese, chopped pork belly and tomato jam, negating the need for sauce of any type. Though not quite “Southern,” these are very enjoyable. The tomatoes are indeed green with nary a touch of mushy yellow or worse, red. They’re fried lightly and pair well with the unique and clever toppings, especially the sweet tomato jam which nicely contrasts with the savory tartness of the green tomatoes.

22 August 2015: In 2014, I spent a week in Charleston, South Carolina, a city widely regarded as one of America’s culinary treasures. At the James Beard award-winning Hominy Grill, I had the tremendous pleasure of partaking of the Charleston Nasty Biscuit, a beauteous behemoth in which sausage gravy is slathered on a mile-high biscuit bisected by a Southern-fried (in a skillet) chicken breast topped with shredded Cheddar cheese. It’s one of the very best sandwiches these lips have ever enjoyed. Gravy’s breakfast sandwich takes the term “nasty” as in awesomely big to another level. It should come standard with an angioplasty. Messily nestled within a UFO-sized biscuit are a fried chicken thigh topped with bacon, a fried egg and as much gravy as the Rio Grande has water. On paper it sounds deliciously decadent, an indulgence not for the faint of heart. Alas, the gravy lacked personality (a cardinal sin in a restaurant named Gravy) and would have benefited greatly from sausage. The chicken was tough, rather heavily breaded and lacked seasoning. We tried our darnedest to enjoy this beast of a biscuit sandwich, but couldn’t get past its shortfalls.

22 August 2015: The Gravy menu features a number of unique pancake offerings heretofore unseen in these parts. The triumvirate, called “The Pancake Flight” includes a red velvet pancake, a cinnamon roll pancake and a pineapple upside down pancake. Each is about the size of a manhole cover and unless you’re a lineman for the UNM Lobos is easily large enough to share. The pineapple upside down pancake is terrific with tangy pineapple chunks providing a tangy contrast to the pancakes (which would have benefited from real maple syrup).

Gravy is a bit of an anomaly to us. The dishes it does well, it does very well, but shortcomings in other dishes are rather glaring. It’ll take time and a few more visits to find the sweet spot, a complete meal in which our enjoyment crosses several dishes.