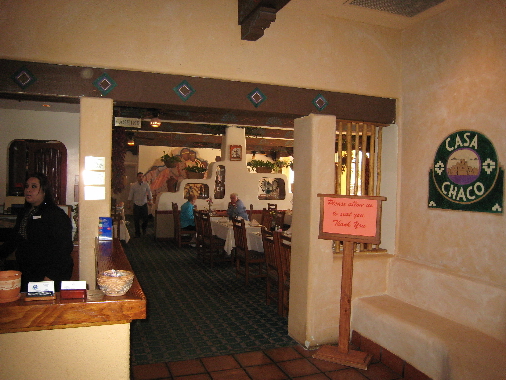 In A.D. 850, the ancient Anasazi began building the pueblos archaeologists posit were the hub of an ancient culture inhabited in its heyday by more than 5,000 people.

By A.D. 1000, Chaco Canyon was the flourishing heart of religious and governmental life for an advanced culture that has since been assimilated by Native American pueblos dotting the Rio Grande valley. Using remote sensing technology, archaeologists discovered roads radiating from Chaco Canyon like the spokes of the wheel, connecting the canyon with almost 100 Chacoan outliers.

In modern-day Albuquerque, the rambling Hilton hotel has also become a hub of activity (more than 27,000 square feet of flexible meeting space) and like Chaco, is on the intersection of heavily traversed thoroughfares. It’s perhaps only fitting that one of its two signature restaurants is named for the “ancient ones.”

Casa Chaco is tastefully decorated with Native American art, including the full regalia of Indian women and children. On some nights, the dining experience at Casa Chaco is further enhanced by the mellifluous presence of Hector Pimental and the soothing stylings of his guitar.

Similar to the Rancher’s Club, its sister Hilton restaurant, Casa Chaco places you in the lap of luxury with attentive service and comfortable, stylish seating. Unlike at the Rancher’s Club, you don’t have to take out a loan in order to dine well on high-end cuisine. As far as fine-dining goes, it’s surprisingly reasonably priced, especially considering the menu’s innovation and some of the excellent food.

The green chile stew features slow-simmered pork, potatoes and vegetables with local green chile that has a pronounced “just off the comal” taste. Also prevalent in this signature New Mexican favorite are the spices Mexican oregano (distinctly different from its Italian counterpart) and cumin. In the right proportion, these spices provide an invigorating taste sensation and Casa Chaco almost gets it just right. A bit too much cumin and not enough piquant green chile render this green chile stew passable.

Lettuce wraps in a restaurant renown for its Southwestern fare makes for an intriguing appetizer. These are not your standard P.F. Chang’s lettuce wraps with their pseudo-Chinese cloyingness. These wraps scream Southwestern with a smoky, shredded pork (not unlike carne adovada) ameliorated with a mango-chipotle sauce and petite cucumber salad all to be enveloped by fresh, crisp bib lettuce.

Several steaks and chops decorate the eye-catching menu. A beef tenderloin entree features certified Angus beef grilled with a reduced blue mountain coffee and molasses demi-glace. Tender was this tenderloin, almost tender enough to be cut with fork alone. The coffee cuts the sweetness of the molasses just enough to render this carnivore’s creation ever so slightly sweet so that the beef’s natural taste stood out. A nice accompaniment to the beef tenderloin are the restaurant’s garlic sweet mashed potatoes which beautifully meld savory and sweet tastes.

A less expensive, but no less beautiful beef is the carne asada, an ancho-lime marinated tender flank steak grilled over an open flame and served with a chimichurri sauce (chimichurri is generally made of finely chopped herbs mixed with vinegar and spices). It’s reminiscent of the way in which Argentineans prepare beef.

Although several dessert items are available, the piece de resistance has got to be the Mexican chocolate flan which features a creamy, bittersweet chocolate that positively melts in your mouth. It’s as good a flan as you’ll find in a city in which outstanding flan is more common than mediocre flan.

While three dinner experiences at Casa Chaco have been satisfying, if not very good, a lunch excursion in April, 2007 with colleagues was almost nightmarish–hopefully an anomaly and not typical of the restaurant’s lunch performance. One colleague found lipstick on his water glass (he’s hoping it came from a good looking woman) while another sent back her green chile stew because the potatoes included “warts and blemishes” which should have been cut out.

My own lunch experience was also disappointing. A black and bleu burger ordered medium arrived at our table at least medium well done if not well. There was no pinkish insides to this burger and absolutely none of the juiciness that typifies a great burger prepared medium. It reminded me of the type of remains archaeologists might unearth at an ancient dig site.

It’s not uncommon–even among great restaurants–for lunch not to receive the same attention as does dinner. It’s also not uncommon for paying customers to use lunch as a “rehearsal,” a test to find out if a dinner visit is warranted. Casa Chaco should remember this.