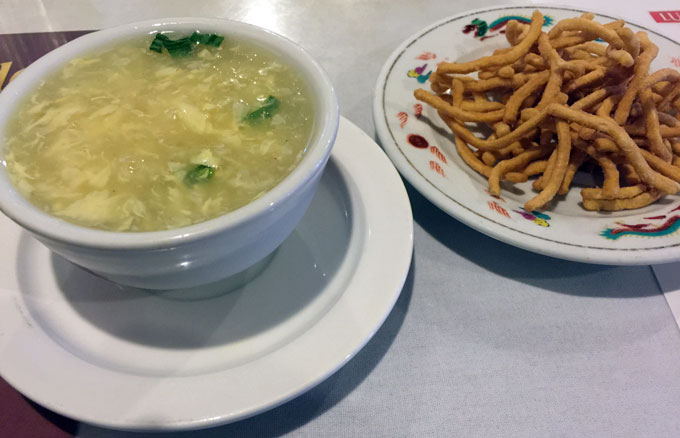 Hungry sojourners venturing east on Menaul between Wyoming and Eubank will discover two of the dining options on this stretch are among Albuquerque’s elder statesmen in the Duke City’s Chinese restaurant community. You’ll first espy Ho Lo Ma, a venerable institution launched in 1972 and well on its way to a half-century of serving the Duke City. A couple blocks later lies a comparative newcomer named ABC Chinese which has been in business only since 1988. Both restaurants are anachronisms with many of the stereotypical trappings that typified Chinese restaurants in the 1960s and ’70s. Though showing their age, both have legions of devotees. Both also have their vocal detractors.

Among the latter are a persnickety bunch who can’t get past the timeworn ambiance at ABC Chinese. Read their comments on Yelp and TripAdvisor and some commenters would have you believe you’ll be dining in the restaurant equivalent of Oscar Madison’s bedroom. On the same crowd-sourced review sites, you’ll read glowing praise from diners whose sole focus is the menu, its authenticity, variety and the deliciousness of the Cantonese specialties. As is usually the case, the truth lies somewhere in the middle. The carpeting at ABC Chinese may be a bit threadbare and its walls may not have a fresh coat of paint, but if your sole interest is the pursuit of good, solid Chinese food, you’ll find it here.

You’ll especially find it on the blue menu. “Blue?,” you ask. Of course, you’re aware that the simple word “blue” has connotations beyond being a color on the ultraviolet spectrum. You know it’s used to describe melancholy or depression (as in a blue funk or feeling blue). You probably know that blue is also used to connote something that’s off-color, profane or indecent. If you dine frequently at the ABC Chinese Restaurant, you’ll certainly know that blue means something with a very positive connotation–a menu which features truly authentic Hong Kong-style Chinese dishes. Diners interested in that authenticity don’t bother with the red menu which is replete with all the familiar favorites (can you say “Americanized”). The blue menu is for more adventurous diners and patrons of Chinese descent.

That blue menu has achieved not only a strong following among diners who frequent ABC Chinese, but a certain notoriety in print and online mediums. In his terrific 2004 tome New Mexico Chow, author Scott Sharot mentioned only two Chinese restaurants–Ming Dynasty and ABC Chinese–among the 75 or so restaurants he chose to write about. His profile extolled the delicious offerings on the blue menu. In 2013, the real estate blog Movoto published its list of “15 Albuquerque Restaurants” that “Will Blow Your Taste Buds Out of Your Mouth.” One of those 15 was ABC Chinese about which Movoto wrote “Sure, you can order as much General Tsao’s chicken as you want at ABC Chinese. Nobody’s going to judge you for that. But you might get a sidewise glance if you don’t get something off the blue menu.”

That last sentence–you might get a sidewise glance if you don’t get something off the blue menu–speaks volumes about the clientele at ABC Chinese. It’s a restaurant frequented by savvy diners who won’t settle for candied (sweet-and-sour) meats when they can have Five Spices Lamb Pot. It’s also a restaurant frequented by diners of Asian descent who definitely won’t order sweet-and-sour or any other Americanized items. ABC Chinese makes no claims to gourmet Chinese offerings nor does it offer nouvelle fusion items. It proudly serves Cantonese cuisine which for about the first century or so of Chinese food in America was the only type of Chinese food you could find across the fruited plain. There was no Szechwan, Hunan, Mandarin or Taiwanese cuisine anywhere.

The red menu does include a dozen Korean dishes including Bul Go Gi and Dock Jim Chicken, but for the most part, dishes are the familiar standards that may have been considered exotic only back when all Chinese food was considered exotic. Exceptions include duck prepared four different ways. “Happy Family” and “Golden” dinners are priced at a per person rate and include appetizers and entrees. The red menu also offers a number of combination plates, all of which include an egg roll and fried rice. Within the red menu, you’ll also find a luncheon menu listing more than twenty dishes, the most expensive of which is south of seven dollars. You’ll be amazed at the “back to the past” prices on both menus.

2 June 2004: My inaugural visit left me with the impression there would be many more visits though over the years, those visits have been few and far in between. Blame that on my inability to remain monogamous when it comes to restaurants of any genre. While my less adventurous dining companion ordered Bul Go Gi from the red menu, my blue menu choice was deep-fried chicken with bean curd sauce. When done right, that sauce is a perfect melding of garlic, ginger, rice wine, coriander, soy sauce, peppercorn oil and numerous other ingredients which meld incredibly well. ABC Chinese does it right! The fried chicken itself is poultry perfection, a half bird with succulent bone-in white and dark meats upon which is slathered just the right amount of the bean curd sauce.

20 April 2006: During my second visit, I had the pleasure of introducing Steve Coleman, my friend and fellow online restaurant blogger to ABC Chinese. A Chinese food aficionado, Steve thought it at least equal (maybe better) to the best Chinese restaurant in his stomping grounds of El Paso. It goes without saying that Steve ordered from the blue menu. His assessment: “In my opinion, though, when restaurants such as ABC offer an opportunity that comes close to an authentic Chinese experience it should be seized upon, especially in the Southwest where gloppy and gooey Americanized Chinese food predominates.”

20 April 2006: One of ABC’s specialties is juke (sometimes spelled “jook” and otherwise known as “congee” or even “gruel”), a rice porridge you’ll often find on dim sum menus. ABC offers eight different jukes including a delicious ginger and scallion juke that exemplifies why rice porridge is such a popular comfort food in China. Juke is soothing on the stomach and is particularly comforting on cold winter nights, but it’s great at any time. In and of itself, juke can be a rather bland dish, but when adulterated (the roast duck with black preserved egg will be next), you’re in for a surprisingly good meal.

20 April 2006: Hot pots are another ABC specialty where they may be better than at any Chinese restaurant in Albuquerque. In Asian countries, hot pot dishes are communal dishes served most often in the winter (trust me, they’re great any time of year). ABC’s hot pot dishes are imbued with a garlic and ginger sauce that also takes on the flavors of accompanying meats and vegetables. My early favorite is the b-b-q pork with oyster pot which blends the briny seafood taste of succulent oysters (cooked over low heat for a long time to create what is essentially a condensed oyster flavor) with slightly sweet Chinese style barbecue pork swimming in the aforementioned broth along with scallions, bak choy and other vegetables.

6 April 2016: Among the noodle dishes on the menu is one called Singapore Vermicelli which includes shrimp. My server confirmed this is a curry dish, one more often called “Singapore Noodles” in other Duke City Chinese and even Vietnamese (May Café’s version is wonderful) restaurants. Though an asterisk on the menu indicates the Singapore Vermicelli is spicy, it lacks the piquant personality found on a similar dish at Budai, China Best or even Jinja. You can remedy that with a spoonful or five of the chili sauce. The noodles, shrimp and vegetables on the dish are expertly prepared and the portion size is more than generous.

In the 2016 movie Whiskey, Tango, Foxtrot where New Mexico was portrayed as Afghanistan, ABC Chinese was cast as the Jade Flower, a favorite watering hole and brothel frequented by journalists. When not appearing on the big screen, ABC Chinese is a restaurant many savvy diners really like. As I was explaining to my server that a Vietnamese restaurateur friend considers ABC Chinese the best Chinese restaurant in town, a visitor from Santa Fe chimed in with “it’s the best in New Mexico.” Find out for yourself why so many diners are passionate, one way or another, about this venerable gem.