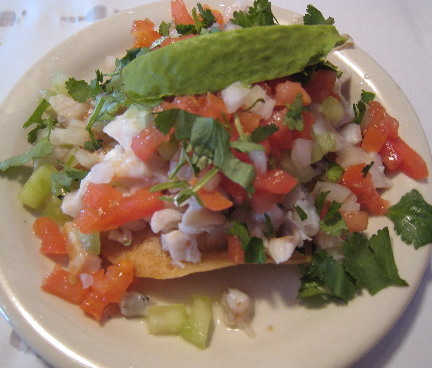 Mexico’s Sea of Cortez has been likened to an enormous net for its capacity to support more marine life than any other body of water on Earth.  Over 3,000 marine species, including more than 900 species of fish, call its azure waters home.  The bounties of the Sea of Cortez sustained the indigenous tribes of pre-Colombian times and today delight aficionados of mariscos with delicious oysters, clams, scallops and shrimp.  It’s no wonder the Mexican Coast is a favorite destination  of seafood lovers throughout the world.

Situated on the edge of a rocky promontory in the Sea of Cortez is the aptly named Puerto Peñasco which translates in English to Rocky Point.  In recent years, the humble fishing village of Puerto Peñasco has burgeoned into a popular beach resort favored by Arizonans.  It’s only a four and a half hour drive from Phoenix to this mushrooming marine resort.

Puerto Peñasco offers miles of pristine white sand in beaches strewn with millions of tiny shells.  It embraces its visitors in warm waters and gives them respite in comfortable accommodations.

This seaside resort is renown for beautifully plated and fresh mariscos which literally go directly from the nearby sea to the kitchen to your plate.  These mariscos are served by attentive servers amidst spectacular backdrops.

It was with the hopes of recreating a meal on the Sea of Cortez that we first visited Santa Fe’s Puerto Peñasco restaurant.  Considering our landlocked, desert location, that may have been asking a bit much.

Puerto Peñasco is ensconced in a nondescript strip mall on Airport Road which we noticed is increasingly taking on a decidedly Mexican flavor.  Various Mexican businesses serve as anchor tenants for other strip malls.

From its exterior Puerto Peñasco is fairly innocuous with a ubiquitous stucco facade.  Only the restaurant’s name and a boat’s steering wheel on the restaurant’s signage provided any indication that seafood might be served.

Interior-wise, Puerto Peñasco is relatively austere compared to other mariscos restaurants in New Mexico.  It doesn’t subscribe to the template followed by other mariscos establishments and their stereotypical nautical themed ambiance.

Instead, its sunflower and light pumpkin colored walls are stark save for a couple of framed, vintage style black-and-white photographs of adult beverages.  A map of Mexico hangs on a wall near the kitchen while a flat-screen television competes with tinny speakers blaring with the sounds of Norteño music.

The menu is replete with mariscos, but does not include the wonderfully refreshing aguas frescas and liquados that go so well with Mexican seafood. As you peruse the menu, the accommodating wait staff will deliver a basket of chips lightly dusted with red chile and accompanied by a piquant red salsa and a creamy guacamole based dip.  Both are excellent.

The salsa is redolent with the freshness of cilantro, onion jalapeno and possibly fire-roasted tomatoes based on the light smokiness of this chunky sauce.  What the guacamole based dip lacks in piquancy, it more than makes up for in creaminess and flavor.  It is comparable to the dip offered at Mariscos Costa Azul, another Santa Fe mariscos gem.

Similar to other ceviche dishes in New Mexico’s mariscos restaurants, Puerto Peñasco’s Tostadas de Ceviche fall short of duplicating the freshness and flavor of their counterparts in coastal Mexico.

Still, these tostadas de ceviche are very good, not Sea of Cortez good, but very good for New Mexico.  A light sheen of mayonnaise tops the crispy tostada shell which is topped with ingredients the colors of the Mexican flag: red tomatoes, green cucumber and cilantro and white seafood (shrimp and fish).

Another way to experience the bounty of the Sea of Cortez is with the Mariscada Puerto Peñasco.  Generally speaking, mariscada refers to a Spanish shellfish stew replete with lobster, clams, shrimp and scallops.  Many Mexican restaurants don’t serve this entry as a stew, but rather as a grilled plate of shrimp, octopus, scallops, mussels and more.

Puerto Peñasco’s version follows the Mexican template, serving a net full of delicious seafood on a metal plate.  Your server will offer a jellied heat source (maybe Sterno) to keep your meal warm, but it’s been our experience that it’s not only not needed, it may well dry your meal.

That would be a sin, because the only way to eat this is fresh and moist, just off the grill.  Smear a little of the avocado based dip on a tortilla and scoop in as much seafood as you can and you’re in for some of the very best seafood tacos in New Mexico.  It may even remind you of the taco stand fare on the beaches near the Sea of Cortez.

Landlubbers have several options, too, including quite likely the best Discada we’ve tried (and that includes at Mariscos La Playa and Mariscos Costa Azul) in New Mexico.  Discada is considered ranch food.  It’s simply whatever meats you have on hand prepared over a wood fire.  It’s generally served as a filling for corn tortillas.  Puerto Peñasco’s version is called Discada Estilo Chihuahua, ostensibly because it’s prepared in the style of that Northern Mexican state.

Whatever the derivation of its name, this is a terrific dish–particularly if you love bacon (and most humans are genetically predisposed to do so).  This dish is created with grilled dice beef, grilled tomatoes, onions, peppers (including jalapenos) lots of salty Mexican bacon, and shredded Cheddar and white cheese served on a metal plate.  It’s a mouth-watering entree.

Puerto Peñasco may not look like a seafood emporium, but it delivers where it counts–with delicious bounties of the sea from the Sea of Cortez.

If Puerto Peñasco has a dessert menu it’s probably not often requested.  That’s because next door is Refresqueria Las Delicias, where dozens of frozen concoctions await.  Refreshing treats include paletas, Mexico’s answer to popsicles and they come in flavors you won’t see at Smith’s.  Think mango, passion fruit and even avocado and chile.

Also available is some of the most flavorful, rich and creamy ice cream you’ll find anywhere, again in delectable flavors.  During my forays to Mexico, I heeded the “don’t drink the water” advice given to all visitors, but practically overdosed on paletas and ice cream.