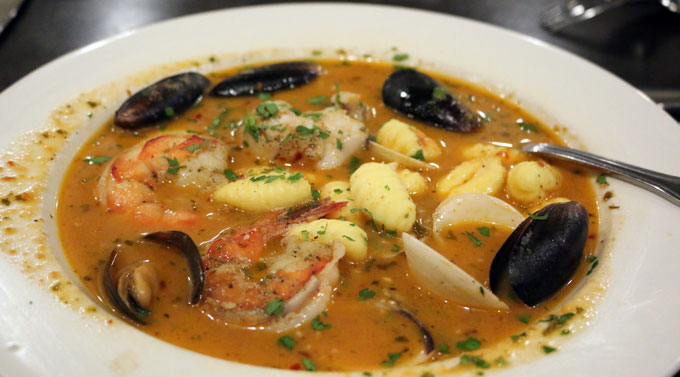 “Italy is an illusion, indeed, a mirage, the stuff of wishes.”
~Mario Luzi

In the 1996 motion picture Big Night, two Italian restaurants across the street from one another operate in diametric opposition to one another both philosophically and in practice. One is enormously successful because it gives customers what they want and expect (even though savvy diners would consider the culinary fare mediocre and uninspired). In the other restaurant, the chef is a perfectionist who will labor all day to create a perfect dish and becomes exasperated when diners don’t recognize the authentic culinary art he creates, preferring “Americanized” Italian food instead.

You might think the American dining public would prefer the latter and reject the former. Our inaugural visit to Piatanzi seems to indicate the opposite may be true in Albuquerque. Our route to Piatanzi took us past an Olive Garden where throngs of patrons lined up to get their fill of mediocre Americanized Italian food. When we arrived at Piatanzi, we practically had our choice of seating. The cavernous restaurant was nearly empty on a Saturday at noon. We could only hope this was an anomaly because diners should be beating down the doors to dine at any restaurant owned and operated by Chef-Owner Peter Lukes.

Chef Lukes and his wife Maggie launched Piatanzi in May, 2014 after a 16-year-stint at Terra Bistro, one of the Duke City area’s very best Italian restaurants, despite violating the three most important tenets of successful restaurants: location, location, location. Situated in the North Valley on heavily trafficked (mostly commuters trying to get to and from the west-side) Alameda, Terra was the very definition of a destination restaurant, one with a strong enough appeal to draw customers from beyond the city’s burgeoning Northwest side.

Piatanzi is much more centrally located than was Terra, although Girard is somewhat less trafficked than Alameda. Located just a few blocks north of the University of New Mexico, Piatanzi occupies the space long held by the Grocery Emporium in a neighborhood that’s more residential than it is retail. No vestiges of the grocery store remain. Piatanzi is a beautiful space courtesy of Maggie Lukes, an über-talented interior designer with a flair for creating spaces which are both comfortably cozy and upscale. A second instantiation was launched in 2015 in a 6,000-square-foot venue that used to house R & S Yamaha motorcycle dealership. The transformation is spectacular!

As much as we’ll miss Terra (and selfishly, our proximity to it), in time the lure of innovative and well-executed Italian cuisine will make Piatanzi a favorite. Where Terra was more formal and upscale, Piatanzi is just a bit more casual and relaxed. While Terra featured a more conventional antipasti, primi, secondi, contorni, dolci format, Piatanzi ‘s focus is on small plates similar to Spanish tapas or Chinese dim sum. Many of the familiar favorites from Terra are still available though scaled down to fit the format.

The dinner menu at Piatanzi is segmented somewhat differently than at Terra, at least in terminology. Starters or appetizers are called “Boccone” which translates to “morsels.” Next on the menu is the “Giardino” or “Garden” section which lists the restaurant’s salads. The “Fattoria or “Farm” section lists small plates of meats and cheeses while the “Mare” section lists seafood items. The “Farina e Acqua which translates to “Flour & Water” is a compilation of pasta dishes. Then there’s the “Pietra” or “Stone” which lists Piattini’s pizza selections. The “Contorni” section lists sides.

The Pièce de résistance is the “Grandi Piatti” or “Large Plates” section of the menu. This section features several items with which we were familiar from having dined at Terra. On his outstanding blog Larry’s Albuquerque Food Musings, my friend Larry McGoldrick, the professor with the perspicacious palate, was especially effusive about the dinner menu which, unfortunately, is not available during the lunch hour. Serendipitously, we did visit on the day Piattini introduced its new weekend brunch menu so even though we missed out on the fabulous dinner menu, there were many terrific options available. Note: Brunch is no longer served on weekends, but you can sleep in and visit for dinner.

Alas not available at Piattini is the warm, fresh, house-made bread right out of the oven which was a staple at Terra. It’s entirely unfair to consider bread from Albuquerque’s artisan Fano Bread bakery a consolation prize since it’s excellent bread, but the bread at Terra was peerless in the Duke City. Still, Fano bread encapsulates all that is wonderful about the staff of life–a hard-crust surrounding a soft, yeasty bread. When dipped into mixture of virgin olive oil and Balsamic vinegar the character of the bread really stands out. If you’re not careful, however, you can easily fill up on bread.

27 September 2014: Time was the only restaurants in which you could find ceviche were either Peruvian or Mexican. Today ceviche can be found in Japanese restaurants as well as avant-garde Italian eateries such as Piatanzi . Each restaurant puts its own spin on a dish which is essentially seafood catalyzed in citrus juices. At Piattini, the Ceviche Italiano ( scallop, shrimp, tuna, tomato, cucumber, lime, parsley, basil) would never be mistaken for the ceviche at a Mexican restaurant where the citrus flavors can be a bit overwhelming. The emphasis at Piattini is on the freshness and natural flavor of the seafood and the way it plays against a lesser citrus influence. The invigorating Italian basil and its peppermint-anise notes is a terrific twist.

27 September 2014: Many adults grow up to rue the wasted years in which foods such as spinach, artichokes, Brussels sprouts, broccoli and asparagus were feared and hated. Fussy eaters as children sometimes become adventurous diners who grow up to love those foods they once avoided like a plague. Asparagus is usually near the top of public enemy number one lists. If asparagus was prepared everywhere as it is at Piatanzi, even persnickety diners would enjoy it. The Asparagi (grilled asparagus, prosciutto di parma, balsamic vinaigrette, Gorgonzola cheese) is an amalgam of ingredients and flavors that complement one another very well though the grilled asparagus is excellent in its own right.

29 July 2016: A cynical quote posits “who needs friends when you have pizza?” During a Friends of Gil (FOG) dinner hosted by Piatanzi, several FOG members, including my Kim, ordered the pizza. Perhaps the aforementioned quote should be reworded “When you have pizza, you have friends” (or vice-versa). Our long-time friend Jim March (Albuquerque’s bartender nonpareil, now plying his craft at Piatanizi) recommended the Salsiccia, knowing Kim is originally from Chicago where the sausage is sourced. The Salsiccia (fennel sausage, roasted peppers, tomato sauce, blended cheeses) is a magnificent pie and the fennel sausage lives up to its name. The fennel imparts an aromatic, mild licorice flavor that marries wonderfully with the pork-based sausage. With a balance of crispiness and pliability, the crust is a terrific canvas for the bubbling cheese blend, roasted peppers and sausage. This pizza belongs on the pantheon of great pizzas along with the Funghi & Tartufo which you’ll read about next.

19 January 2016: There are some ingredients on pizza that, at least for some of us, are solely “supporting cast.” For example, the “more is better” crowd wouldn’t conceive of constructing a pizza whose sole topping is black olives, red onions, green peppers or mushrooms. No, these are complementary ingredients, toppings which go well with pepperoni, sausage, bacon and the like. When my friends Larry McGoldrick, the professor with the perspicacious palate and Dazzling Deanell raved about a “mushroom” pizza, my first inclination was to dismiss it as “boring!” Larry went so far as to declare it the best pizza he’s ever had while Deanell confessed to having dreamed about it. It was a pizza I held off trying until I could share it with Larry and Deanell who’ve never steered me wrong. If anything, they may have undersold it.

Piatanzi’s Funghi & Tartufo, a mushroom pizza is a masterpiece—constructed with a lavish field of criminis from each tapered slice’s triangular endpoint to the cornicione, an Italian term for the “lip” or puffy outer edge of the pizza. A sprinkling of Gruyere, strategically placed scallions and a liberal dousing of truffle oil on a crust that’s crispy or soft where it should be allowed the criminis to shine, imparting their earthy flavor profile in every bite. Truffle oil, the one ingredient surly cur Gordon Ramsey contends no self-respecting chef should have in his or her pantry, imparts an earthy, pungent aroma that complements the criminis very well. Ramsey should try this pizza. This probably isn’t a pizza everyone will enjoy, but if you’re a fan of the fetid, fleshy fungi, you’ll fall for this one.

29 July 2016: There are several items available for dinner that you won’t find on the lunch menu. Since Piatanzi’s launch, Larry has raved to me about several of them, none more effusively than the Pescatore, an entree he ordered the first two times he visited the restaurant. Pescatarians and landlubbers alike will love this dish which just may transport you back to San Francisco where similar dishes abound. Swimming in a delightfully assertive marinara and Pinot Grigio broth enlivened with chile flake are clams, mussels, shrimp, scallops and some of the best potato gnocchi we’ve ever enjoyed. The next time someone laments that you can’t find great seafood in Albuquerque, mention this dish. Words can’t do it justice.

19 January 2016: While not quite as effusively as they raved about the mushroom pizza, Larry and Deanell waxed poetic about the deliciousness of Piatanzi’s calamari. A plateful of calamari ringlets delicately dusted with a rice flour and lightly fried is the antithesis of the fried rubber band (typically denoting overcooking) calamari some restaurants serve. Each ringlet is textbook perfect, described by Larry as “almost butter soft and tender.” Though you can have the calamari with marinara, it’s best with the restaurant’s lemon aioli which lends the qualities of acidity and richness to some of the best calamari you’ll find in the Land of Enchantment.

29 July 2016: Another of the aforementioned foods of my wasted youth are beets which novelist Tom Robbins described as “the most intense of vegetables.” As a child, beets ranked with spinach and verdolagas (purslane) as vegetables to be feared and loathed. Beets were so awful not even our omnivorous scrounging dogs would eat them. In my estimation as an adult, beets can’t be beat. They’re among my favorite vegetables. Only at the phenomenal Blade’s Bistro in Placitas have we had beets as good as the Barabietola (beets, tomato, pickled fennel and red onion, goat cheese, walnuts) at Piatanzi. Your taste buds will do a happy dance over the melange of flavors while your sense of esthetics will appreciate the sheer beauty of this dish…and if you’ve never had yellow beets, you’re in for a treat. Paired with goat cheese, they’re spectacular.

Several years ago, a case could easily be made that great Italian restaurants in the metropolitan area were far and few in between. Restaurants such as Piatanzi have certainly changed that perspective. Piatanzi ranks with the best!