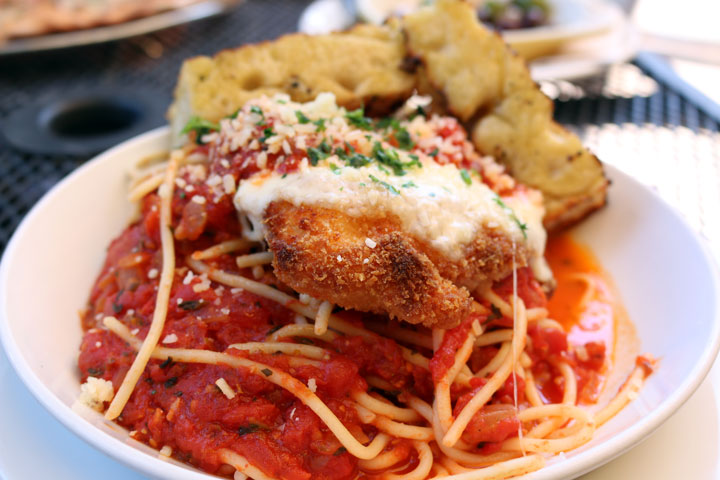 Much thought, deliberation and market research usually goes into the naming of a business, but every once in a while, one linguistic aspect or another isn’t fully explored to the nth degree. Take for example Chevrolet’s problems marketing the Nova in Latin America where the term “no va” means “it won’t go” in Spanish. Even though the Nova sold quite well, the car’s name wasn’t without irony and humor. (Yes, I know the Nova story is an urban myth, but it helps illustrate my point.) Worse, a slogan for Frank Perdue chicken, “it takes a strong man to make a tender chicken,” translated (also in Spanish) as the equivalent of “it takes a sexually aroused man to make a chicken affectionate.”

Obviously, the “Alto” portion of Farina Alto Pizzeria & Wine Bar in Albuquerque is intended to accentuate the “Heights” where the restaurant is located. Alto, after all, translates in both Italian and in Spanish to “high” or “ high up” as in the foothills. Lesser known is the fact that “alto” also translates in Spanish to “stop.” That’s what you’ll read in Spain on octagonal red signs that in America read “stop.” So, Farina Alto not only translates to Farina at the Heights, but perhaps not intentionally to “Farina. Stop!”. Could it be the folks who named Farina Alto knew just what they were doing because stopping at Farina for lunch or dinner is a great idea?

Farina Alto is the younger, more cosmopolitan sibling of Farina Pizzeria, the East Downtown (EDO) area Italian restaurant which took the Duke City by storm when it launched in 2008 and continues to be regarded as one of the Duke City’s best and most inventive pizza restaurants. As with its elder sibling, Farina Pizzeria is owned by restaurant impresarios Pat and Terry Keene, founders and owners of the Artichoke Café, long one of Albuquerque’s most highly regarded fine dining experiences.

Situated in the edifice which previously housed the Pacific Rim Asian Bistro, Farina Alto is easily–at 6,500 square feet–three times the size of the original Farina. Its operating hours are expanded, too, with lunch and dinner served seven days a week. Unlike at its elder scion, Farina Alto’s seating isn’t in personal space proximity and a capacious patio is available for overflow crowds and diners who prefer al fresco dining. Few, if any, vestiges of the Pacific Rim remain. In the area which once served as a sushi prep area, you’ll now find a wine cave and a curing room for the high quality meats and oils used throughout the restaurant’s menu. Alas, only the chef and sous chef enter the curing room so my pleas for a tour were gently rebuffed.

Farina Alto launched on Wednesday, April 24th, 2013 with an expanded menu featuring fresh, locally-grown ingredients. Aside from ingredients of the highest quality, another factor which makes it “Farina-style” is the oven which bakes the restaurant’s signature thin pies in an inferno of heat–650 to 800 degrees. By virtue of their thin crust, these twelve-inch orbs don’t require a lot of oven-time. The thin crust also means you’re likely to see more char on the pizza’s edges and bottom than you would on a thicker crust. The taste of char should be relatively innocuous, even pleasant, but it’s also an acquired taste. If you accept it, if you like it, you’ll enjoy Farina’s pies because char is a flavor.

12 May 2013: Other restaurant standards ported over from EDO include some of the very best meatballs in town. The notion of meatballs at an Italian restaurant conjures images of baseball-sized orbs made from veal, pork and beef and deluged by red sauce. Farina’s meatballs al forno Balsamico are the antithesis of that stereotype. This oven-baked deliciousness features four pine nut studded meatballs per order immersed not in tomato sauce, but in a sweet, tangy, savory Balsamic sauce. The meatballs are accompanied by toasted crostini which you’ll use to dredge up any of the remaining sauce.

12 May 2013: Another EDO favorite which has moved on up to the East side is the pasta e Fagioli, a non-vegetarian bean and pasta soup. Translating simply to pasta and beans, this Italian comfort food standard is simmered until rich, flavorful and redolent with a melange of ingredients working very well together. The pasta e Fagioli is topped with ground Italian basil and served hot. It is available in cup and bowl sizes.

25 January 2015: Since the mid-1960s “invention” of Buffalo chicken wings at the Anchor Bar in Buffalo, New York, there has been no surcease to the popularity of chicken wing pieces that have been deep fried and slathered in a spicy hot sauce. Perhaps to stave of monotony, many restaurants have tried their hand at inventing the “next big thing” in the chicken wing arena. Farina Alto’s effort involves chicken wings and legs rubbed with a red chile flake and thyme seasoning then tossed in an elderberry reduction and roasted in an oven. The result is rather insipid chicken wings whose primary qualities are stickiness and sweetness. The red chile flake is lost in the sweet, lacquered-on reduction. The accompanying celery and blue cheese are a better bet.

3 July 2017: There are over 3,000 different varieties of olives (and that’s a conservative estimate) with flavor profiles that are sweet, sour, salty, bitter and pungent. Though I’ve prided myself on a discerning palate able to detect nuanced differences on many foods, olives have always been one of foods so similar in flavor that I can’t tell the difference–especially when roasted and served in olive oil. That’s how Farina Alto serves them. The oven-roasted Italian olives appetizer includes several varieties, some small, others large, some green, some black and some brown. The Castelvetrano olives stand out, but more for their bright green appearance than their flavor. The generous bowlful also included Gaetas and Ligurias.

In his Local IQ review of Farina Pizzeria, Kevin Hopper wrote of the pizza “each pie’s individual ingredients come together to form a synergistic symphony of flavors.” Each pie is crafted in the tradition of artisan pizzaiolos who know what they’re doing in crafting pies with ingredients so complementary, they dance on all 10,000 of your taste buds with alacrity. Other pizzerias use similar ingredients (for example: pepperoni, salami, mozzarella) to less acclaim, the difference being the high quality of the ingredients used at Farina Alto.

12 May 2013: The carnivore’s choice for pizza is the simply named Carne which does translate to “meat” in both Italian and Spanish. A triumvirate of magnificent meats–pepperoni, salami and prosciutto–share space on a canvas of perfectly charred dough with a lightly applied tomato sauce and mozzarella. Selfishly I love when my Kim orders meaty pizzas on which pepperoni is an ingredient because she doesn’t like pepperoni. Make that she doesn’t like inferior pepperoni. She loved the pepperoni at Farina Alto which means I didn’t get much of it. The Carne is a pulchritudinous pie.

12 May 2013: For turophiles (connoisseurs of cheese), one cheese just won’t cut it. Give us quattro formaggio (four cheeses) when you can or due (two) formaggio if the cheeses complement one another. On the Formaggio di Capra, the two cheeses-farmhouse goat cheese and mozzarella–most definitely complement one another. Other ingredients on this masterpiece are leeks, scallions and crisp pancetta (a salt-cured pork belly meat). The pancetta isn’t nearly as smoky as American bacon tends to be, lending instead an infusion of pure pork flavor. It goes especially well with the smooth, savory-tangy farmhouse goat cheese.

25 January 2015: Several years ago, restaurants across the fruited plain tried to start a “breakfast pizza” trend. They couldn’t pull the wool over American consumers who weren’t fooled by “new Coke” and ultimately weren’t swayed by quiche-like frittata dishes marketed as “breakfast pizza.” Ever the skeptics, we didn’t know what to expect from Pizzeria Alto’s breakfast pizza. As it turned out, it’s truly a pizza in the finest traditions of pizza. It’s also breakfast in that breakfast ingredients (a fried egg over easy, roasted potatoes, apple wood smoked bacon) meld deliciously with the tomato sauce, green chile, leeks and the cheesy due of aged mozzarella and Fontina on a crispy, smoky pizza dough canvas with plenty of the characteristic Pizzeria Alto char. This is a breakfast pizza the way it should have been made years ago!

25 January 2015: Conan O’ Brien recently joked that “a new study says that children are suffering bad health effects from eating too much pizza. The study was explained in a pie chart which children immediately tried to eat.” It’s not only children who partake of too much pizza. When it’s as good as Farina Alto’s Salsiccia (tomato sauce, local fennel sausage, oven-roasted onion, Mozzarella and Provolone cheese) even Job would be tempted to overindulge. True to the pizza’s name, the fennel-enhanced sausage is what makes this pizza special even though some may decry this pie as just a bit salty.

3 July 2017: If you’re not in a mood for pizza, Farina Alto offers a number of pasta alternatives such as spaghetti and meatballs, lasagna and rigatoni. Also available is one of the most pretty-as-a-picture chicken Parmesan dishes in town. By the way, the “Parmesan” portion of the name doesn’t mean it’s made with Parmesan cheese. The dish is instead named after the Italian region of Parma where the dish is said to have originated. This version is fairly typical–a breadcrumb coating, mozzarella and a marinara sauce. Seasoning is where Farina Alto’s version falls short. Our dish lacked the flavor punch from oregano, garlic and other Italian herbs and seasonings that says “I’m Italian.” The dish was even a bit lacking in the salt department.

12 May 2013: Farina Alto’s dessert menu is limited only in the number of options available. The deliciousness is unlimited. Among the most popular options is the gelato, an Italian frozen dessert somewhat similar to ice cream. The difference between gelato and ice cream is subtraction; gelato usually is not made with cream and usually has a much lower fat content. Although other flavor options are available, you can’t go wrong with plain vanilla and not just as a metaphor. The vanilla and the chocolate are exemplars of how good and how pure these two flavors can be, how intensely chocolatey and vanilla pure gelato can be. The gelato is served with a chocolate biscotti which is also intensely chocolatey.

12 May 2013: It’s not likely any foodie will ever conceive of an Albuquerque tiramisu trail. There just aren’t that many trail worthy options save for Torinos @ Home, Joe’s Past House and the Farina family. Though it’d be a short trail, it would be a delicious one. Farina Alto’s tiramisu is an excellent rendition: Savoiardi cookies soaked in espresso with marsala zabaglione. The strong espresso is perhaps why tiramisu translates to “pick me up” in Italian. This is an adult dessert, just sweet enough for interest.

Great pizza at the Heights can now be found on the gentle up-slope leading to the Sandias. It’s a pizzeria and more whose very name beckons you to stop.