Skip to content
AlbuquerqueAsianClosed in 2012Gone But Not Forgotten 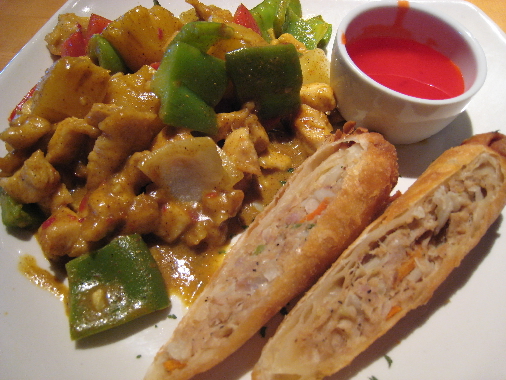 In 1520, after sailing past South America’s Tierra del Fuego and through a perilous strait which he named for himself, Portuguese explorer Ferdinand Magellan laid eyes on the expansive South Sea. At the time, the waters were calm and peaceful. He renamed it the Pacific Ocean (from the Latin Mare Pacificum which means “peaceful sea.”) Magellan vastly underestimated the Pacific, thinking he would be able to cross it in a matter of days to reach his goal, the Spice Islands.

For most of Magellan’s four month crossing, the waters of the Pacific did little to belie the name he had bestowed upon it. During that crossing, however, Magellan and his men suffered terrible hunger. They ran out of fresh food and were relegated to eating grubs and rats. Unfortunately Magellan did not have the benefit of knowledge we now possess. We now know, for example, that the Pacific covers 32 percent of the world’s total surface and that it separates the countries bordering its western and eastern rims by eight time zones and the International Date Line.

Magellan would be amazed that today, a sea crossing by the fastest ship will take a mere two week. There’s no way he could fathom the concept of air travel or comprehend that a typical air crossing between population centers in North America and a counterpart in one of the Pacific Rim’s Asian countries takes only 15 hours non-stop.  The notion of gourmet meals and sumptuous meals on board ship would be unfathomable, too.

The advent of information and technology has made the world significantly closer since the days of Magellan and fortunately, insects and rodents are no longer culinary fare during a journey across the Pacific. Dining at the Asian countries bordering the Pacific Rim is now considered a sublime culinary experience, albeit one for which great wealth is required. Since most of us can’t afford such an experience, we can be grateful for Albuquerque’s burgeoning growth over the past three decades. That growth has meant the introduction into our dining culture, of restaurants crossing many ethnic groups and demographics.

Today, it’s easy to travel throughout the city to partake of the great cuisine of Asia’s Pacific Rim nations. Restaurants abound which feature the cuisine of Vietnam, Japan, China, Thailand, Korea and more.  A handful do so under one roof.  On November 1st, 2007, a restaurant launched in Albuquerque which purports to provide the best culture and cuisine of all those great Pacific Rim nations.

That restaurant is the Pacific Rim Asian Bistro which according to its Web site, “combines the flavors of the Pacific Islands with the freshness of California cuisine…the spices of the Southwest with the exotic tastes of the orient.” That’s a pretty audacious claim, but don’t bet against this restaurant. With a founding ownership pedigree that once included Albuquerque’s first Fortune Cookie restaurant as well as the Samurai Grill and Sushi Bar, success is an expectation.

The Pacific Rim Asian Bistro is housed in a free-standing, 6500 square foot complex that was previously home for Eurasia Bistro and Sushi Bar and before that, the Minato Japanese Restaurant. While similar in concept to Eurasia, the Pacific Rim’s price point is more reasonable for Albuquerque’s per-capita. Even though it is situated near some of the city’s most expensive real estate (Tanoan and High Desert to name but two), swanky and upscale doesn’t mean residents aren’t price conscious.

Another reason to bet on Pacific Rim is the presence of adept sushi chefs who know their way around sushi knives.  The  sushi and fusion menu were designed by one of Albuquerque’s most recognized and acclaimed chefs James Oh.  Though his skilled hands no longer perform spectacular feats of prestidigitation with the knife at the Pacific Rim, the sushi remains quite good and a popular choice for diners.

The Pacific Rim is a sight to behold and experience. Walk into the restaurant’s front room and you might feel the way Magellan felt when he first set eyes on the Pacific. There’s a sense of calm and peace even in the front room. Attribute some of that to obvious feng shui principles in application. The soothing sounds of rivulets of water cascading down a rock design greet you in that front room and follow you into the restaurant where a larger waterfall design continues the soft percussion of water against stone. There is harmony and balance throughout the restaurant design. This is a beautiful restaurant!

Two ceiling panels on either side of the industrial ductwork simulate the twinkling of the night sky on an ebony canvas (although nothing can compare to the night skies in Northern New Mexico.) A unique dinner offering at the Pacific Rim are the bulgogi tables. Prime cuts of tender marinated beef are brought to your table where you can prepare it to your exacting specifications. This service is only available for two or more diners.

Even the menu portends great things in store for your meal. The appetizer section is called “Great Beginnings” which is subtitled with “a perfect way to start your meal.” Signature dishes are served with miso soup and steamed white rice. The miso soup arrives even before the appetizers. It is a very good soup with more wakame seaweed and less salt than miso soup at other Asian restaurants in the Duke City.

Chile addicted New Mexicans will enjoy the restaurant’s green chile tempura which is lightly battered and deep fried to allow the chile’s flavor to stand out. The green chile has a fresh flavor, but we could not discern the distinctive aroma of the roasting process. It is only medium on the piquancy scale, but quite good nonetheless. The green chile tempura is served with the restaurant’s signature “Tokyo sauce,” a sweet soy sauce with ginger, sugar and other seasonings. It is wholly unnecessary as great green chile needs no ameliorant.

Another excellent starter, especially if you love fleshy fungi, are the Kinoko Mushrooms, which are stir-fried wild mushrooms from Japan.  Kinoko is often used as a generic term for mushrooms, but not all mushrooms are created equally.  Pacific Rim’s kinokos are prepared with scallions and garlic and served with a whisper-thin broth as light and delicate as possible, wholly unlike a more intense porcini stock. It would make a wonderful soup.

The Pacific Rim restaurant offers both conventional pot stickers (described on the menu as homemade dumplings pan-fried) and gyoza (deep-fried pork dumplings).  Both can be ordered pan-fried and steamed or boiled.  The primary difference, for the most part, is that gyoza are Japanese pot stickers.  The Pacific Pearl’s rendition of pot stickers have a crunch crust at the bottom, but when you bite into them, they are moist and soft.  With each bite you’re rewarded with the flavor of seasoned pork.  The pot stickers are served with a chilled soy dipping sauce in dire need of desalinization.

I’ve always said that if you want to curry my favor, treat me to a curry blessed dish. When you’re ensnared by the addictive properties of great curry (particularly when it’s ameliorated by fresh coconut milk), it makes ordering anything else a challenge. Fortunately the Pacific Rim has several curry dishes and if the pineapple curry is any indication, they’re quite good. This pineapple curry balances sweet and piquant flavors with the juicy tanginess of pineapple and the pungent exoticism of a yellow Thai curry.

This curry isn’t dessert sweet as you might find it in some Thai restaurants. Because the chef went easy on the coconut milk, the yellow curry truly stands out. This dish is made with green peppers, onions, flecks of red chilis and other Thai seasonings. The pineapple curry is served with two egg rolls sliced diagonally so as to present the ingredients: shredded pork, cabbage, carrots and sundry ingredients. The egg rolls are served with a “Shanghai dipping sauce” which is an iridescent red color and is nearly cloying in its sweetness.

If ordered for one, bulgogi is prepared and served hot off a grill in the kitchen. You may lose out on the fun experience of preparing it yourself, but you’ll still enjoy the harmonious marriage of sweet, savory and spicy flavors. Thin strips of lean beef are marinated in the restaurant’s signature bulgogi sauce then stir-fried nearly to the point of caramelization with green and white onions then topped with sesame seeds. At Pacific Rim, the meat is fork tender with absolutely no sinewy or fatty pieces.

The bulgogi is served with assorted salads known as namul. These salads are comprised of pickled, spicy and hot vegetables. The pickled cucumbers and bean sprouts are quite good, but the centerpiece is the kimchi, a fiery cabbage-based staple of Korea which is heavily seasoned with garlic and chile.

The sushi menu includes the standard maki (rolls) and nigiri (fish atop rice) as well as sashimi. It also includes sections featuring baked sushi rolls and tempura sushi rolls for diners who may not want “raw fish.”  True sushi savants place themselves in the hands of an expert chef by ordering omakase, literally “chef’s choice.”  The chef will present a series of plates, beginning with light fare and graduating to rich, heavy dishes.  It’s an experience everyone should try.   Best of all, the Pacific Rim continues to serve sushi late into the evening (in Albuquerque that generally means past ten o’clock).

Aficionados of incendiary sushi rolls will find several which will make ordinary humans wish for an asbestos lined mouth.  One such tear-inducing roll is appropriately named the 911 Roll.  It’s constructed of crab, spicy tuna, jalapeño, cream cheese and spicy crab meat.  The cream cheese tempers the heat somewhat.  An even more eye-watering mouthful is the green chili (sic) special roll made with crab meat, shrimp tempura inside, spicy tuna and fried chili on top.   Both these rolls render wasabi redundant.

In the Orange Duck entree, you’ll experience what diners love and dislike most about duck.  What we love most is the unctuous deliciousness of a rich, savory meat.  What we dislike most about duck is all those annoying bones.  Yes, duck is very fatty, but when you consider the lusciousness of duck confit, it seems to help the fattiness go down easier.  It helps that the orange duck is awash in a sweet orange sauce punctuated with orange peel and its tangy zest.  Not all meats go as well with such a sweet sauce, but duck is such a flavorful fowl that the flavor pairing is a natural.

Also quite good with an orange sauce is chicken, especially when the orange sauce has piquant qualities courtesy of those potent rehydrated red peppers and a little orange zest.  The Pacific Rim’s orange chicken is beautifully plated–bite-sized pieces of chicken stacked atop thinly sliced oranges.  The chicken is mostly white meat and is moist and delicious, but the breading is just a bit thick.  Still, it’s several orders of magnitude better than the Chinese buffet quality orange chicken which is mushy and boring.

Thanks to the Pacific Rim, you no longer have to drive to different restaurants around town to get your fix of your favorite Asian delights. Most of them are available in one restaurant–the culture and cuisine of the Pacific Rim right here in Albuquerque.