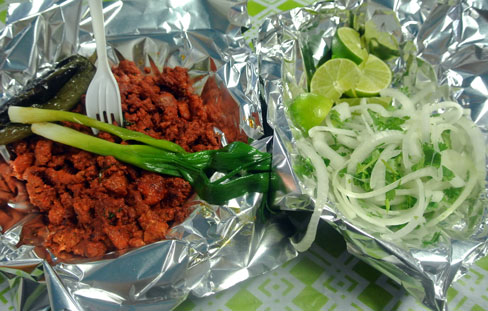 On a dark desert highway, cool wind in my hair
Warm smell of colitas rising up through the air
~Hotel California – The Eagles

Among the many alluring olfactory temptations emanating from dilapidated and timeworn food stalls and colorful restaurant storefronts throughout Mexico is the warm smell of colitas. They beckon passers-by to experience the aromas, sights, sounds and flavors of one of the Land of Montezuma’s most intriguing and unique dishes, one which will require timorous diners to renounce the heinous malefaction of consuming aartery-clogging and fatty foods. For many Americans, colitas have a major “ick” factor so they stick with the “safe” foods: tacos, tortas, tostadas and tamales (the “T” food group)…and wisely, they don’t drink the water.

To intrepid gastronomes intimate with Mexican food, “the warm smell of colitas rising up through the air” has a different meaning than the colitas about which The Eagles sang. Though often interpreted as sexual slang (colitas translates to “little tails”) or a reference to marijuana (cannabis buds), band member Don Felder once explained the colitas referenced in the song are “a plant that grows in the desert that blooms at night, and it has this kind of pungent, almost funky smell.”

The carnitas which delight diners throughout Mexico are indeed “little tails.” More precisely, they’re turkey tails (colitas de pavo), they’re a delicacy and you’ll never convince aficionados of these crunchy, fatty, meaty treats that the immortal Eagles lyrics weren’t written about them. Their first and most logical argument, of course, is the warm smell rising up through the air. It’s a smell you can find in the Duke City only at Chicharroneria Orozco just north and west of the Barelas neighborhood.

Though only a few blocks south of downtown, the area just over the bridge that crosses the Rio Grande on Bridge Boulevard may remind you of crossing into Juarez. The flesh-rending razor wire fence atop the walls and roofs of nearby businesses will certainly tell you this isn’t the kinder, gentler side of Albuquerque. Don’t let that scare you. Most of the visitors to Chicharroneria Orozco are young immigrant families jonesing (or would that be martinezing) for a taste of home.

There’s a lot to see, hear and smell when you step into the restaurant. The cynosure is most definitely an island of deliciousness–a glass case displaying fried goodness in all shapes and sizes. Save for the colitas de pavo and higado ensebollado (beef liver and onions), featured fare is of the porcine variety: tripitas (intestines), buche (stomach), carnitas, carne al pastor and costillas de puerco (pork ribs). For an insanely low price, one pound of the meat of your choice includes a stack of fresh, steaming corn tortillas and a bowl brimming with chopped cilantro, onions and limes.

On one corner of the restaurant is a celebration of the charro, the Mexican horseman of legend and lore. Atop stacked hay bales is a colorful Mexican blanket, a saddle and a lariat. The walls immediately behind the hay bale “horse” include other accoutrements of the charro. An adjacent dining room includes an automated teller machine (ATM) so you can settle your bill of fare. Take a gander at the refrigerator in which a number of Mexican and American beverages brewed in Mexico (you haven’t lived until you’ve had a Cherry Pepsi bottled in Mexico and made with pure cane sugar) are available.

As you await delivery of your meal, chips and salsa are delivered to your table. The salsa is uniquely Mexican. It’s not made with either onions or tomatoes as most New Mexican salsas tend to be. The salsa, a rich red chile punctuated with cilantro and salt will still win you over. It’s not especially piquant and it’s almost watery in its consistency, but it’s got a great flavor. Because it is so thin, the thick, crisp chips will function more efficiently if you dip them instead of trying to scoop Gil-sized portions of salsa.

If you’re averse to fried pork, the Carne Al Pastor is an excellent choice. Al pastor, which translates to “in the style of the shepherd” is a ubiquitous street food option in Mexico where al pastor means thin cuts of marinated pork whittled away from a cone of sizzling pork gyrating on a spit similar to an gyro. At the Chicharonneria Orozco, the carne al pastor arrives at your table in cubed form, a bright red reminiscent of tandoori meats in its splendorous patina.

The corn masa taco shells are about four-inches around and remain hot to the touch during your entire meal even though they’re not presented in a warmer of any sorts. A few spoonfuls of carne al pastor, some freshly chopped onions and cilantro followed by a squeeze of lime and you’ve got a taco which may transport you to the streets of Mexico. The marinated pork includes some sinewy and fatty bits, but that should be expected considering the price. You’ll have enough carne al pastor to share and still have some left over for the following day.

In Mexico, carnitas are the undisputed king of the taco cart as well as of cholesterol. Every region has its own version of deep-fried pig. Sometimes shredded like pulled pork and sometimes cubed into small pieces, carnitas should always be moist, juicy and redolent with porcine flavor. The Chicharroneria Orozco’s version of carnitas is very typical. One pound of these smoky golden-hued beauties may permanently imprint a smile on your face.

Where many couples might celebrate a wedding anniversary at an upscale eatery, my Kim and I couldn’t resist the warm smell of colitas and celebrated our momentous day at Chicharroneria Orozco. She told me we could return any time.