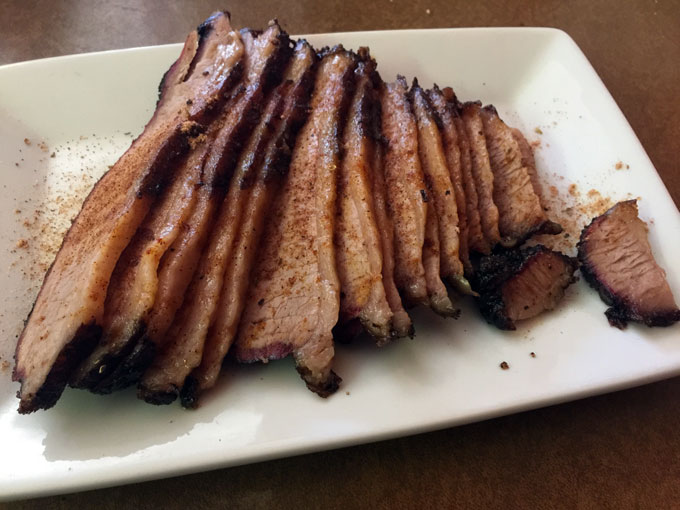 Like many Americans, Daniel “Pepper” Morgan has two passions in life–baseball and barbecue. While these two passions seem inextricably bound in American culture, what separates Daniel from so many of us is that we excel at watching baseball and eating barbecue. Daniel excelled at playing baseball, having made it to the Houston Astros Triple A farm club. His barbecue is also par excellence, big league stuff–as good as any barbecue you’ll find in the Duke City area.

Though he has a degree in Mechanical Engineering, what Daniel is most exuberant about is cooking. It’s a passion nurtured at the feet of his mother who cooked daily for more than five hundred students at the Texas State School in Denton. It’s a love engendered from being around his grandmother’s kitchen from which the tantalizing aromas emanated that impressed themselves indelibly in his memories. His grandmother, by the way, grew up in Stamps, Arkansas and called poet laureate Maya Angelu her best friend.

Settling comfortably into middle age, Daniel continues to live the baseball dream, though now it’s vicariously through his son, himself leaguer in the Miami Marlins system. Unlike in sports where the ravages of age diminish an athlete’s skills, Daniel continues to improve upon the recipes passed on by his grandmother and mother. When it comes to cooking, he’s at all-star, maybe MVP level.

Daniel’s restaurant is situated at the former digs of the Almost Gourmet Soul Food Restaurant on San Pedro just north of Central and directly across the street from the Alice K. Hoppes African American Pavilion” and one of the more bustling entrances to the New Mexico State Fairgrounds. This part of San Pedro is very heavily trafficked, but that doesn’t necessarily work to the advantage of Pepper’s Ole’ Fashion BBQ.

The restaurant sits back in a relatively inconspicuous storefront location and sometimes southbound traffic is so heavy that it completely blocks northbound traffic’s visibility to the restaurant. Coupled with an austere storefront parking, it’s not an ideal situation for a restaurant with so much promise. There are so very few parking spots in front of the restaurant that prospective diners might be turned away.

Still, promise so rich can’t help but be actualized thanks to word of mouth from daring diners undaunted by the challenges of parking or navigating through traffic–diners such as Chris Astier who first visited shortly after the restaurant’s April, 2009 launch then recommended it highly to me. Like me, Chris found ample parking just south of the strip in which the restaurant is situated. Frankly, for barbecue this good I would have parked a mile away and walked to Pepper’s.

Parked in front of the restaurant until rather recently was a portable smoker from which emanated hazy smoke plumes which wafted into your motorized conveyance like a sweet Texas smoke signal beckoning you to try St. Louis style ribs, Texas style brisket and so much more. It’s a wonder there weren’t more accidents on San Pedro caused by hungry diners rubber-necking to locate the source of the smoky siren’s call.

Daniel uses a combination of locally procured hickory, mesquite and oak woods to produce that smoky invitation he hopes will lure even more diners into his restaurant. Hickory, the most common wood used in the “low and slow” smoking process imparts a pungent, smoky, almost bacon-like flavor and is especially good for pork and ribs. Oak is slightly sweet and has a fruity smoke bouquet. It is best used with beef, pork and poultry. Fortunately, Pepper’s offers all of these.

The restaurant’s entrance leads to a tiny room with little more than a couple of tables and a counter at which you place your order. Behind the counter you’ll see Daniel hard at work preparing made-from-scratch desserts and sides made fresh daily. Step into the main dining room and it might feel a bit like a shrine to things important to Daniel: UNM sports, the Dallas Cowboys, and more. Soothing jazz and soul plays in the background.

The menu is relatively small, but its size certainly belies the breadth of flavors prepared in the kitchen and on the smoker. Your best bet is a two meat combination platter: two meats, any two veggies and a soda for one price. The meats include Southern deep-fried catfish filets, BBQ brisket, smoked sausage, St. Louis style ribs, Texas style dry-rub ribs, smothered pork chops and chicken. Sides are classic: collard greens, fried cabbage, baked beans, corn on the cob, southern potato salad, dirty rice, sweet potato cornbread, macaroni and cheese and sweet potato fries. These are the dishes which most spell s-o-u-t-h to anyone who’s lived there.

The sauce has almost equal proportions of sweet, savory, tangy and smoky qualities. It is a light, thin sauce that imparts different qualities on different meats (if you’ve ever been to a restaurant in which all the meats taste virtually the same courtesy of the sauce, you’ll understand) and it’s not slathered on as some inferior barbecue restaurants do to hide the poor quality of their smoking process or meat. At Pepper’s, the meats are allowed to shine with the sauce a complementary additive. For example, on the brisket, the sauce seems sweeter than on other meats. The brisket is sliced thickly and is tender with an enticing aromatic hint of smoke.

When a restaurant serves barbecue chicken that retains any semblance of moistness and tenderness, you know the smoke master has grasped the nuances of preparing this most confoundingly difficult meat to smoke well. A bird that isn’t dry and leathery is a challenge for any pit master. It’s a challenge Daniel has surmounted. Peel back the slightly crisp skin and imbibe the flavor sensation of tender, moist and delicious chicken with that invigorating smokiness at which he’s so adept.

Having lived in Mississippi for eight years has meant eight years of withdrawal from delicious, deep-fried Southern catfish. Mississippi, which seems to vie with New Mexico for 50th place in seemingly every category of notoriety, leads the nation in the aquaculture production of catfish. The Magnolia State’s restaurants, unlike those in the Land of Enchantment, also know how to prepare it. Our experience with catfish in New Mexico’s restaurants is that much of it tastes as if it’s been coated in sawdust or fried to a wrinkly, desiccated mess. The cornmeal coated catfish at Pepper’s actually reminded us of the catfish in Mississippi. It is light, delicate and flaky.

The St. Louis style ribs are meaty and smoky with the sauce caramelization which typifies St. Louis style barbecue. The ribs not only have a more liberal application of sauce, that sauce is almost lacquered on the ribs, a result of saucing and re-saucing them on the grill repeatedly. Daniel spends hours “mopping and basting” meats with sauce in the smoke. While redolent with smokiness, the smoke isn’t overpowering, lending its presence without detracting from the native flavors of the meats.

The smoked sausage is light on spices, but heavy on flavor. Bite into a diagonally sliced piece and it snaps, juicy deliciousness springing forth from the pinkish meat. The sauce has little influence on the sausage, a good thing considering the flavor concentration in the smoky, luscious links. If your experience with smoked sausage is that no matter how “mild,” it engenders heartburn, try the links at Pepper’s.

The sides are worth a visit to Pepper’s all by themselves. The dirty rice is exceptional, the best we’ve had outside Louisiana. It is moist and redolent with the flavor of garlic, green onions, cayenne, paprika and other ingredients. The macaroni and cheese is creamy and deeply cheesy, several hundred orders of magnitude better than any you’ll find out of the box. It’s an adult macaroni and cheese even children will love.

As for desserts, they’re all made from scratch daily. The sweet potato pie is the best we’ve had outside of Mississippi with a cinnamon and nutmeg sweetness in every bite. Only my friend George Greenway in Biloxi makes sweet potato comparable to this one. The banana pudding is also phenomenal: ripe bananas, a homemade custard and vanilla wafers moistened by the pudding. Blueberry cobbler is is sweet, with just enough of a crunchy biscuit topping. The pecan pie is as good as you’ll find in the Deep South. How can you beat that.

While Daniel may be from Texas, his barbecue defies stereotypes. Some visitors will swear it’s Memphis style, others will swear its genesis is Kansas City. Most, however, agree on one point–this is darned good barbecue.