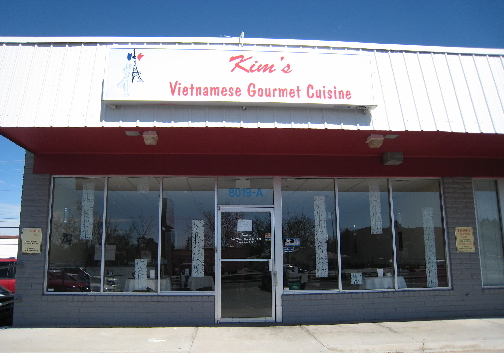 During a memorable 1974 episode of MASH, it was Hawkeye Pierce’s turn at being physician of the day. Throughout the day he treated local indigenous personnel, all of whom identified themselves as “Kim Luck” when they reported in.

Eventually Hawkeye turns to Radar O’Reilly and says “Kim Luck? This is the fifth one today.” He then asks the local, “Can you identify yourself?” Patting his chest and smiling broadly, the local responds “This is me!”. Hawkeye’s retort: “This must be my Kim Lucky day.”

Albuquerque’s Kim Lucky day came on September 22nd, 2006 with the launch of Kim’s Vietnamese Gourmet Cuisine, named for sisters both named Kim. In this case, Kim is a diminutive of Kimhang and Kimha.

The sisters emigrated to Albuquerque from the commune of Nancy, France in 1998 and brought their mother over in 2003. The family triumvirate’s restaurant has a decidedly more French influence than other Vietnamese restaurants in the city while retaining the unique charms and delicious specialties of their ancestral homeland.

Kim’s Vietnamese Gourmet Cuisine is situated on the same strip mall in which the outstanding sandwich shop Relish is ensconced. Though one of the smallest Vietnamese restaurants in Albuquerque, it is quickly establishing a following. We were the first to arrive during our inaugural visit but by the time we left an hour later every one of the dozen or so tables was taken.

The ambiance includes a bit of whimsy and not a lot of color, but what color there is will catch your eye. A wallpaper border depicting mustachioed, cherubic chefs separates the walls which atop are colored a creamy yellow and at bottom, an almost shockingly bright cranberry. Framed signage points to Parisian landmarks such as the Arc de Triomphe. An altar to Buddha, complete with incense, candles and an offering of plump red grapes sits on the floor by a rear wall.

It’s not only the ambience that has a striking blend of French and Vietnamese cultural influences; the menu includes several items that seem to be a fusion of cuisines from both nations. A pastry case under glass is most assuredly European with French fruit tarts and baked flan. It’s almost a surprise not to see gateaus, those wonderful French cakes that rely on the native properties of ingredients rather than sugar for flavor.

One of the restaurant’s popular appetizers is a white asparagus and crab soup to which Kimhang encourages patrons to add a few droplets of a red vinegar to accentuate the flavor of the crab. The broth, not quite as thick as a congee, is served piping hot and goes down smoothly. It’s the type of comforting soup that’s especially good on a cold winter day, but is delicious any time.

An order of coconut-braised chicken is rewarded with two pieces of perfectly prepared poultry–a thigh and a leg, both braised in a coconut juice (probably young coconut because it lacks the cloying flavor of some Thai coconut enriched curries). The chicken is fall-off-the-bone tender and absolutely delicious, albeit not very filling. Luckily this entree also includes white rice, cold pickled vegetables and a side bowl of the coconut au jus (good enough to be served as an entree itself).

If you’re tired of rich, cloying desserts, Kim’s baked flan might be just what you’re looking for. Unlike some Mexican and New Mexican flans, this one isn’t overly sweet and the portion size is probably twice what you’d get at other restaurants. This flan is meant to be shared.

Make your own Kim Luck and head over to yet another wonderful Vietnamese restaurant. You’ll thank your Kim Lucky stars you did.