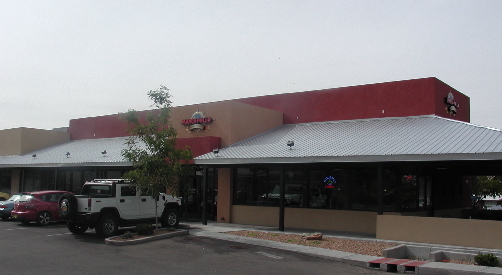 While eating a store-bought rotisserie chicken is somewhat more appealing than than consuming the very last one of Quickie Mart’s perpetually rotating, alutaceous (seared to a leathery sheen under a heat lamp inferno) hot dogs, the prospect of a desiccated rotisserie chicken carcass for dinner is hardly tempting. Experience has taught us that while slightly less leathery, restaurant rotisserie chicken would be a challenge for the most advanced desalination technologies. That’s what we expected during our inaugural visit to Marco Pollo Charbroiled Chicken.

Were we ever in for a pleasant surprise! As it turns out, Marco Pollo serves some of the best char-broiled chicken we’ve had in a long time. Best of all, Marco Pollo is the first instantiation of a local restaurant chain with the gloss and grandiosity of a national franchise. It is not related to a similarly named chain enterprise out of Texas.

Marco Pollo Charbroiled Chicken is the brainchild of Mark Harden, a plucky local entrepreneur who managed New Mexico’s Kentucky Fried Chicken franchises in the ’80s and later ran the now defunct (in New Mexico at least) Pollo Asado. Harden created the recipes, marinades and concept for a restaurant venture he hopes to expand further. The concept includes a red and yellow plumed mascot who very closely resembles the famous San Diego Chicken.

Under plexiglass in each of the restaurant’s circular tables is a map of the world with clever cartoon illustrations of local interest events, fauna, flora and personalities. A child with an imagination (even a 48-year old child like me) could get lost for hours circumnavigating the globe and interacting with all the wonder depicted on each table.

Marco Pollo’s menu is replete with poultry a plenty–not only the charbroiled chicken in which the restaurant specializes, but chicken wings, chicken burritos, chicken tacos, chicken enchiladas, chicken nachos and more. The chicken is marinated in a garlic, fruit and spice mix developed by Harden then is grilled over an open flame. Charbroiled chicken is available in quarter, half or whole sizes. You’ll want to have some left over for dinner so order the 12-piece chicken which includes three large side items and tortillas.

Unlike its store-bought brethren, Marco Pollo’s charbroiled chicken is moist, tender and delicious. The garlic, fruit and spice mix (while perhaps just a bit too salty) permeates throughout the chicken, not just the skin. Despite being truly finger-licking good, this is a multi-napkin chicken.

Except for the Lara Flynn Boyle thin tortillas, the sides were excellent. The Fiesta coleslaw is made with a sweet salad dressing and is crunchy and crisp. The rice was perfectly cooked with just a hint of spice. The best side, however, was the sweet corn and zucchini (calabasitas) which melded sweet yellow corn and fresh zucchini in a marriage of sweet and savory contrasts.

The restaurant’s salsa bar features a pico de gallo salsa with mushy tomatoes, a house salsa with little bite and an avocado salsa which lacked salt but was better than the other two. You’re free to abscond to your table with as many chips as you can carry.

A separate part of the capacious restaurant is dedicated Galileo’s Galley which serves frozen custard and Italian ices. Italian ice flavors are rotated daily, but the soft-serve frozen custard is available in chocolate and vanilla every day. If you can’t make up your mind which to have, ask for an Italian parfait in which vanilla custard is layered with the flavor of the day Italian ice. We’ve lucked out during our visits and have had both lemon and watermelon flavored Italian ices that complement the velvety smooth and creamy (and dreamy) ice cream wonderfully.

All adventurous culinary explorers should navigate to Marco Pollo soon!