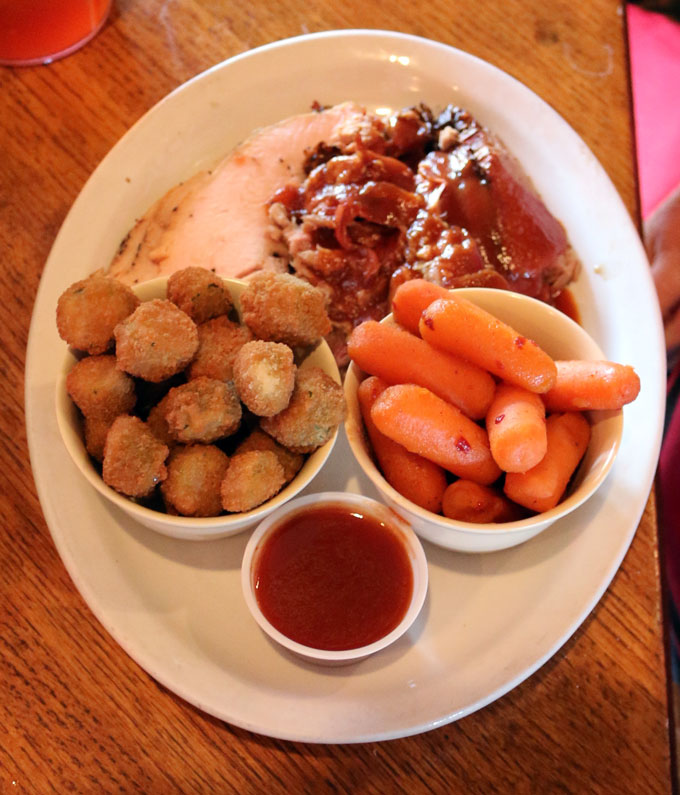 If you believe alcohol Prohibition, America’s federally mandated fourteen year social experiment with sobriety, ended with the passing of the 21st amendment in 1933, you would be wrong. As of January, 2016, there were still about 200 “dry” counties (particularly in the Bible Belt) across the fruited plain with what most would consider excessively stringent liquor laws. Residents of dry counties who want to indulge in their favorite adult beverage have but to drive to the county line of the nearest “wet” county where package stores and bars do a thriving business in alcohol sales.

The County Line Restaurant was founded in 1975 in an old Austin, Texas speakeasy (a term coined during Prohibition that describes bars or nightclubs who dispensed alcohol illegally). Today the County Line serves its award-winning barbecue in several Austin locations as well as in San Antonio and El Paso. Albuquerque’s County Line (launched in 1980) is the furthest outpost from the original restaurant and the only one outside the great state of Texas. Fortunately County Line aficionados across the fruited plain can obtain its legendary barbecue through the restaurant’s “Air Ribs” service which ships barbecue right to your door.

Four principles define the County Line’s operational model: First: offer the highest quality smoked barbecue – ribs, brisket, sausage and chicken – with traditional sides of cole slaw, potato salad and beans. Second: provide these BBQ specialties in generous portions at reasonable prices. Next: offer friendly table service with linens and bar service. Finally: feature an authentic location that celebrates the heritage of Texas. In 1975, the Texas State Legislature passed a resolution to recognize the County Line barbecue restaurant on “the occasion of its 30th anniversary of serving legendary barbecue to the state of Texas.”

While virtually no one will dispute the superiority of Texas barbecue over New Mexico barbecue (though the Land of Enchantment’s barbecue is making endroads), Albuquerque’s County Line restaurant has something none of its Texas siblings have. That’s a nearly unobstructed view of the spectacular Sandia Mountains which form a dramatic backdrop for the restaurant. You’ll have to sit in the patio to enjoy that view, but because of the mountain’s proximity you’ll certainly appreciate how it acquired its name. From inside the restaurant’s main dining rooms, the best views are panoramas of the city’s multi-hued summer sunsets and city lights the rest of the year.

The County Line’s ambience is stereotypical roadhouse with distressed wood appointments and legacy bric-a-brac strewn throughout. The cover of the menu is patterned after the “Big Chief” writing notebooks of my youth, complete with a stern countenanced Native American in full headdress (funny how the PC police haven’t gone on the warpath about that). It goes without saying that the menu is dominated by barbecue and smoked entrees, but you can also have any one of six third-pound Angus beef burgers and such Texas staples as chicken fried steak and chicken fried chicken.

Three all-you-can-eat (AYCE) family style options are available only if the entire party on a table opts for one of the three AYCE choices: the “Country Style Meal,” “The Cadillac” and the “All You Can Stand.” All three options provide prodigious platters of barbecue meats bathed in a tangy sauce and are served family-style with the main differences being cost and entrees provided in each. The “Cadillac,” for example includes beef ribs, pork ribs, sausage, chicken and brisket for just under $30 a person. The Cadillac is served with three sides: potato salad, coleslaw and beans as well as the County Line’s signature loaf of bread (white or wheat).

For the non-gurgitators (competitive eaters) among us, smaller plates are available as are other sides. Somewhat smaller than the AYCE options are the combo platters available with two, three or five meats served with your choice of two sides and the County Line’s complimentary bread. If you want the restaurant’s “Famous Homemade Bread” it’s an extra charge, but worth the dough. Among the sides, both the coleslaw and the potato salad are more tangy than sweet. Neither is particularly creamy, but they’re good alternatives to their runny, cloying counterparts served at some restaurants. The mushroom caps and corn-on-the-cob (in season) are excellent alternatives. Even better (though not always on the menu) are ancho-maple glazed carrots with their sweet-piquant flavor profile. You also won’t find better okra anywhere in Albuquerque than at the County Line.

The combo platters are an excellent option for those of us who like variety and don’t mind waddling out of the restaurant. It stands to reason that one of the meats should be the marbled 2nd cut beef brisket. Brisket is practically a religion in Texas and rightfully so. The County Line’s brisket is among the best in the city, on par with the brisket at Powdrell’s. The second (or the deckle) cut of brisket is the antithesis of any stringy, dry and chewy brisket you’ve ever had. It’s juicy, succulent and pulls apart easily. Moreover, it’s as flavorful as short ribs, but far less expensive. Peppered turkey breast has been my favorite barbecued meat since the great Gary West of Rio Rancho’s Smokehouse introduced me to it. The County Line’s version is terrific.

My friend Bruce “Sr Plata” Silver is an aficionado of beef ribs. At the County Line, beef ribs are Flintstonian in size and as meaty as ribs can be. Baby back ribs, available in half- or full-rack sizes are also excellent. A sweet and tangy sauce is lacquered on with the excess sauce lingering on the plate should you desire wetter ribs. These ribs are nearly “fall-off-the-bone” tender with just a little pull that denotes a perfect degree of doneness. Smoke permeates each morsel. If you’re unable to finish your platter, fret not because they heat up nicely the next day and are just as delicious cold.

Dessert options abound at the County Line. Regardless of which post-prandial sweet you enjoy, ask for a side of the housemade ice cream. It’s some of the very best in the city. Echo that sentiment for the peach cobbler ala mode topped with vanilla bean ice cream. There’s just something special about the textural contrast of savory, flaky pie crust and sweet, tangy peaches. Save for with a scoop or two of the vanilla bean ice cream, you can’t top this cobbler.

For more than a quarter-century, barbecue aficionados have made their way to the County Line Restaurant for a smoky taste of Texas with the magnificent panoramic views available only in the Duke City.