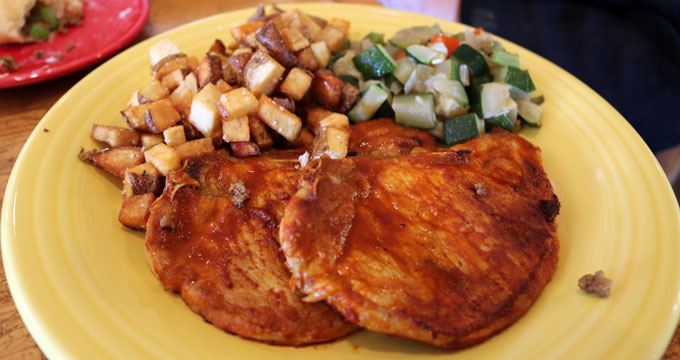 The siren song of a small town living has always appealed to Irma Rodriguez who just can’t see herself in the big city. Having grown up in Gallup, New Mexico, she appreciates the sense of community–the extended family feeling of really getting to know her neighbors. It’s an attitude she imparts to guests at Casa Diaz Mexican and American Grill, the Bernalillo restaurant she and husband Jesus launched in August, 2016. For her, the term “locally owned and operated” is deeply rooted, a reflection of her upbringing in and around family owned and operated restaurants in Gallup.

Irma’s grandmother served for decades as the tortillera at the legendary Jerry’s Cafe in Gallup. Later when Irma herself worked at Jerry’s, she assimilated the day-to-day nuances of running the most popular independent restaurant in the Heart of Navajo Country. In particular, she observed as the restaurant’s staff inculcated a customer-oriented attitude. The lessons she learned are inscribed in her restaurant’s operational model on the Web site’s “About Us” page: “We strive to give you a fresh meal that’s similar to being home cooked. When you are at Casa Diaz we treat you like family because that’s what you are to us. We want to give you the best experience and provide the highest quality of service.” Treat you like family, best experience, highest quality of service…those are small town values you’ll find at Casa Diaz.

If you’ve ever been to Jerry’s Cafe, you’ve not only experienced great service, but some of the very best New Mexican cuisine in the Land of Enchantment. Irma admits that when she’s stuck for a recipe or a dish is missing a little something, she’ll call her friends at Jerry’s and they help her out. Having a strong service foundation and a little help from Jerry’s–that’s a good formula for keeping her guests happy. It also helps that Casa Diaz has an inviting and homey look and feel. Seating, on chairs imprinted with the sunburst symbol, is comfortable. A kiva fireplace lends warmth even when it’s not in use. Walls are festooned with artwork courtesy of the Rio Rancho Art Association.

Casa Diaz is located on heavily trafficked Camino Del Pueblo in a space previously occupied by long-time Bernalillo favorite La Casita Cafe. When La Casita shuttered its doors in 2013 after more than thirty years of feeding Bernalillo, it left a significant void. Bellies still rumble when former patrons drove by the empty location. As with Casa Diaz, La Casita was a family-owned and operated restaurant which treated its guests like family. That’s just how things are in small towns such as Bernalillo. That’s why Casa Diaz is already becoming a local favorite.

The concept of a Mexican and American grill is an interesting and ambitious undertaking, but if our inaugural visit is any indication, Irma and her culinary crew are up to the task. As is our practice, we asked whether or not the chile is prepared with cumin. Interestingly the green chile is made with cumin as is the fire-roasted tomato salsa, but the red chile is not (usually it’s the other way around). Neither is the terrific tomatillo salsa (more on that later). No matter what you order, make sure to wash it down with either the horchata or the Jamaica agua fresca.

Mexican and American dishes are not always the mix-and-match dichotomy they’re painted to be, especially when grilled. They actually go very well together. The breakfast menu includes a number of Mexican and New Mexican favorites such as huevos rancheros and breakfast burritos, but it’s also got French toast, pancakes (with bananas or strawberries) and a ham-and-egg breakfast sandwich. While the menu may tell you breakfast is served only until 11AM, if you use the “my watch stopped” excuse and ask nicely, the ever-accommodating wait staff might let you order a breakfast entree even at 1:30PM.

Casa Diaz doesn’t offer distinctive lunch and dinner menus which means you can have any of the twelve starters any time after 11AM. The starters menu offers quite a bit of diversity: coctel de camaron and queso con carne as well as fried pickles and buffalo wings. Soups and salads are available as well as menudo (Saturday and Sunday only). Four burgers will tempt the burgerphiles among us. Entrees range from ribeye and salmon to enchiladas and shrimp fajitas. Kids meals include cheese pizza and grilled cheese. There’s bound to be something for everyone, including vegetarians.

There are several breakfast items you’ll certainly want to try. One of those is eggs and nopalitos, two eggs scrambled with nopalitos, tomatoes and onions, served side of Casa potatoes and charro beans with two corn tortillas. Don’t let the fact that nopalitos are the edible young pads of the prickly pear cactus dissuade you from enjoying a truly tasty dish. Yesa, the pesky, prickly cactus spines are removed and no, nopalitos don’t taste like chicken. Nopalitos have a distinctive herbaceous-sour flavor and a better flavor than so many other “vegetables.” The accompanying charro beans are magnificent, among the best we’ve ever had. Perfectly prepared pintos with pieces of hot dog and bacon, those charros are championship caliber.

If you still think a torta is just some sort of cake, you haven’t spent much time in Mexican restaurants throughout the Duke City where tortas are making significant inroads. Instead of ordering tacos which are far less substantial and quite a bit more expensive for what you get, savvy diners are ordering tortas, the quintessential, generously endowed Mexican sandwich. Sometimes called “lonche” because they’re often eaten for lunch, tortas are good any time of day. Anyone who loves sandwiches will love tortas. Casa Diaz’ rendition is served on sourdough bread with lettuce, tomato, avocado, pepperjack cheese, roasted jalapeno on the side and your choice of protein. The ham, a thick, smoky slice is especially good.

When New Mexicans hear the term “adovada” we tend to think tender chunks of New Mexico pork braised in wondrous New Mexico red chile. Indeed, throughout the Land of Enchantment, when you see carne adovada on the menu, that’s almost invariably how you’re going to get it. There are exceptions (Orlando’s in Taos comes to mind), but they’re few and far between. Add Casa Diaz to the proud few restaurants for whim the term “adovada” doesn’t always subscribe to expectations. As at Orlando’s, adovada at Casa Diaz means grilled, quarter-inch thick marinated pork chops marinated in chile. The adovada pork chops are better than the waifishly thin breakfast pork chops area restaurants tend to serve courtesy of a red chile which, not especially piquant, has a nice flavor. The adovada pork chops are served with calabasitas and papitas.

There was only one item on the menu we didn’t enjoy, the cherry cobbler. After going two-for-two with outstanding cobbler dishes at The County Line Restaurant and Eclectic Urban Pizzeria and Tap House, we thought a trifecta might be possible. Twas not meant to be. We managed to locate only one cherry in the cobbler, a gelatinous pectin-packed mess topped by a very good crust and a generous scoop of vanilla ice cream. Since the theme of this review seems to be small town, we can only hope there are cherry trees in Bernalillo. Casa Diaz is too good a restaurant to serve cherries from a can.