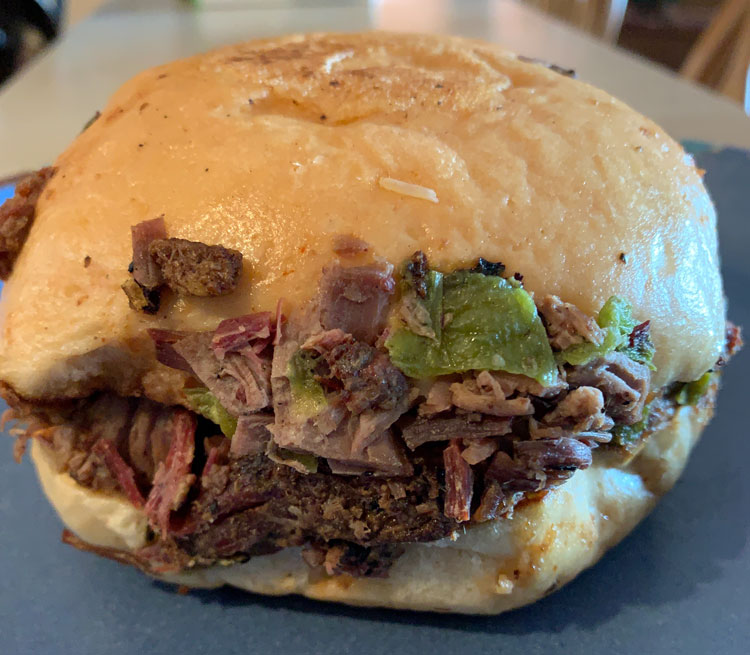 Whether it’s movies, Uber drivers or restaurants, human beings seem to predisposed to take stock in rankings and ratings.  Be it a one- to four-star rating method or any other numerical or graphical rating system, many of us won’t even read what a reviewer has to say.  We go straight to the rating.  Of course, for visitors to Gil’s Thrilling (And Filling) Blog, that means you’re missing out on thrilling vocabulary and verbosity.  Then again, maybe you don’t want to wade through my sesquipedalian rants to find my rating.

Most reviewers, me included, would just as soon not issue ratings at all.  We would prefer to have readers discern their own impressions based on our magniloquent prose and more importantly, their own observations.  As The Dude, our debonair dachshund, and I walked around the alpine town of Cloudcroft, New Mexico while my Kim waited in line at Mad Jack’s Mountaintop Barbecue, it dawned on me that maybe ratings should be based on how long a diner is willing to wait in line for a meal.  My own threshold, perhaps indicative of my lack of patience, has always been about fifteen minutes.  Any longer than that and I want to bolt for a restaurant at which there is no wait to be seated and served.

It was 51 degrees, there was snow and mud on the ground, and winds were blowing at about 18 miles per hour on the day of our inaugural visit to Mad Jack’s.  Since we had driven several hours just to dine at this acclaimed bastion of bodacious barbecue, we weren’t about to be turned away because of a line.  Besides, how long could it possibly take?  Well, just the outdoors portion of Kim’s wait in line took an hour and a half.  Once she got her foot inside the restaurant, she was part of a winding, serpentine queue for another 45 minutes before placing her order.  By then, Mad Jack’s had run out of the Flintnstonian-sized beef ribs your friendly neighborhood blogger loves most.  In fact, it had run out of several other items.

Sure, The Dude and I could have waited in he car, but if my Kim was going to be out in the elements, so were we.  Though we got to the restaurant five minutes before opening time (11AM), there was already a queue at least 50 deep.  Obviously savvy pilgrims knew that in order to enjoy their smoked meats of choice, they had to arrive early.  Mad Jack’s is open only Thursday through Sunday from 11AM to 3PM or until all the meats are sold out.  On most days, especially on weekends, everything is sold out long before 3PM so you’d better get here early.  Thankfully, unlike her more reserved husband, Kim makes friends easily and was soon the center of attention among others in the queue.  It was old-home week for her as several of them were active duty and retired Air Force veterans with whom she could swap “war stories.”

What would inspire pilgrimages to Cloudcroft, New Mexico from throughout the Land of Enchantment and beyond?  For one thing, Mad Jack’s was given a hearty endorsement from New Mexico’s own scintillating four-time James Beard award-winning author Cheryl Jamison, a preeminent practitioner of low-and-slow arts herself.   In her article for New Mexico Magazine extolling the 10 best barbecue restaurants in New Mexico, Cheryl advised “anyone truly serious about barbecue should hightail it down to Cloudcroft, high in the ponderosa pines of the Lincoln National Forest” where “James Jackson (the namesake Jack) and his cheerful staff dispense world-class brisket, beef ribs, sausage, and a killer green-chile-laced beef sandwich called Chile the Kid.”

If you’re cynically inclined to believe that’s just home state pride talking or that it can’t be that difficult to make a top ten barbecue restaurant list considering the supposed dearth of great barbecue in New Mexico, it may change your tune to hear that Mad Jack’s was also featured in Texas Monthly.  A very favorable feature entitled “Mad Jack’s Mountaintop Barbecue Offers Texas-Style Brisket in New Mexico” was written by Texas Monthly‘s Daniel Vaughn, maybe the only “barbecue editor” in the universe.   Let the significance of that sink in.  Texas Monthly’s sage barbecue guru singled out for high praise, a barbecue restaurant not within the sacred borders of the Lone Star State.  That doesn’t happen very often!

It probably did help that Jackson was born and raised in Lockhart, Texas, the official (House Resolution #1024) barbecue capital of Texas.  Not even Hatch, New Mexico can claim a similar distinction for its chile–at least not officially.  Lockhart is home to four of the most famous barbecue restaurants across the fruited plain: Black’s BBQ (the very best I’ve ever had), Kreuz Market, Smitty’s Market and Chisholm Trail Barbecue, all of which have been on Texas Monthly’s prestigious pantheon of the very best barbecue joints in Texas.  For a while, it appeared a fifth barbecue restaurant, albeit one based on a mobile food kitchen (that’s food truck to you, Bob) would give Lockhart a quintumvirate of outstanding barbecue.

in 2012, Jackson bought a barbecue trailer he parked next to a gas station along highway 183 in Lockhart.  The sobriquet “Mad Jack’s” was a natural considering you’d have to be crazy to try to compete with four long-established and recognized barbecue restaurants.  Mad Jack’s barbecue trailer was emblazoned with the tagline “the best BBQ in Lockhart east of 183” in that the fabulous four were all west of the highway.  It was Lockhart’s loss and New Mexico’s gain that the city imposed unreasonable regulations that made it difficult for any food truck to survive.  It gave Jackson the impetus to relocate to the Land of Enchantment where his family had vacationed.

Mad Jack’s Mountaintop Barbecue launched in 2015 and was immediately heralded as something special, a barbecue establishment as good as the most celebrated sultans of smoke in Texas.  Jackson returns home every few weeks for the post oak woods that imbue his meats with the mild smokiness that defines Texas barbecue.  He also picks up sausage from Kreuz Market, where much lionized pitmaster Roy Perez plies his craft.  Perez and an even more celebrated barbecue godling Aaron Franklin actually imparted invaluable advise to Jackson when he was but a fledgling in the barbecue arena.  He’s learned very well.

Because The Dude and I were busy exploring Cloudcroft, neither of us got to meet “Mad Jack,” the acclaimed pitmaster, but my Kim did.  She described him as a “really cool fifty-something Napoleon Dynamite.”    In between slicing brisket and sausage, Mad Jack was beating a melodic percussion with the cleaver and chatting up a storm with eager patrons.  Kim noted that the enthusiastic twang in his Texas drawl wasn’t unique in the restaurant.  There were several Texans in line, all enthusiastic and savvy barbecue aficionados.  Mad Jack credited “lots of love” with the magic that permeates his meats and draws huge crowds to his restaurant.  He told her someone babysits the smoker all night long, keeping it burning at the sweet spot low temperature that makes great barbecue.

Mad Jack’s ordering system is quite simple.  You can order by the slice or by the weight, as little or as much as you want (here’s betting the “much” will win out).  Brisket is available chopped or sliced (my preference).  Also available are turkey, pork ribs, pulled pork and “dino” Angus beef ribs, some of which top the scales at three pounds.  Sausage–original or jalapeño/cheese–is available by the ring.  The menu also includes seven sandwiches served with onions and pickles (a Texas tradition) on request.  Green chile stew and loaded baked potatoes head up the “extras” section of the menu.  And, of course, it wouldn’t be Texas barbecue without a passel of sides such as cole slaw, mac and cheese, potato salad and pinto beans.

My Kim, who’s not quite the traditionalist I am about Texas barbecue, eschewed sausage and other beef-based-barbecue for a loaded baked potato (baked tater with butter, cheese, sour cream and pulled pork).  As loaded baked potatoes go, this was a very good one, but for me, not one worth passing up Kreuz sausage.  About the size of a Nerf football, it’s as loaded as described, but you’re still likely to find yourself plucking out the pulled pork then focusing on the more typical baked potato fixings.

If there’s a case to be made for me standing in line instead of my bride, it’s that I would have ordered (and eaten) about a hundred pounds of brisket instead of a measly half-pound.  As is the case throughout most of Central Texas, the only seasonings used on the brisket are salt and pepper.  That’s all this exemplar of moist, juicy, tender deliciousness needs.  There are three distinguishing characteristics that make Mad Jack’s brisket the very best we’ve had across the Land of Enchantment.  One is the pronounced smoke ring, a pink discoloration about a quarter-inch thick just below the surface crust (known as the “bark”).  Second is that bark, the deep dark, crusty, sweet rind with its own flavor complexity.  Third is the “pull” that tells you the brisket is perfectly prepared.  Simply grab the brisket from each edge and pull it.  If you see a spiderweb pattern, it’s smoked to its optimum tenderness.

It’s not often pork ribs should be considered a Miss Congeniality or a bridesmaid or a second-place finisher, but that’ll always be the case when beef ribs are also on the menu.  Beef ribs reign supreme!  They’re like having a brisket steak on a bone, especially when they earn a sobriquet such as “dino.”  Pork ribs don’t have quite as much meat on the bone as do beef ribs, but they’re oh-so-wonderful on their own right.  Mad Jack’s pork ribs are akin to pork candy, infused with the salt and pepper rub that renders them savory with sweet notes sneaking in.  A prominent smoke ring is evident on each rib, denoting a perfect cooking.  These ribs are moist and delicious with just a bit of tug that tells you they’re not overdone.

It’s not solely about Texas barbecue at Mad Jack’s.  In addition to green chile stew, the menu features a sandwich showcasing the Land of Enchantment’s official state vegetable–green chile.  Even its name bespeaks of New Mexico’s favorite condiment, meal, snack and passion.  That would be the “Chile The Kid,” an incomparable finely chopped brisket sandwich with Hatch green chile.  Quite simply this is the very best brisket sandwich we’ve ever had, one of the best sandwiches of any type.  It’s a magnificent celebration of two elements that bring out the very best in one another.  Even sans sauce, it’s as moist as you’d ever want any sandwich.

Was Mad Jack’s Moutaintop Barbecue worth a wait of more than two hours?  It most certainly was though for future visits, we’ll get there early enough to shorten that wait substantially and to ensure we snare some of those cherished beef ribs.  Mad Jack’s is certainly one of, if not THE very best barbecue restaurant in New Mexico.  It’s so good it could be in Lockhart, Texas and we’re certainly happy it’s not.