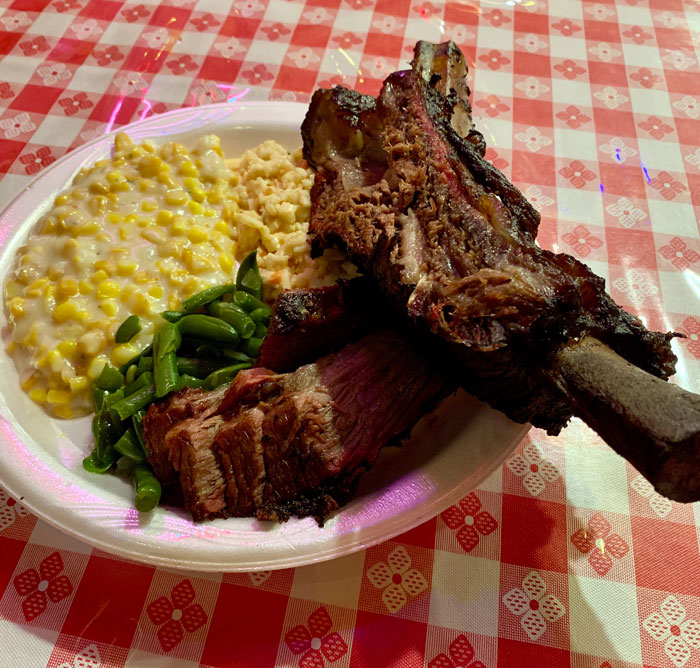 Yabba-dabba-doo!  After finishing another day of toiling at the quarry, Fred Flintsone rushes home to pick up his modern stone-age family for a drive-in movie, an exclusive one-night only viewing of The Monster.  Courtesy of Fred’s two feet, the family then proceeds to Bronto Burgers & Ribs Drive-In for an order of ribs.  Somehow a slim waitress manages to heft the behemoth ribs over to Fred’s car, but when she deposits them onto the carhop window service tray, the vehicle and all its occupants tip over.  Until our visit to Black’s Barbecue in Lockhart, Texas, we believed ribs that big were to be found solely in animated television cartoons. Now we know better!

If the mention of Lockhart, Texas triggered involuntary salivation and an acute longing for smoked meats, you’re an inveterate barbecue aficionado.  Lockhart is a meat lover’s mecca, a town so synonymous with barbecue that it was officially proclaimed “The Barbecue Capital of Texas” (Resolution No. 1024) by the Texas state legislature.   Generations of barbecue lovers don’t just visit Lockhart.  They make pilgrimages to Lockhart–purposeful, inspired, meat-seeking missions to the town of some 15,000 souls that four of the most famous purveyors of low and slow smoked meats under spacious skies call home.

To understand the significance of the distinction “Barbecue Capital of Texas” is, you’ve got to understand that barbecue is to the Lone Star State what red and green chile are to New Mexico…maybe even more.  Texans don’t just love their barbecue, they have an extraordinarily high opinion of their smoked meats.  No one celebrates barbecue as much or as well as Texas Monthly which “every four or five or six years, depending on how hungry we are, embarks on a special public service: compiling a list of the fifty best barbecue joints in Texas.”  They crisscross the state, logging thousands of miles to investigate the offerings of institutions large and small.  In 2013, Texas Monthly arrived at the conclusion that “Texas barbecue has no peer on Earth.”  Its fifty best list, entitled “The 50 Best BBQ Joints…in the World!” was compiled without having to leave the state’s borders.  Lockhart featured prominently in that canonical list.

Lockhart lies some 32 miles southeast of Austin though you can get there in less than a half hour if you push the 85mph speed limit permitted on much of TX-130.  We joined a cavalcade of cars and troupe of trucks all seemingly drawn preternaturally to the bastion of barbecue.  Once in Lockhart, some split off and headed to Kreuz Market.  Others veered toward Smitty’s.  Still others turned off toward Chisholm Trail Barbecue, the upstart (1978) among the quadrumvirate.  For us, Black’s Barbecue beckoned best. According to the City of Lockhart website, the four barbecue restaurants–all about a half-mile of one another–bring in about a quarter-million visitors a year.  About half that number must have visited on the same day we did.

Black’s Barbecue is the elder statesman among Lockhart’s fantastic four (salute to Stan Lee), having launched in 1932 during the height of the Great Depression.  Heralded as the oldest barbecue restaurant run by one family in Texas, Black’s was originally founded as a grocery and meat market.   Barbecue actually started as a sideline, a way to use leftover meats.   It wasn’t until 1982 that the family finally gave up its grocery business to focus solely on barbecue. Since then, Black’s has had a perennial presence on Texas Monthly’s fifty best.  For that matter, so have Lockhart’s other barbecue legends.

As you approach Black’s, seductive plumes emanating from well-seasoned brick pits waft toward your nostrils like an irresistible Texas smoke signal beckoning you forward, an aphrodisiac no carnivore can resist.  It’s almost anticlimactic to step into the restaurant and be siphoned through a narrow passage way, gleaming trays of tempting sides forestalling the real reason for your visit.  Hasten past them, your tray brimming with delicious side dishes, and you’ll be treated to a dazzling display of meat-cutting legerdemain.  Well-practiced cutters slice glossy slabs of brisket, Flintstonian ribs and burnished sausage links to order.  Fifty-year-old wooden chopping blocks are well-scarred from the percussion of slicing and chopping.

Because, well, this is Texas, pulled pork has no place on the menu though Black’s does offer smoked half-pound pork chops.  Even the signature sausage is ninety-percent beef.  A Texas barbecue experience is all about beef and because “everything is bigger in Texas,” we’re talking behemoth beef short ribs, the type of which would tip over some cars.  Each bone is nine-inches long with about two-inches of flavorful marbled beef piled on top. Each rib weighs between one pound and a pound and a half.  Mass quantities of moist, flavorful beef with thick, caramelized bark are easily extricated from each rib.  I’ve never had better (Sr. Plata, are you reading this?)

The cut by which any barbecue joint across Texas is judged is brisket, the national dish of the Republic despite what the Texas state legislature has decreed.   Texas Monthly calls Black’s brisket process “the weirdest smoking routine in Texas.”  This unique methodology involves cooking the brisket for eight hours in an all-wood rotisserie, leaving the briskets partially smoked.  They’re then stored in a cooler for two days after which they’re smoked for four hours in the old brick pits.  You can’t argue with results.  This is the best brisket we’ve ever had–by far.  Order at least a pound of it.  Each quarter-inch slice is framed by a flavorsome, caramelized bark worthy of the sobriquet “meat candy.”  So is the descriptor “melt-in-your-mouth.” Black’s brisket is akin to a life-altering religious experience, so good it may have ruined us for any brisket outside of Texas.

“Texas must have great chickens, too,” my Kim declared when I questioned her choice of a half chicken.  Indeed it does.  Black’s claims to serve the largest chickens in Lockhart.  They arrive at the peak of deliciousness through the process of being slowly smoked  over local local post oak. As readers of Gil’s Thrilling… know, chicken usually leaves your humble blogger in a state of dissatisfied torpor.  Not so at Black’s.  Unlike almost every other smoked chicken I’ve experienced, this barbecue chicken was beguiling even sans sauce.  Had it not been painful to pry myself away from the brisket and beef rib, I would have made like a chicken thief and eaten more than a couple pieces of it.

Forgive me if a previous paragraph left you with the impression that the sides are pedestrian.  They’re not!  It’s just that we drawn to the smoked meats like paparazzi are drawn to celebrities.   In fact, even if Black’s didn’t serve the most bodacious barbecue, we’d visit this Texas institution just for the sides, especially the potato salad, green beans, creamed corn and two types of coleslaw.  Desserts–peach cobbler, pecan cobbler, banana pudding and ice cream–are also available, but give me more of the aforementioned meat candy for dessert.  There’s none better in Texas.  That means there’s none better anywhere!