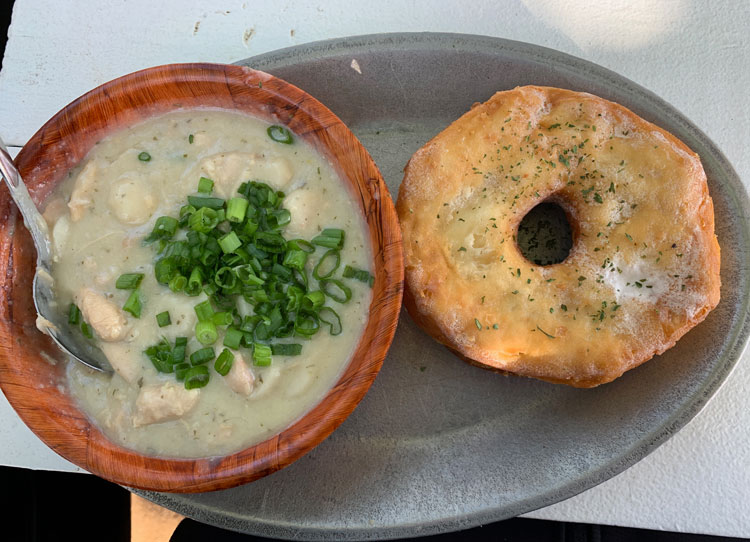 Donuts could have gone their entire existences fat, dumb and happy with a following–mostly cops, adult men my age (39) and households with annual incomes of less than $10,000–who expected nothing more out of them than we were already getting.  Essentially just fried or fruit-filled delivery mechanisms for quadruple our recommended daily allowance of calories, sugar and guilt, donuts have always been predictable, unchanging…reliably there for us.  Our expectations for these sweet, ring-shaped fried cakes weren’t exactly very high.  Then something changed.  Donuts became “gourmet,” experiencing a much-needed make-over.

In recent years, several foods have experienced a similar artisinal reinvention, metamorphosing from tasty enough moths into glorious, flavor-packed butterflies.  A more demanding public–especially those of us who self-gloss as foodies or gastronomes–didn’t want to leave well enough alone.  We wanted to explore possibilities, to actualize the foods we love most.  We did it with the most sacrosanct of plebeian foods such as hamburgers, hot dogs, sandwiches and donuts, transforming the prosaic into the inspired with new and different ingredients and preparation methods.

No one is under the illusion that these so-called gourmet innovations have supplanted their staid predecessors or converted their loyal sycophants.  There will always be consumer base completely content with Dunkin’ (formerly Dunkin’ Donuts), Krispy Kreme and others of the chain gang ilk. Chains will continue to command significant market share by pandering and winning over diners who are satisfied with their favorite foods unvaried, unchanged, made the way they’ve always been.  For the rest of us, there are innovators such as Austin’s Gourdough’s (with a name like that, you can bet it doesn’t serve healthy food).

Gourdough’s (an obvious portmanteau from the words “gourmet” and “doughnut”)  burst onto Austin’s mobile food kitchen (that’s food truck for you, Bob) in 2008, hawking its “big fat donuts” out of an Airstream trailer.  From the onset, Gourdough’s had a pied piper’s flute effect on millennials and Gen Z’s  who found donuts to be the perfect post potation food.  By 2010, even Anthony Bourdain’s No Reservations had profiled the original Airstream.  Two more trailers followed before the 2012 launch of Gourdough’s Public House,  an expansive American-style pub that’s a bar first then a brick-and-mortar platform for its carb-loaded Southern cooking, decadent donuts and lots of booze.

When I asked our server at Gourdough’s if she viewed Voodoo Donuts (a famous Portland-based interloper which recently set up shop in Austin) as competition, her response put everything in perspective.  “They put Captain Crunch and Fruit Loops on their donuts.  We make gourmet donuts, grown-up donuts.”  Great answer!  Apparently sprinkles and multi-colored breakfast cereal do not a gourmet donut make.  So what exactly does constitute a gourmet donut?   Gourdough’s head chef once used the terms “Decadence. Gluttony. Pure excess.” to describe the gormandizers’ dream and cardiologists’ nightmare proffered at Gourdough’s, but even that doesn’t exactly define what constitutes a “gourmet” donut.

Maybe this does: The National Restaurant Association’s annual “what’s hot culinary forecast” for 2018 named “donut with non-traditional fillings” as the 17th leading food trend with 64% of chefs surveyed agreed innovative donuts are on the rise.   Another survey conducted by Dawn Foods Products revealed a majority of Gen Z and Millennials are interested in trying unique and adventurous donut flavors–and not just sweet flavors.  Food Business News indicated culinary professionals are using donuts as a substitute for bread, buns and even nachos.  Nachos?  So, gourmet donuts are apparently innovative donuts with non-traditional fillings and unique and adventurous flavors which can serve as substitutes for other foods.  Gourdough’s meets this criteria and then some.

That Gourdough’s isn’t targeting the same demographic as Dunkin’ and Krispy Kreme is evident in its anthropomorphic “mascot,” a  mustachioed and chapeaued donut holding a frothy pint on his right hand.  It’s apparently got a Pavlovian effect on imbibers of adult beverages who now have a one-stop shop for booze and carbs.  From the outside, there’s little to distinguish Gourdough’s as an American pub.  It resembles many eateries.  Step inside and the telltale signature elements of American pubs are in place: low lighting, dark walls, masculine woods, wooden benches, flat screen televisions tuned to sporting events and ear-splitting music.

The menu is something else altogether, and not just because some of us aren’t entirely comfortable ordering items with homoerotic or double-entendre-laced names.  Albuquerque Academy and UT-Austin graduate Carmen Rising describes Gourdough’s donuts as “probably the worst thing you can eat, health wise. But that’s the point: sheer gluttony. These bigger-than-Texas sized donuts take food porn to a whole new level.  So indulgent; so worth indulging in.”  There are actually more savory donuts on the menu than there are strictly sweet donuts and many of the sweet donuts actually serve as the platform for savory dishes.  It’s a menu unlike you’ve ever seen anywhere outside Austin.

It therefore surprised us to see four salads on the menu, all served with a piping hot garlic donut.  It surprised us even more that we ordered one–the Popeye’s Roids (fresh spinach, strawberry honey balsamic vinaigrette, blue cheese crumbles, walnuts and red grapes).  It then surprised us to see how large a split order was.  What didn’t surprise us is how much we enjoyed the fresh composition of ingredients which go so well together.  Complementary components–the savory, earthy walnuts and fetid blue cheese crumbles are a delicious counterbalance to other complementary components, tart and sweet strawberry honey balsamic vinaigrette and grapes.  Most great salads are replete with such elements.

Teasing and pleasing your taste buds is one thing.  Making them work to discern where one flavor profile starts and another one stops is another.  That’s where sweet and savory combinations come in.  Having enjoyed dozens of Cubanos over the years, I had to wonder if Gourdough’s rendition of a Cubano (house-made pulled pork, fresh baked ham, Swiss cheese, thick cut dill pickles with yellow mustard on two grilled donuts) would provide a sweet-savory balance or would skew toward one flavor profile or the other.  Not surprisingly considering the thick cut dill pickles and yellow mustard, savory won over, relegating the sweet grilled donuts to a barely discernible supporting role.  Unlike traditional Cubanos, the pulled pork isn’t marinated in orange and lime juices, but in a pecan-Porter marinade that also skewed strongly toward savory.

Rather than approaching an entree from a studious perspective (unlike her husband), my Kim seeks only to maximize her enjoyment and on occasion to wax nostalgic.  She achieved both with Grandma’s Dumplins (slow-cooked chicken and donut hole dumplings served with pepper vinegar and a garlic donut on the side).  Her own grandmother made “the best chicken and dumplings in the world,” according to my bride.  Few foods exemplify comfort food as does the combination of long-simmered chicken and the resulting broth replete with handmade dough creations.  Gourdough’s will remedy whatever ails you.  They’re served steaming hot with each spoonful delivering warmth and comfort in spades.  The accompanying garlic donut is one of those “wow”-inspiring surprises of the type Gourdough’s seems to specialize.

One of the two donuts Carmen  had recommended is the Mama’s Cake (yellow cake filling with chocolate fudge icing).  I can well imagine Carmen’s mom, my dear friend Elaine, making such a donut.  It’s an amazing donut, an experience in sheer indulgence and pairing of two great tastes that taste great together.  After our decadent meal, we didn’t have room for this elevated donut dessert so we took it home and put it in the refrigerator.  The following morning when we finally got our appetites back, we devoured only about half of it, leaving the remaining oh-so-rich portion for the evening.  Apparently, we don’t have the mettle of Millennials who would have made quick work of this fabulous donut.

Johnny Cash once crooned about a ring of fire that “burns burns burns.”  Though he wasn’t singing about Gourdough’s Ring O’ Fire donut (chipotle-infused brownie batter, chocolate icing, brownie bites, salted butter, caramel sauce and cayenne candied pecans), this aptly named donut could definitely bring those lyrics to mind.  Ever since the days of Montezuma, chocolate and chile have been paired together to palate-pleasing effect.  This donut will not only please your palate, its piquancy may set it on fire.  Thankfully there’s a lot of chocolate to quell the burn and it does so deliciously.

On our way to Gourdough’s just a couple days before Thanksgiving, we espied a sign advising “Don’t forget to set your scales back ten pounds this week.”  Frankly, that’s not just good advice for Thanksgiving.  It’s good advice every time you visit Gourdough’s, the epitome of gourmet donuts.