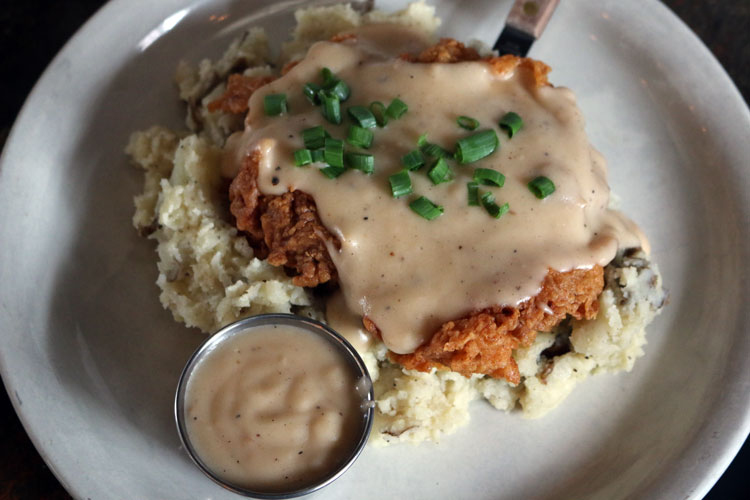 “I‘m only eating the skins, so the chicken’s up for grabs.”
~Joey Tribbiani

Several of my earliest memories of growing up in agrarian Peñasco, New Mexico involve chickens.  Some of those memories–such as getting viciously pecked by my Grandma Piedad’s cantankerous old rooster–were rather painful.  Other memories, however, were of mischievous fun my brothers and I had with our friends Estevan and Gabriel Lopez.  Once, for example, we emptied the contents of an entire can of beer onto the corn and grain mixture fed to the chickens.  It was hilarious fun watching drunken chickens stumble about and especially seeing the old rooster become overly amorous with the young chicks but not being able to do anything about it because he couldn’t retain his balance.

One of our favorite spectator sports, a weird sort of mix between football and professional wrestling, also involved chickens. We would catch fresh water sucker fish from the Rio Santa Barbara and toss them into the chicken coop.  The chickens would tear the fish apart and chase each other around the coop trying to take entrails away from whichever chicken had them.  Estevan and Gabriel, by the way, would grow up to make Peñasco very proud.  Estevan would become the Commissioner of the Bureau of Reclamation under the Obama administration while Gabriel is currently the Vice President for Research at the University of New Mexico.  Not bad for a couple of small town boys who liked playing with chickens.

My early memories of growing up in Peñasco also involved fried chicken.  My mom made the very best fried chicken in town.  She brined the chicken for hours in a mix that included buttermilk egg wash, flour and lemon.  Other ingredients remain as secret as the Colonel’s fabled eleven herbs and spices.  Years later when I had struck out on my own and decided to see what all the hype was all about with regards to the Colonel’s chicken, I wondered how such foul fowl could be so admired.  It was overly greasy and in dire need of desalinization.  Obviously, the Madison Avenue mad men had pulled a fast one on gullible Americans.

It wasn’t until 2012 when my friend Bill Resnik and I visited Stroud’s in the Kansas City area that I finally found fried chicken as fabulous as my mom made.  Strouds’s, whose motto involves “choking our own chickens” pan-fries its poultry to a crispy golden hue in a heavy, obviously well seasoned cast iron skillet.  The results are a light, delicate crust that seals in moistness and flavor. After his first bite of Stroud’s chicken, Travel Channel celebrity Adam Richman called it “whole body-licking good,” meaning it is several orders of magnitude better than the Colonel’s finger-licking good chicken.  Surely, I thought, there  may be no better chicken in America.

It therefore shocked me to find out chicken cognoscenti didn’t share my opinion of Stroud’s glorious fried chicken.  Sure, they thought Stroud’s was pretty good stuff, but Eater’s panel of Southern food and fried chicken experts rated it only thirteenth in the food site’s ranking of the 75 best fried chicken places in America.  Three purveyors of fried flightless fowl with a presence in Austin, Texas also made the list.  Gus’s World Famous Fried Chicken was adjudged the second best fried chicken under the spacious skies.  Right behind Gus’s–rated the third best fried chicken in the country–was Lucy’s Fried Chicken, a four-store local chain in Austin.  We had to go there!

Thematically, the Lucy’s Fried Chicken restaurant we visited in the South Congress neighborhood isn’t much fancier than the chicken coop long ago tended by Estevan and Gabriel Lopez.  At least, the heated outdoor biergarten isn’t.  The indoor seating space is plenty fancy with enough Pearl beer at the bar to keep the Lopez chickens stumbling about for months.  Despite the dampness of the air on a crisp grey November day, many diners seemed to prefer the patio where as you walk in, you’ll espy a life-sized mannequin bearing an uncanny resemblance to a young Willie Nelson.  He occupies the very front table at the expansive seat-yourself-patio.

Willie, an avowed Austinite, actually visits Lucy’s on occasion, regaling the staff with his down-to-earth wit and wisdom.  “He’s as nice as can be,” we were assured by our server.  Sadly, Chris Stapleton, country music’s baddest voice, has yet to visit.  That’s what we were told as his throaty tenor-rich rendition of Tennessee Whiskey played on the restaurant’s sound system.  As you may have surmised, at every restaurant we visited Austin’s eclectic blend of rock and blues, country and jazz played in the background, but never so loud that you can’t have a conversation at normal voice.

If you prefer to give fried chicken the bird, you’ll find many other options from which to choose.  Wood-fire-grilled oysters are a very popular draw and to a lesser extent, so are mountain oysters (look it up).  Frankly, we were quite surprised at the diversity of the menu.  It’s got something for everyone, including vegetarians.  Carnivores and vegetarians alike will make quick work of Lucy’s fried green tomatoes (marinated in Lucy’s “secret buttermilk blend” and deep fried, with chipotle ranch).  Sliced to about a quarter-inch thickness, the tomatoes are sheathed in a light golden batter and are fried only long enough for the batter to adhere.  That means the green tomatoes taste like green tomatoes–firm, not mushy.  The accompanying chipotle ranch is better than any remoulade we’ve had with fried green tomatoes. It’s got delightful smokiness and heat.

Mark Twain once said “Perhaps no bread is as good as good as Southern cornbread.” He also said some rather unsavory things about Northerners attempting to make corn bread, but that’s a topic for another day.  It’s a topic my New York snowed-in friend Becky Mercuri and I discuss often.  More than anyone I know, Becky would have enjoyed the cornbread at Lucy’s.  Studded with sweet corn niblets, this cornbread is dense, moist, sweet and absolutely delicious.  It’s even better when you slather on the tequila butter with its garlicky, oniony  notes.  How we wished “butter shots” were good for you.

In honor of my friend Bruce “Sr Plata” Silver, I had to have chicken fried steak at least once during our visit to Austin, so why not have the best.  Eater writes “Lucy’s already knows how to fry chicken to perfection, so that translates well for its chicken fried steak, served with a creamy gravy made with Pearl beer.”  That gravy is fabulous…just hook up an intravenous drip to my mouth good.  Sure it’s undoubtedly unhealthy, but you only live once.  The chicken fried steak isn’t the plate-covering slab Sr. Plata likes, but where it lacks in plate coverage, it makes up in girth.  It’s tender enough to cut with a fork and its golden breading is crispy, salty and addictive.  Joey Tribbiani might be satisfied with eating only the breading, but he’d be the only one.  The chicken fried steak is served atop skin-on mashed potatoes.  Were it not for the extra ramekin of Pearl beer gravy, the mashed potatoes would have been rather on the dry side and we like our mashed potatoes creamy and buttery.

My Kim ordered the four piece mixed basket of fried chicken with a pickle and jalapeño.  It’s what she would have ordered regardless of ratings or rankings.  She’s got the attitude that no one’s impressions matter, only hers…and she’s absolutely right in feeling that way.  Lucy’s fried chicken lived up to expectations.  Bite into the light and crispy breading and wisps of fragrant steam waft upwards to your eagerly awaiting nostrils.  It’s an olfactory-arousing experience that preludes some of the most delicious fried chicken you’ll ever have.  You should know that my Kim is the anti-Joey Tribbiani, typically discarding chicken breading on sight.  In Albuquerque who can blame her?  Most Duke City restaurants bread their chicken so thickly you practically need a jackhammer to pierce through it.  Not so in Austin where light breading means just thick enough to sheath the moist, juicy chicken underneath.  This is swoon-worthy chicken, as good as any she’s ever had.

Lucy’s doesn’t have a dessert menu.  It’s got a pie menu.  Served by the slice are a number of tempting pies, including a lime pie (lime custard with a graham cracker crust) with no pretensions of being a key lime pie.  It doesn’t matter.  This is an excellent pie.  The lime custard is dense and delicate with a pronounced, though not lip-pursing, citrusy tang.  The graham cracker crust is light and fine, playing a supporting role to accentuate the lime flavor.

The South Congress area Lucy’s is such a warm, welcoming milieu playing such great Texas music tracks that you might find yourself thinking about hibernating there until it’s time for your next meal…and since you’re already at a chicken joint, why not more chicken.  Lucy’s is a great place for it.