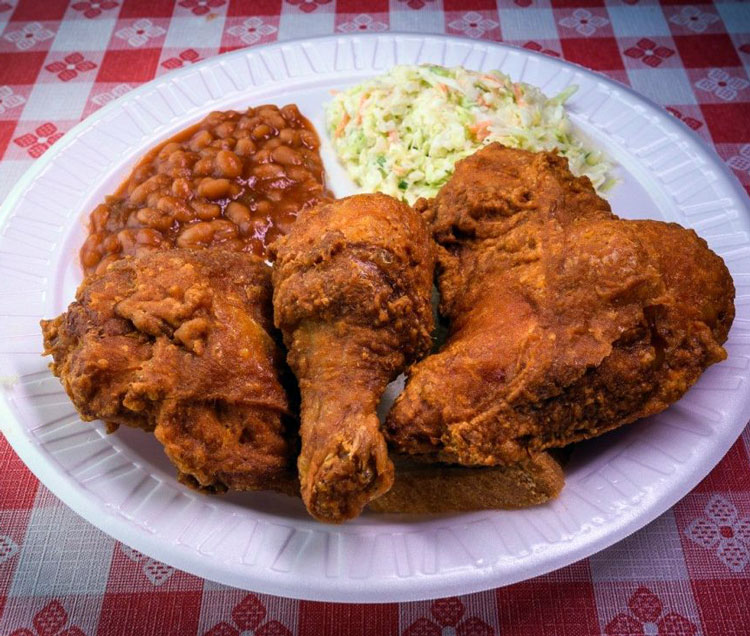 When I told my friend Carlos my Kim and I would be enjoying Gus’s World Famous Fried Chicken during our trip to Austin, he quipped “when did Los Pollos Hermanos open a restaurant in Texas?”.  Wrong Gus.  Obviously Carlos was joking about Gus Fring, the stoic Argentinian entrepreneur on the Albuquerque-based Breaking Bad television series.  Gus Fring, as you might recall, used his fried chicken franchise Los Pollos Hermanos as a front for methamphetamine distribution throughout the American Southwest.  The Colonel may have had eleven herbs and spices, but Gus had blue-hued crystal meth.

The Gus’s World Famous Fried Chicken of which I spoke is a burgeoning franchise which got its start in Memphis, Tennessee.  While Nashville’s incendiary, cayenne-heavy, finger-dying hot chicken may be all the rage, Music City’s piquant poultry seems to be about testing your mettle and demonstrating pain is a flavor.  Gus’s fried chicken, on the other hand, is all about flavors that titillate your taste buds and linger on your lips.  Sure, it’s got heat, but just enough to give you a buzz, not to scald your mouth…and it doesn’t leave your fingers oily and orange.  Moreover, it’s absolutely delicious, easily the best spicy fried chicken we’ve ever had.

That’s not just my opinion.  Gus’s fried chicken has been touted by culinary cognoscenti as some of the best fried chicken prepared under spacious skies, and not just of the spicy genre.  In 2018, for example, The Daily Meal went in search of the best fried chicken places in America and rated Gus’s second from among 75 purveyors of palate-pleasing poultry (Stroud’s of Kansas City, my personal favorite ranked 13th).  Other national publications, including Saveur and GQ have accorded similar praise.  GQ once called Gus’s Fried Chicken one of the top ten meals in the United States.  Its birthplace of Memphis may be considered a barbecue hotbed, but culinary-crazed chicken aficionados pilgrimage to Gus’s even before we take in Graceland.

In the 65 years since its founding, Gus’s Fried Chicken has seen significant expansion.  It now has a presence in some 26  locations across the fruited plain, including several cities that already had long-established nationally-touted fried chicken restaurants (Austin, for example, had two fried chicken restaurants rated among The Daily Meal’s exalted 75).  It’s probably safe to assume that wherever Gus’s launches, it quickly becomes a local favorite.  Gus’s World Famous Fried Chicken lives up to the hype–and then some.  It’s several orders of magnitude better than the Cajun fried chicken we enjoyed throughout the Deep South.  Popeye’s isn’t even in the same stratosphere.

Gus’s in Austin is situated in the bustling downtown area where parking nearby is just a pipe dream.  Your walk will just build up your anticipation as will waiting in line behind equally famished diners then waiting even longer for your order to be filled.  Gus’s doesn’t serve fried chicken by the bucket, but you can get a “snack sized” portion with as many as 20 pieces.  You can also purchase it by the individual piece (breast, thigh, leg, wing) or by the plate where it’s served with baked beans, slaw and white bread though substitutions will cost a bit more.  A half-chicken, one of each piece, is a good bet.

17 November 2018: There’s no one quality that makes Gus’s fried chicken special.  From the outside in let’s start with the crust.  It’s the antithesis of the heavily breaded (and much dreaded) fried chicken of which Gil’s Thrilling… has often lamented.  Peanut oil renders the chicken crispy, glistening to an mahogany-hued color.  This is crust you’ll want to eat, not discard like some offensive shell.  You’ll feel the heat emanating from the Gus’s crust right away.  It then settles in with its pleasant piquancy, revealing a deeper, more complex flavor profile.  The chicken is tender, moist and flavorful down to the bone (the only part of the bird we didn’t eat), with a just right salty undercurrent.  It’s practically life-altering.  So are the baked beans, maybe the best I’ve ever had.  I’m still cursing myself for not having ordered a double portion.

23 November 2018: As our week-long eating tour of Austin came to a close, we reminisced about each restaurant experience, ultimately concluding that the one restaurant we should again visit before leaving Texas was Gus’s.  Even though we were quite sated after enjoying some of the very best pizza in the Lone Star State, we picked up two more half-chicken orders.  It speaks volumes that even cold Gus’s fried chicken is swoon-inspiring.  We may just have to move to Texas to enjoy it all the time.

It’s very telling that whenever Gus’s World-Famous Fried Chicken launches in a new location, it’s not viewed as an interloper there to supplant the local favorites, but as a very welcome and wonderful purveyor of transformative fried chicken almost everyone will love.