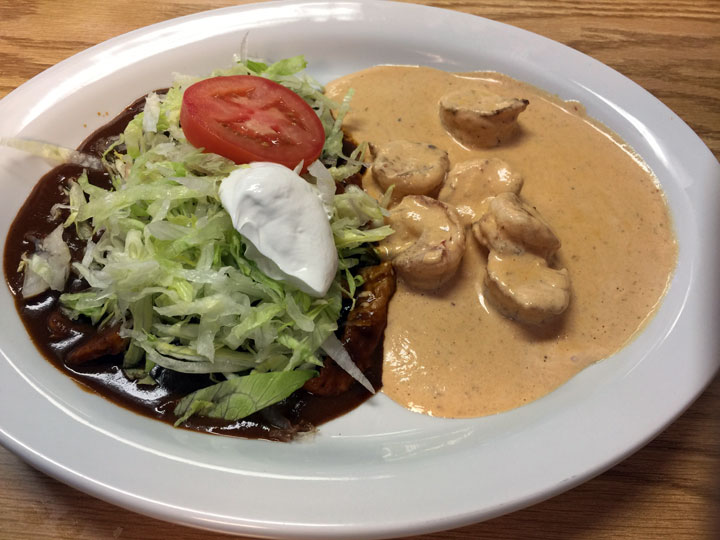 No matter how broad-minded we may perceive ourselves to be, most of us are burdened by covert biases and prejudices that reveal themselves at inopportune times. One of mine was divulged during my inaugural visit to El Agave Mexican Restaurant in Rio Rancho. After being greeted warmly by effusive hostess Lilly Venegas (who could not possibly have been nicer), I began my usual “twenty questions” routine to learn everything I could about the restaurant. Beaming with pride, she told me her brother-in-law had owned and operated two Mexican restaurants for more than twenty years in Raleigh, North Carolina.

North Carolina! North Carolina! My mind raced to the circa 1980s Pace Picante Sauce commercial in which several hungry cowboys threatened to string up the cook for serving a “foreign” salsa (translation: not made in Texas). To be fair, my ridiculous notion that good Mexican food couldn’t possibly be prepared in North Carolina was based on having lived and traveled in the Deep South for eight years. During those octennial years of Mexican food deprivation, we found only one restaurant in Dixie which served good Mexican food. We didn’t find any good Mexican food in New Orleans, Atlanta or Nashville. We should have visited Raleigh!

For nearly two decades, Hector Venegas and his family owned and operated Los Tres Magueyes, winning over Raleigh with their delightful array of authentic Mexican dishes. The Venegas family didn’t “dumb” down their Mexican food as so many restaurants in the Deep South tended to do when we dwelled in Dixie. Confident that the more savvy citizenry of New Mexico would love the authenticity and deliciousness of their fare, they left the menu completely intact–even retaining the leather-bound menu cover emblazoned with the name of their restaurants in North Carolina.

As in Raleigh, the Venegas family owns and operates two Mexican restaurants. Both are christened El Agave. The original operates in Santa Fe in the famous Burro Alley. It’s been pleasing palates since 2015 and is owned by elder scion Hector Vinegas. His brother Carlos and lovely bride Lilly launched the second instantiation of El Agave in Rio Rancho in October, 2017. My friend Bruce “Sr Plata” Silver was there three days later and loved it. He was confident I would, too.

If you haven’t seen El Agave during your travels through the City of Vision, it’s probably because its storefront doesn’t face heavily trafficked Rio Rancho Boulevard. Instead, it’s set back on the northeast corner of the timeworn Lujan Plaza shopping center which until 2018 housed Namaste and is still home to Stack House Barbecue. The same obfuscated corner where El Agave is situated was once home to such short-lived eateries as immediate predecessor El Maguey in addition to Ahh Sushi, Relish (although the original in Albuquerque remains a city favorite), Pastrami & Things and other restaurants. It’s a tough location in which to succeed.

Carlos and Lilly are in it for the long haul. They recognize the challenges of operating a restaurant just a bit off the well beaten-and-eaten path. Moreover, they realize they have to cultivate customer loyalty one guest at a time, that they have to prove themselves with every single dish they prepare and serve. With a menu featuring virtually every familiar Mexican dish as well as some unique specialties, El Agave has a great chance to succeed. All it needs is to be discovered. Visit once and it’s a certainty you’ll return time and again.

22 January 2018: As you peruse the menu, Lilly will ferry over a basket of chips and plastic molcajete of salsa to your table. Both are made on the premises first thing in the morning as are the terrific corn tortillas accompanying many entrees. The chips and salsa are first rate, among the very best in the metro. What distinguishes this salsa from so many others is that it’s made with chipotles, the smoky dried jalapeño. With a depth of flavor and kick of piquancy, this salsa is addictive–and it’s nearly as good as the exemplar chipotle-based salsa served at the Plaza Cafe South Side in Santa Fe. To think Raleigh had such a delightful salsa before Rio Rancho did gave me hope the rest of the menu would deliver, too.

22 January 2018: Unable to decide between the Mole Ranchero and Camarones A La Crema, I asked Lilly to surprise me. The surprise was the Carlos was willing to prepare a half portion of both. Now that’s the type of service that cultivates loyalty. This pleasurable combination was served with refried beans topped with melted white cheese, Spanish rice and four hot corn tortillas. The Mole Ranchero, reputedly one of the easiest moles to prepare (though still very complex) with fewer ingredients than other moles, was a delicious and pleasant surprise in that it wasn’t overly sweet as some mole tends to be. That mole covered a moist, tender sliced chicken breast.

22 January 2018: Even better than the Mole Ranchero was the Camarones A La Crema (grilled shrimp topped with a savory cream sauce concocted from chipotles, sour cream and spices). The grilled shrimp had a snap of freshness with a delicate flavor tinged with the smokiness of the grilling process. It’s a perfect foil for the rich cream sauce with its faint smokiness and sour-savory notes. You’ll be grateful for the steamy corn tortillas with which you’ll sop up every bit of that delicious sauce.

30 November 2018: Culinary logophiles who get wrapped around the axle when it comes to the proper and precise use of words would probably argue that El Agave’s sincronizada is misnamed.  By strict definition, a sincronizada is a Mexican sandwich in which ham and cheese are pressed between two tortillas, which are then grilled.  In other words, a ham and cheese sandwich on tortillas.  El Agave’s version is stuffed with chicken, onions and a Mexican white cheese with good melting qualities served with sliced avocados and sliced jalapeños.  Call it a quesadilla if you prefer, but you will call it delicious.

30 November 2018: During my second visit, I asked Lilly to select something from the menu that was uniquely different from what I enjoyed my inaugural visit.  She selected the Nuevo Guadalajara Special (two chicken flautas, steak, tamal, Spanish rice, sour cream), a dish with diversity.  The chicken with which the flautas are generously stuffed is reminiscent of stewed chicken in that it’s moist and flavorful.  The soft and pliable fried tortillas hold in that chicken well.  The tamal, a nice balance between corn masa and shredded pork, is slathered in a red chile, albeit not a New Mexican chile. The chile has virtually no piquancy and has pervasive sweet notes.  If you’ve ever had steak at a Mexican restaurant, you know you’re not in for a thick slab of beef.  The steak on the Nuevo Guadalajara Special is very much on the thin side, but it’s quite good.

If like me, your initial inclination is to dismiss a Mexican food restaurant that came from North Carolina, El Agave will quickly change your mind. It’s a very good, very authentic and absolutely delightful little hole-in-the-wall restaurant that’s as Mexican as a Mexican restaurant can be.