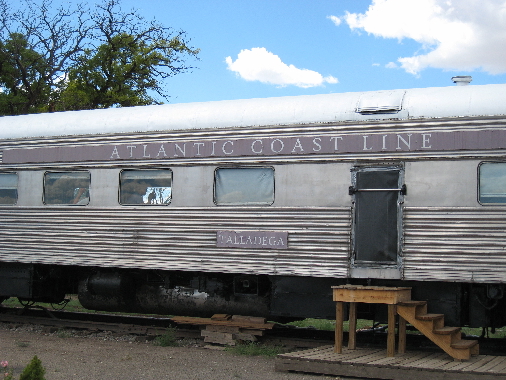 History might best be defined as the interaction of people with one another and with their environments. Often those environments and the people indigenous to them are hardened by conditions and circumstances. Fewer than 200 years ago, French and American traders endured tremendous hardship and peril on the route that came to be known as the Santa Fe Trail which connected New Mexico’s capital with the United States.

Large wagon trains ferried much coveted United States merchandise from Independence, Missouri to Santa Fe, earning enormous profits in the process. Trade was made easier in the 1880s with the introduction of the famous Atchison, Topeka and Santa Fe (ATSF) railroad. Interestingly (and despite its name), the ATSF never quite reached Santa Fe. Its tracks followed the Santa Fe Trail but because of the steep grades of the hills surrounding Santa Fe, it was left off the main line and the railroad was built instead through Lamy. Santa Fe was connected later by an eighteen-mile spur line from Lamy.

Lamy, named for Archbishop Jean-Baptiste Lamy, educator, missionary and the first archbishop of the American territorial period, is still very much a train town. The Amtrak system still runs trails daily in each direction (west to Los Angeles and east to Chicago) and both trains stop at Lamy. The train station at Lamy remains much the same as it was when a dozen passenger trains a day ran along the ATSF’s main line. Parked to the immediate west of Lamy’s long-brick waiting platform and train station is a permanently stationed museum and functioning cafe appropriately named the Lamy Station Cafe.

The Cafe is situated in a restored Atlantic Coastline dining car built in 1949 and named the Talladaga. The Talladaga was lovingly restored by Michael Gintert, a lifelong lover of all things train. Gintert spent more than a year and a half painstakingly restoring the railroad car. He launched his restaurant in November, 2006. It offers a stationary trip to yesterday with a decor that is true to its lineage.

Trace that lineage and you’ll find that the original American diner–streamlined, elongated and narrow in appearance with chrome and stainless steel appointments throughout–was never intended to remain stationary. As opposed to horse-drawn wagons equipped to serve hot food, the original diners were actual dining cars on railways. When dining cars were no longer fit for service, they were often used as inexpensive diners at a (stationary) location near a train station or alongside a railroad at another location.

From a historical perspective, the Lamy Station Cafe holds true with to the diner tradition of serving pretty generic American food such as hamburgers, sandwiches and popular breakfast favorites such as French toast and several egg dishes. Traditional New Mexican entrees such as breakfast burritos and reputedly one of the best green chile stews anywhere are also available. For the best of both lunch and breakfast, visit the Cafe on Sunday for brunch when an abbreviated eye-opening menu makes it worth getting up. The Cafe is open only for breakfast and lunch. Brunch hours are 10AM to 3PM.

If the aforementioned green chile stew isn’t available, maybe some good old-fashioned Texas chili will just have to do. While insulting all things Texan is one of the favorite pastimes of any native New Mexican, even us born-in-the-wool natives will appreciate the Cafe’s chili (despite the atrocious spelling of the word). Unlike traditional Texas chili con carne, the Cafe’s version includes kidney beans. It also features hamburger meat, oregano, cumin, garlic and chili in a tomato soup thin chili with a dollop of sour cream. No self-respecting New Mexican would prefer Texas chili when the “real stuff”, our native chile, is available, but this will more than do in a pinch.

For real New Mexico chile, the Cafe’s breakfast burrito smothered in red and (or) green chile is a must have. The wafting aroma of the green chile as the waitress passes by your table with a breakfast burrito bound for another diner will make you appreciate the relatively cramped quarters in which you’re seated. There is no aroma in the world quite as intoxicating as that of blistering, spitting green chile when it’s roasting on a hot comal. My dear friend Becky Mercuri has told me she’d like to wash her hair in that aroma. One whiff of the Lamy Station Cafe’s green chile and you’ll wish for the same thing. The Cafe’s green chile is procured from a local distributor committed to using the freshest and finest local ingredients.

The red chile comes from Socorro and it’s an excellent dark red chile, rich in flavor and redolent with a sweet, earthy fragrance that characterizes the best red chile in New Mexico. As captivating as is the aroma of the green chile, the red chile may be even better. For the best of both worlds, you’ve got to order your breakfast burrito “Christmas” style. A large tortilla completely enfolds perfectly scrambled eggs, tender potatoes and your choice of turkey sausage or bacon. It is topped with melted Cheddar cheese and served with your choice of pinto beans or potatoes. Although Yukon Gold potatoes is an option, the pinto beans are not to be missed.

If I’m rhapsodizing too much about the Lamy Station Cafe’s breakfast burrito, it’s because it is one of the ten best of its genre I’ve had in New Mexico and I’ve had hundreds.Traditional American breakfasts include the Conductor, two eggs any style, bacon or turkey sausage, Yukon Gold potatoes and toast and jam or a tortilla.

The Conductor is beautifully plated. The bacon is crisp and stiff not floppy and limp. The eggs are perfectly seasoned and prepared to your exacting specifications. The Yukon Gold potatoes are of a beautiful golden hue and are perfectly tender without being mushy.

There are but a few dessert selections, but those few are magnificent. The apple crisp is served warm and topped with a scoop of cold, rich ice cream. Using apples that retain some tartness among the prominent sweetness is the secret to great apple crisp which really should derive most of its sweetness from the crumbly, crunchy and crispy crust. This is a great apple crisp!

Even better might be the Cafe’s bread pudding which tastes like really great French toast topped with a rich, sweet caramel sauce. It’s in a stellar class among bread pudding in New Mexico, a dessert Santa Fean magazine once described as “sweet heaven on a plate.”

Lamy is an idyllic and charming milieu in which to dine in one of New Mexico’s least known historical settings. The Lamy Station Cafe is a real treasure!