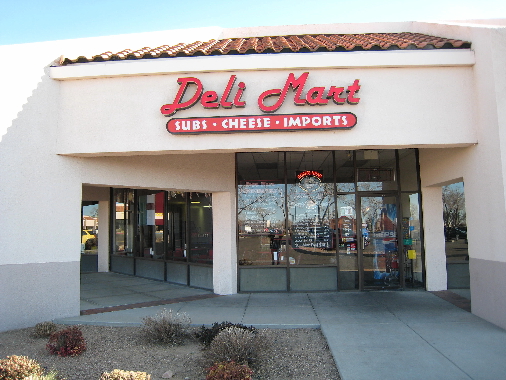 The human capacity for developing attachments can be a bit of a conundrum. Although my very being is eternally rooted in New Mexico, returning to America in 1987 after three years in England made me feel as if I had left my home behind.

Similarly after two years in Massachusetts, I returned in 1979 to my beloved New Mexico with a huge hole in my heart, pining for so many things about my first home as an adult.

One of the things I missed most about the Bay State was the tremendously creative things that could be generously crammed inside a sub (make that “grinder”) roll. The polished art of crafting a sensational stuffed sandwich had not made its way to the Land of Enchantment.

I commiserated frequently with my great friend, New York native Adelchi Parisella who also longed for the incomparable sandwiches uniquely fashioned in the East Coast. Fortunately in 1980, we discovered Deli Mart, a New York style deli and market on Juan Tabo just north of Menaul.

The lingering aroma of fine deli meats and cheeses was so familiar, our olfactory senses went into overdrive trying to ingest them all. The well-stocked shelves offered culinary treasures to please chefs of all skill levels and the menu was replete with sandwiches with which we had both been intimate.

Best of all, Deli Mart served a more than passable pastrami sandwich, albeit not as generously endowed as those I came to love on the East Coast and (gasp) served with lettuce and mayo.

The Juan Tabo store closed in the early 1990s, but Kim and I were fortunate enough to build a home in Albuquerque’s West side, a scant mile or so from the Alameda West Shopping Center home of the city’s second Deli Mart.

The menu features than 20 appetite sating sandwiches as well as several hot entrees such as lasagna, pasta fazool, baked ziti and manicotti. Fromage fanatics can feast on more than 60 cheeses from all over the world as well as on a fine selection of imported meats, olives, pastas, olive oils and such domestic favorites as potato salad and macaroni salad. If you’re craving cannolis or Italian pastries, Deli Mart has those, too.

I have both words of praise and condemnation for the lasagna–praise because it has all the elements shared by the best lasagna: wide strips of Barilla pasta layered with rich, creamy ricotta; savory homemade marinara and, since you can’t have enough cheese, a velvety mozzarella and Romano cheese.

My complaint is that the first time we had it, we were told to heat a take-out order of lasagna for six minutes when four minutes would have been enough. Remarkably even though the pasta and sauce desiccated on the edges, it was still some of the best lasagna we’ve had in the Land of Enchantment (as much a compliment to Deli Mart as an indictment of Italian food in New Mexico).

Deli Mart also serves hearty, wholesome soup, the type you might see a picture of if you look up the term “comfort food.” One of the most popular is wedding soup replete with hand-rolled meatballs, orzo and spinach in a chicken broth. Maybe even better is the cream of broccoli soup which will warm the cockles of your heart and goes down oh so smoothly.

Eight- and twelve-inch sandwiches are probably the most popular take-out or dine-in items. New Orleans transplants might consider it sacrilege to see a muffaletta prepared on a sub roll instead of the traditional round muffaletta bread and would probably have a coronary to see Deli Mart substitute the olive spread with relish and Italian dressing, but I’ve had a couple of them and certify them as more than passable. Adkins Diet proponents can even have their muffaletta sans bread (pictured above).

More than 25 years have now elapsed since I lived in Massachusetts, but frequent visits to Deli Mart trigger memory inducing experiences that take me back to my youth and my introduction to sandwich nirvana.