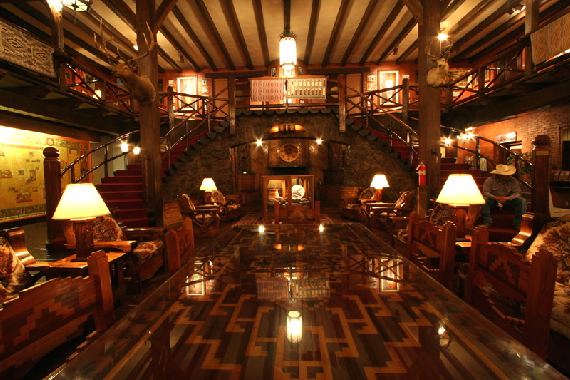 In the 1930s and 1940s, sometimes considered the halcyon days of Western movies, the Four Corners region was the site of many cinematic classics, quite a few featuring battles between the cavalry and “misplaced” American Indians.  Never mind that the Cheyenne and the Sioux actually lived hundreds of miles (and several states) away, the region’s dramatic topography was a perfect backdrop for cowboy conflicts with these Midwestern Indians. Besides that, Navajo “actors” were plentiful.  Producers would attire them in war bonnets, arm them with lances and hand them scripts in which they would invariably succumb to the “righteous might” of the charging cavalry.

One movie, John Ford’s classic Cheyenne Autumn, featuring Navajo actors pretending to be Cheyenne, has an almost cult following in Navajo country. Navajo members watching the movie today roar with laughter when Cheyenne leaders speak in Navajo, supposedly discussing treaties and tribal needs.  What the Navajo actors in the film really said in somber tones generally concerned the size of the colonel’s privates (not the ones who march) or some equally disrespectful or bawdy double-entendre.

When filming took place in Navajo country close to Gallup, New Mexico, the stars found a temporary home at the El Rancho Hotel, a rustic Old West style hotel built by the brother of a Hollywood movie magnate. Since its opening in 1937, the hotel has been a popular stopping point along old Route 66.  Its guest registry includes such luminaries as Kirk Douglas, Lucille Ball, Spencer Tracy, Katharine Hepburn, Allan Ladd and Ronald Reagan.  El Rancho is now protected by the National Historic Preservation Society.

The El Rancho can be described as Route 66 meets the Old West.  As shown on the photo at top (courtesy of Erik Berg), at night the hotel is festooned with vibrant neon signage that cuts a luminous swath through the night sky. A two-story open lobby complete with circular staircase is decorated in grandiose (albeit manly) fashion with heavy wooden furniture and ornate Navajo rugs. Massive vigas are adorned with mounted trophy animal heads.  The walls on the upstairs portion of the lobby are embellished with autographed photos of the many stars who have spent the night at El Rancho.  It could take hours to study all the movie memorabilia.

When they weren’t sitting on horses, the movie stars ate, drank and slept at El Rancho.  Their drinking was done at the 49ers Lounge. In 2006, Esquire magazine named the 49ers Lounge one of the top fifty bars in America, placing in elite company with big city bars in Chicago, New Orleans, San Francisco and New York City.  According to the article, the lounge is “both rough-hewn and rough around the edges. It doesn’t serve a lot of fancy cocktails, but it has great booze.”

The hotel’s full-service restaurant serves three meals a day in a New Mexican and Native American setting.  The lunch menu includes several burgers and sandwiches all named for movie stars who dined on the premises.  The Doris Day sandwich, for example, is a sirloin steak on French bread while the John Wayne burger includes guacamole.

The salsa is fresh and lively thanks to piquant jalapenos and ripe tomatoes chopped finely.  Accompanying chips are crispy and low in salt allowing the salsa to command all your rapt attention.

The best way to sample the restaurant’s New Mexican food is by ordering the combination plate (named for an actor whose name I can’t recall).  Served piping hot, the plate includes a tostada, beef taco, cheese enchilada, beans and rice. The tostada starts with a crispy shell slathered with a creamy guacamole then topped with lettuce, chopped tomatoes and Cheddar cheese.  The star of this item is the guacamole which has the pronounced taste of fresh avocado. Once you get past the lettuce and tomatoes, the taco is quite good with well-seasoned beef.  The enchilada is cheesy in and out then slathered with a cumin heavy red chile (or green if you prefer).  The chile is of the mild variety with barely discernible heat.  The beans are of the refried variety while the Spanish rice is tomato-based and slightly sweet.

Burger aficionados might be hard-pressed to select from among several intriguing combinations all named for the Hollywood glitterati of the Old West movie days.  The Ronald Reagan (probably not named for his riveting performance in Bedtime for Bonzo) is a popular choice for fans of the great communicator.  A half-pound of beef is topped with a slice of cheese and two strips of bacon then garnished with lettuce, onion and tomato.

Ronald Reagan once said about jelly beans, his favorite snack, “you can tell a lot about a fellow’s character by whether he picks out all of one color or just grabs a handful.” It’s only appropriate that the burger named in his honor also includes a pill cup’s worth of jelly bellies of several varieties.

Situated on old Route 66, the El Rancho Hotel earns its motto of “Charm of Yesterday, Convenience of Tomorrow” with all the modern amenities of a 21st century hotel.  At the very heart of Indian country, it is a great stopping place en route to some of the most picturesque sites in the Four Corners, most within a day’s drive.

The El Rancho is within easy walking distance of several art galleries on Route 66.  Offering an exquisite ensemble of artistic creations from throughout the Southwest at much better prices than Scottsdale or Santa Fe, Gallup is well known to savvy collector in search of a bargain.