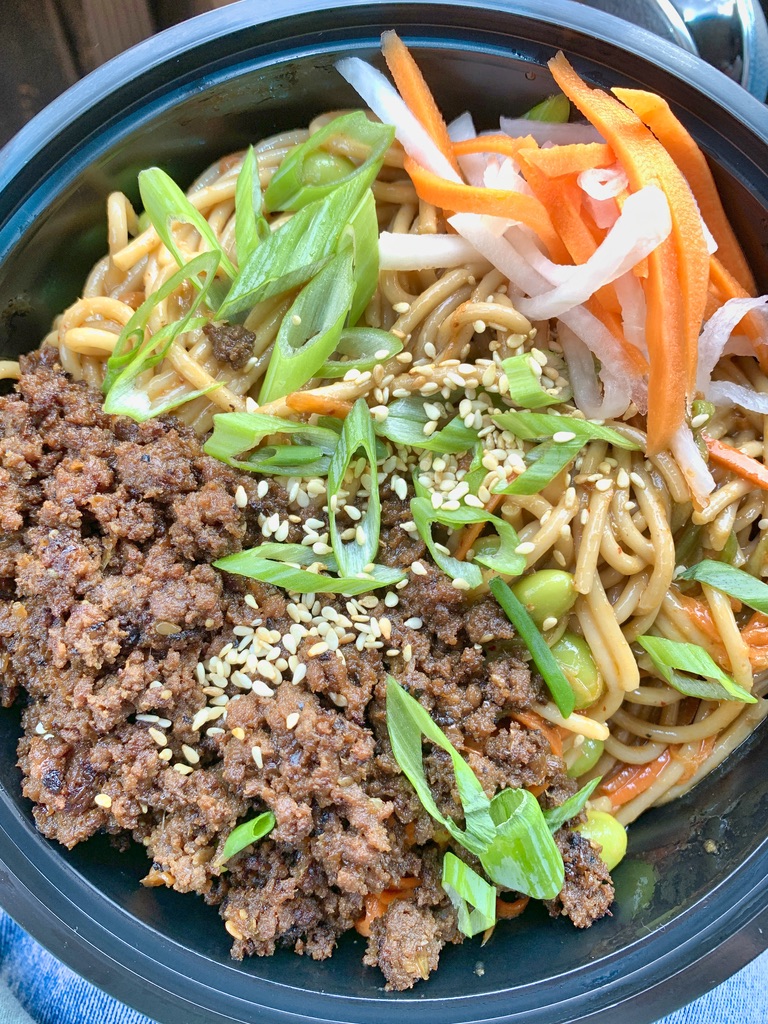 In the vernacular of the cannabis culture–as I learned growing up in Northern New Mexico–the term “moto” translates from Spanish to “someone who enjoys “mota,” a slang term for marijuana.”  Visitors to the Duke City from Española, Peñasco, Chimayo and other villages up North would probably giggle if they espied the mobile kitchen (that’s food truck to you, Bob) named Umami Moto.  Though Umami Moto won’t be able to sate the cannabis cravings of any weed wanters, it would certainly take care of their munchies after they’ve scored a lid or two.

With all due respect to hippie-lettuce-lovers everywhere, the term “moto” for which the aforementioned mobile kitchen is named is a Japanese term which means: “the cause; the foundation; the basis.”  Umami is also a Japanese term, but it’s one that’s not so easy to define.  You might even say it’s the je ne sais quoi of culinary terms.  At its essence, umami is the “fifth taste,” after salty, sweet, sour, and bitter, but it’s so much more.

Writing for New Yorker, Hannah Goldfield defined umami as “that other thing, the thing you didn’t even know needed a concept or a name until someone pointed it out. That deep, dark, meaty intensity that distinguishes seared beef, soy sauce, ripe tomato, Parmesan cheese, anchovies, and mushrooms, among other things. It hits the back of your throat and leaves you craving more.”  She goes on to explain that umami translates to the “deliciousness” which occurs “when molecular compounds in glutamic acid—glutamates—bind to specific tongue receptors.”

Taken together Umami Moto translates from Japanese to “the basis for deliciousness.”  That’s an apt description (as well as ambitious mission) for the mobile kitchen which hit the mean streets of Albuquerque in 2019 after nine years of tearing it up in Cleveland (Ohio, not New Mexico).   Its pedigree includes a “Best of Cleveland” award in 2012 from the Cleveland Scene, an alternative weekly similar to Albuquerque’s Alibi.

Before the covid crisis, Umami Moto was making significant inroads in the Duke City dining scene.  As with brick-and-mortar restaurant operations, owners Jae Stulock and Sandy Madachik are figuring out how to navigate the “evolving normal.”  We caught up with them at the Marble Street Brewery’s Northeast Heights Taproom.  Jae told me he and Sandy relocated to New Mexico because they love the outdoors, though he does miss the water.  I reminded him that Cleveland’s Cuyahoga River actually caught fire a few years ago.  Though he’s heard all the “Mistake by the Lake” jokes, the Cleveland native is very gracious.

Jae sees parallels between Albuquerque’s evolving culinary scene and that of Cleveland which he explained has four active James Beard award-winning chefs as well as a Michelin starred chef.   Cleveland also has a very dynamic mobile culinary scene.  As such, being singled out as one of the best is quite an honor.  At one point, Umami Moto’s popularity had grown so much that Jae and Sandy launched a brick-and-mortar operation next door to the famous Agora Theatre and Ballroom.

During our inaugural visit, Umami Moto was offering an abbreviated menu, essentially only three starters (Viet-style meatballs, potstickers and cold kimchi) and three entrees (sesame noodle, Korean burrito and fish tacos).  It’s a far cry from the full repertoire of menu items mentioned on the truck’s Facebook page.  Still, the promise of “the basis of deliciousness” literally had our mouths watering.  So did the alluring aromas emanating from the parked vehicle.

In February, 2013, Michelle Obama tweeted her recipe for kimchi, bringing a lot of attention to the spicy fermented cabbage.  Making kimchi is a time-consuming and laborious process, even for Koreans who have been making it for generations, yet the former first lady’s recipe seemed about as difficult to make as a salad.  It’s a good starting point for anyone wanting to try one of Korea’s national dishes.  The version served by Umami Moto is certainly more complex.  Its range of flavors and aromas–piquant, pungent, sour, tangy and sweet–place it squarely in the category of umami.  Its intense garlicky flavor and prominent sour notes place it in rarefied air.  This is a great kimchi!

Thankfully (so I can have it all), my Kim eschews kimchi altogether, a fact that’s hard to reconcile considering she eats garlic as if trying to ward off a village of vampires.  Her starter of choice were Umami Moto’s pork potstickers.  These aren’t the pleated crescent moon-shaped potstickers we’re accustomed to…or perhaps they’re “smooshed down” versions of the more elongated ones we typically enjoy.  Irrespective of shape, these were absolutely delicious one-bite-sized morsels of juicy pork that didn’t need any type of dipping sauce.

Noodles have a traditional and historic role in the Chinese diet, dating as far back as the Han Dynasty of 206 B.C. Many Chinese dishes call for the use of sesame oil.   Cold noodles are often splashed with this oil prior to serving, a practice that may have been the genesis of sesame noodles.  Variations of the dish called sesame noodles are plentiful.  Umami Moto’s version is made with wheat noodles tossed with cucumber, carrots and daikon then drizzled with a sesame dressing and punctuated with edamame and sesame seeds.  While the menu offers this dish with shrimp, my Kim asked to substitute bulgogi for the shrimp.  This was a genius move, elevating what would have been a superb dish into something nearly transformative.   This is a dish best served cold and best served by Umami Moto!

The promise of a fantastic fusion of New Mexican and Korean ingredients drew me to the Korean Burrito (bulgogi beef, napa kochu-queso, onion, carrot, daikon, cilantro on a flour tortilla) which is available extra hot.  There were two…make that three, huge surprises about this dish that blew me away.  First, the conventional train of thought is that Asians don’t eat dairy, especially cheese.  Forget that notion!  According to Kimchi: The Korean Food Journal, “Korea is the fifth largest importer of American dairy and growing. It consumes so much cheese, it affects U.S. dairy prices.”   We hadn’t expected queso on a Korean burrito, but found it absolutely belongs.

The second surprise is that the bulgogi beef was not the more commonly used top sirloin, rib eye or beef tenderloin sliced into strips, but hamburger.  It worked surprisingly well and was an excellent vehicle for the bulgogi marinade (surprise number three).  Bulgogi in this town ranges from sweet to nearly cloying, a true meat candy.  Umami Moto’s version is wholly different.  It’s got sweet notes, but it’s got more complexity than any bulgogi we’ve had in New Mexico.  Its flavor profile runs the gamut–slightly salty, mildly sweet and nutty savory.  It’s tender, juicy and magical, a standard-bearer.  The Korean burrito is roughly the size of a piece of firewood, but it’s so good you’ll probably finish it and want more.

Cleveland’s loss is most definitely Albuquerque’s gain.  Mobile kitchens had better step up their game because Umami Moto is here to win you over with umami-kissed food that’ll surprise and delight you.