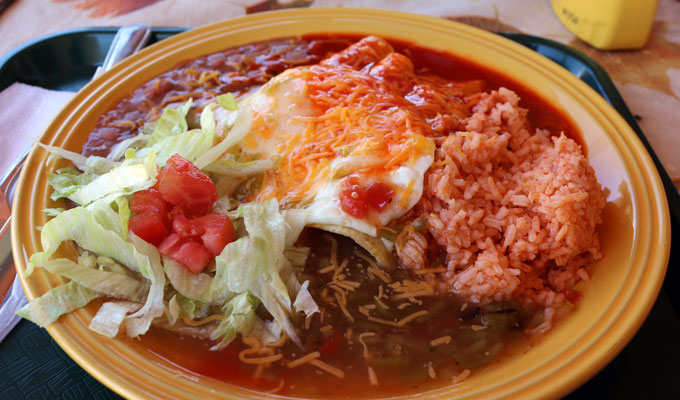 Apple trees have had a bad rap ever since a conniving serpent (probably a lawyer or politician in disguise) in a verdant paradise beguiled Eve into taking a bite of the fruit of the “tree of the knowledge of good and evil.” Never mind that Genesis does not specifically mention an apple as having been the forbidden fruit, for some reason (perhaps collusion among grape growers), religious art has always depicted the apple as the one fruit God prohibited Adam and Eve from touching or eating “lest you die.” The apple tree’s nefarious reputation took another nasty hit when an orchard of apple trees hurled fruity missiles at Dorothy and her friends as they made their way to Oz. Dorothy was just trying to follow the edict “an apple a day keeps the doctor (or the wicked witch of the west) away.”

Today, temptation is still synonymous with the apple tree, particularly in Corrales where generations of New Mexicans converge every year to get their chile fix at Wagner Farms. Few can resist the alluring siren’s call of chiles being roasted, their tender flesh hissing and spitting as they blacken as their alluring aroma perfumes the air. Like Eve succumbing to the wiles of the serpent, many of us also can’t resist the lure of the Apple Tree Café adjacent to the farm store. It’s a temptation so strong, we walk briskly past bins showcasing crisp, fresh vegetables and fruits. We fidget and fuss if we have to stand in line to place our orders at the counter then we count the minutes until we’re summoned back to that counter to pick up our bounty of deliciousness.

Long queues are not atypical at the Apple Tree where ardent aficionados line up for a New Mexican breakfast or lunch fix. In fact, the number of hungry diners queuing up at the cash-only counter is often longer than the number of items on the menu. While the menu may be small, flavors and aromas emanating from the tiny kitchen are not. Alas, you can sate your appetite at the Apple Tree Cafe only during chile roasting season, a seasonal event that (sometimes) ranges from as early as mid-July through mid-November depending on the harvest (though the breakfast burritos are available at the Corrales Growers Market on Sundays). Breakfast–essentially two burritos and huevos rancheros–is available all day. Savvy diners traverse highways and byways to have one of the Cafe’s behemoth breakfast burritos.

That became evident in the summer of 2014 when the New Mexico Tourism Department invited New Mexicans to nominate and vote for their favorite purveyors of breakfast burritos. Nearly 50,000 votes were cast for the 400 restaurants nominated for inclusion in the New Mexico True Breakfast Burrito Byway. Katrinah’s East Mountain Grill in Edgewood garnered the most votes with 2,623 tallies. The Apple Tree Café placed second with 1,907 votes. The fact that the restaurants earning the most votes were from small towns speaks volumes about New Mexico’s oft quirky voting preferences.

In her novelty hit popular music singer Rosemary Clooney invited listeners to “try an enchilada with da fish a bac a lab and then a…” While the lyrics may confound listeners, New Mexicans love enchiladas and would probably try them with “da fish a bac a lab” if only we could figure out exactly what that means. Generally we like our enchiladas made in the traditional way. More often than not in Northern New Mexico, that means flat, not rolled. At the Apple Tree Cafe, enchiladas are rolled, but you get three of them on a plate along with your choice of red or green chile (if for no other reason but to sample them both, ask for “Christmas”). Available with either chicken or beef (shredded), the enchiladas go best with a fried egg over-easy on top and are served with beans and rice. The beans are terrific, but the Spanish rice is about as boring as every other Spanish rice dish in New Mexico. We enjoyed the green chile quite a bit more than we did the red though neither is especially piquant.

Several postprandial delights await though you’ll probably take them home for later consumption because of the Cafe’s generous portions. Make one of them the blueberry-lemon cake, a brick-sized cake featuring two fruits with varying degrees of tanginess. Spongy freshness and moistness are hallmarks of this terrific cake. We weren’t quite as enamored of the apple turnover which wasn’t nearly as flaky or fruit-filled as similar offerings at local bakeries. Other desserts include homemade apple pie, peach cobbler and ice cream as well as caramel apples as teasingly tempting as they can be.

Temptations abound at the Apple Tree Cafe, but unless you’re dietetically depriving yourself of New Mexican food deliciousness, you need not ever feel guilty about succumbing to the allure of culinary favorites blessed by the incomparable flavors and aromas of chile.