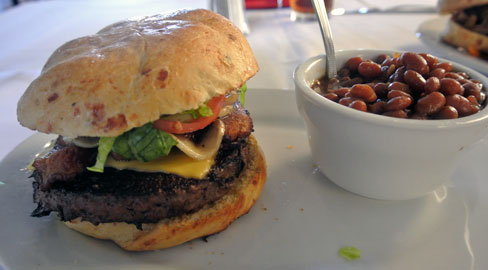 Big Bang Theory wunderkind Sheldon Cooper has a spot he describes as the “singular location in space around which revolves my entire universe.” That spot is the left side of his couch, a location he has placed “in a state of eternal dibs.” In scientific terms, Sheldon relates his spot as “a single point of consistency in an ever-changing world.” His attachment to that one spot borders on obsession, but he’s not the only television character that possessive of his spot.

In television comedies, characters have always had their favorite spots and show little tolerance for anybody who tries to sit in them. Cheers barflies Norm Peterson and Cliff Claivin had their favorite bar stools. Jerry Seinfeld, George Costanza and Cosmo Kramer always sat at their favorite table at Monk’s Diner. Heaven help anyone who sat on Archie Bunker’s favorite chair, the most famous and only one of the aforementioned spots on display at the Smithsonian Museum of American History in Washington, D.C.

Television personalities are often based on and mimic real life characters. As such, it will be interesting to see what Corrales resident will develop an attachment to a favorite spot at its newest eatery (as of May, 2014), fittingly named The Spot. That’s an appropriate appellation for a cafe which promises to be a very popular gathering spot in the heart of the village. The Spot opened its doors in May, 2014 and is open for breakfast and lunch every day but Tuesday from 7AM until 3PM.

The Spot occupies the spot previously held by the Oasis Cafe within the Village Plaza, an 11,000 square-foot complex just north of the Corrales fire station. At the help are Aaron and Deb Worrell, veteran restaurateurs with more than two decades in the industry. In addition to The Spot, the couple own and operate two Aaron’s Sandwich Time restaurants in the Duke City. It goes without saying, therefore, that sandwiches are part and parcel of the cafe’s menu.

Interestingly, the cafe’s ambiance bespeaks fine dining with linen tablecloths, cloth napkins and table service but the menu is more akin to an over-the-counter operation with an emphasis on contemporary comfort food at great prices. It’s an inviting menu both during breakfast and lunch. Start the morning off with build-your-own omelets, panini-stuffed French toast, breakfast sandwiches and a nice line-up of breakfast burritos. Sandwiches and burgers highlight the lunch menu, but no ordinary burgers are these. A one-half pound Angus beef burger is available with your choice of toppings and is prepared to your exacting specifications.

Reason enough to visit The Spot are the housemade milk shakes made from Blue Bell ice cream, arguably the best ice cream in America. When we moved from Mississippi to Albuquerque, Blue Bell ice cream was what we missed most–even more than blackened redfish and oysters. The Spot’s milk shakes remind us why. The Dutch Chocolate milk shake is rich and creamy with an adult dark chocolate flavor and a decadent fudge swirl. The Spot offers a number of different Blue Bell flavors, all on display in a freezer. You’ll want to try them all.

10 May 2014: Over the years, my friends and I have, like Indiana Jones in pursuit of historical treasure, trekked throughout the city in pursuit of the best green chile Philly. Only a handful (the very best being from Itsa Italian Ice) meet our exceedingly high standards. The Spot’s green chile steak melt ranks right up there with them. It’s a sandwich Philadelphia would be proud to call its own. This gem of a sandwich is constructed from very high quality ingredients: tri-tip steak, a full-flavored, low fat content cut of steak; red, green and yellow peppers; caramelized onions and plenty of New Mexico green chile on your choice of bun (including one impregnated with green chile).

10 May 2014: Half-pound Angus burgers, with your choice of toppings, are sure to please the most discerning of burgerphiles. The list of toppings options truly allows you to have it your way. My way was with green chile, bacon and cheese along with the standard toppings of lettuce and tomato. Not surprisingly, the Angus beef patty is very flavorful courtesy of nicely marbled beef prepared at a juicy medium. Served on a green chile bun, this burger warrants further exploration with different toppings. It’s a good one.

10 May 2014: Sandwiches and burgers are available with a number of sides including sweet potato fries and baked beans. The baked beans are terrific, so good I wiped them out before even trying the burger. Unlike far too many baked beans, these are not candy cloying, but have a depth of flavors that’s very enjoyable and which might transport you to memories of barbecues. The sweet potato fries are also quite good.

13 July 2014: When my friend Larry McGoldrick, the professor with the perspicacious palate, declared The Spot’s biscuits and gravy “the best I have ever had. Anyplace. Perfection,” it created a dilemma for me. Biscuits and gravy border on traumatizing, the result of having been subjected in Air Force cafeterias to absolutely horrible renditions of this popular Southern breakfast staple. On the other hand, when Larry is as passionate about a dish as he is The Spot’s biscuits and gravy, you’re well advised to try it…and soon.

13 July 2014: Biscuits and gravy combine various textures and flavors into each bite, making it a deliciously diverse, palate pleasing breakfast entree. Crumbled sausage links enliven the flavor of a tasty milk, flour and butter-based gravy served over three split biscuits topped with two eggs made the way you want them. The fluffy, steamy interior of the split biscuits coupled with the sturdy biscuit exterior are a perfect repository for the smooth, delicious body of the sausage gravy. The eggs (Larry likes them over-easy) blanket the biscuits and provide runny yoke deliciousness. This dish is served on a “too hot to handle” skillet.

13 July 2014: While the standard breakfast menu includes waffles, there’s just something special about the combination of chicken and waffles. It’s a combination which has become increasingly popular in the Food Network age. Several Duke City restaurants serve fairly standard versions. The Spot stands out for its unique take on this Belgian culinary specialty. To truly appreciate this entree, available with or without bones, ask for the honey-BBQ glaze instead of the standard waffle syrup. The honey-BBQ glaze is reminiscent of sauces used on Asian dishes–not the sweet and sour type of sauce, but the sauces which impart proportionate measures of sweet, savory and tart flavors. It’s probably not everybody’s cup of sauce, but adventurous types will enjoy it. The chicken itself is perfectly fried with a golden crust.

In time, The Spot Cafe promises an even more inviting menu, one replete with comfort food favorites diners will appreciate. This is a restaurant which just might become your spot.