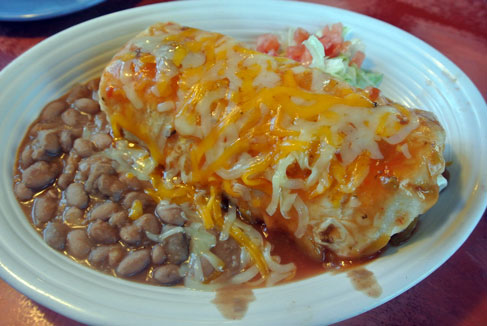 It’s interesting that the New Mexico State Constitution bars “idiots” and “insane persons” from voting, but quips about votes being cast by dead people, family pets and farm animals have been pervasive over the years in some counties and municipalities. In some of the same counties and municipalities, the saying “vote early and vote often” has seemed more a way of life than an aphorism. Not all citizens of the Land of Enchantment exercise their right to vote, but some, it seems, exercise it vigorously…and often.

Perhaps realizing the enthusiasm some New Mexicans have for the right to vote, the New Mexico Tourism Department allowed them to cast their vote daily for their favorite breakfast burrito in the statewide Breakfast Burrito Byway contest and tourism initiative. Voters cast some 46,766 votes for their favorites among 400 nominated restaurants. The top fifty vote-getters became “founding members” of the inaugural Byway. Katrinah’s East Mountain Grill in Edgewood garnered the most votes, tallying 2,623 votes (not quite one vote per resident in the community of 3,379 souls).

In a “get the vote out” campaign utilizing Facebook, whiteboards and the ever-effective personal touch, Katrinah’s proved that in New Mexico the popular vote still counts (often more than once) and small communities do have a voice. In the case of Katrinah’s, it’s a very active and powerful voice that drowned out the behemoth burrito-making bullies on the block in Albuquerque and Santa Fe. It’s a voice that garnered more support than breakfast burrito assembling megaliths such as Lotaburger, Twisters and The Flying Star.

Quite unlike many other election results in New Mexico which generally end up with voter dissatisfaction or antipathy, the result of the Breakfast Burrito Byway voting was viewed by many with curiosity and a sense of adventure. How far away is Edgewood? How do we get there? New Mexicans may not always be willing to drive ten blocks to cast a vote, but we’ll drive tremendous distances for a great breakfast burrito just as we would for a great green chile cheeseburger.

Since it was announced that Katrinah’s breakfast burrito reigns supreme in the Land of Enchantment, visits to the small strip-mall eatery have increased significantly. Initially Katrinah’s was “slammed” with out-of-town and even out-of-state diners and while the hullabaloo has slowed just a bit, first-timers area an almost daily occurrence. Shame on New Mexicans who believe they’re in Texas the second they cross the Sandias going east; they can get to Katrinah’s in under half an hour from the Big I. It’s well worth the drive!

Even if you weren’t visiting Katrinah’s for the breakfast burrito, the menu has a number of intriguing offerings which will warrant return visits. The “Thunder Burger” (triple battered deep fried 1/2 lb burger with green chile and Cheddar), for example, sounds too good not to return, arteries be damned. The fried green beans with your choice of housemade dressing are worth a return trip on their own, especially if you opt for the green chile ranch dressing. These fried green beans will make a convert out of anyone who thinks they don’t like green beans. They’re lightly battered, crispy and have the snap of freshness when you bite into them.

The breakfast burrito is a beauteous behemoth, bulging at its seams with fluffy eggs and cubed potatoes then topped with shredded yellow and white Cheddar cheeses and your choice of red or green chile (or even Texas “chili” if you’re so inclined). Cumin is used in the preparation of both the red chile and the Texas chili. The green chile is delicious and since you can’t have enough of a good thing, ask for your burrito to include the housemade green chile sausage, too. The burrito is served with pinto beans, the other official New Mexico state vegetable. This is an excellent breakfast burrito, large enough for two to share, but so good you won’t want to.

Breakfast is served until 2PM. The rest of the menu is available all day long. If you have vegetarian, gluten-free or other dietary concerns, your server will be happy to give you suggestions. A fully-stocked coffee bar features Starbucks coffee or espresso. Desserts include fountain-style shakes and malts, baked goods and ice cream treats. The cinnamon rolls are so generously iced that it surprised me when my convivial server offered to slather it with melted butter. That would have been a bit too rich and cloying for my tastes.

What’s surprising about Katrinah’s East Mountain Grill is not that it garnered more votes than any other purveyor of excellent breakfast burritos in New Mexico. What’s surprising is that if it hadn’t been for New Mexico voters, many of us might never have heard of Katrinah’s.