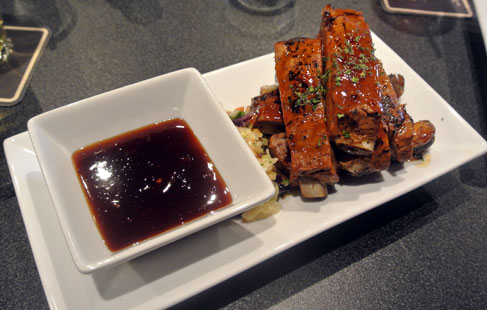 Cultural anthropologists (and Barbara Streisand) have long posited that throughout evolutionary history, man has had an inherent need for belonging to a social group. We are driven to form and maintain at least a few lasting, positive and significant interpersonal relationships. For many men, one of the most powerful bonding agents is sports. We derive a sense of belonging through our affiliation with the sports teams we like–to the extent that we wear team apparel which encases us like engorged sausages. We like to get together to cheer our teams and express our contempt and ridicule for teams we dislike (think UNLV Rutting Rebels and other miscreants of that ilk).

Our man cave away from home is the ubiquitous sports bar. It’s our refuge from the interminable “honey do’s” our significant others don’t remember until five minutes before kick-off. It’s our sanctuary where, like a pride of male lions, we can kick back, tell a few lies and be waited upon as we enjoy our favorite team (everyone’s a Lobo! woof, woof, woof) conquer a hapless foe. Nothing makes a man cave more appealing than copious quantities of food and televisions the size of drive-in movie screens. For many Duke City residents who sport the XY-chromosome pairing, Gioco Sports Bar has become the man cave of which used to only dream.

Boasting a 130-inch television and fifteen “smaller” televisions (most larger than a Smart car), it’s a man cave in tribal proportion, accommodating more than 100 avid sports fans (spelling bee watchers need not visit). The menu is replete with such man favorite entrees as artisinal pizza, pressed panini sandwiches, nachos and chicken wings, all of which are baked (nothing on the premises is fried save for some of the patrons). Adult beverages flow freely. It’s no wonder sports fans plant their gluts on a chair as soon as Gioco opens and remain until closing time, standing only when nature calls or the visually impaired officials blow a call against our team. Look for some Duke City sports fans to try homesteading at Giaco soon.

Gioco opened its doors on September 1st, preceding the National Football League’s 2014 kickoff by a week. Translating from Italian to “game,” Gioco is the brainchild of the good folks who brought us O’Niell’s, a popular venue despite the fact that 130-inch televisions don’t grace its walls. Gioco, in fact, occupies the space next door to O’Niell’s on Central Avenue, sitting on an adjacent 3,000-square-foot space that used to be O’Niell’s special events area.

Whether you enter through the Central Avenue door or through the rear entrance by the capacious parking lot, the minute you walk in your eyes will be captured by the sheer masculinity of the venue. Only when Chuck Norris dines alone will there be so much testosterone in one place. Dark colors and subdued lighting are punctuated by televisions with sports on every channel. The menu is pretty manly, too, even though it lists five salads (albeit loaded with meats and cheeses).

Manly sports fans will love the descriptions behind every menu item. The stuffed mushrooms, for example, are described thusly: “Not since Wilt denied Kareem twice has anything been so righteously stuffed, with cream feta and Parmesan.” Some of us who can’t recite the preamble (or don’t know what a preamble is) to the Constitution of the United States can tell you exactly why The Italian sandwich description reads “Joe DiMaggio would order 56 of these.” Sports trivia is something at which we excel.

There are more appetizers (ten) on the menu than there are of anything else. If so inclined, we can order two or three…or ten appetizers and call it lunch. Among the more intriguing starters are the Korean Pork Ribs (described as “We’ve used our most flavorful Taekwondo to attack these ribs. Now shiu! At ease! Enjoy your half rack.”). They don’t resemble any Korean pork ribs I’ve ever had (perhaps they were adopted). As with several similar starters offered throughout the Duke City, these ribs were almost cloying with a lacquered on sauce. Their sole redeeming quality is how meaty they are.

Pizza, which occupies the top of the manly sports fan food pyramid, is among the featured fare at Gioco. Never mind that it’s “artisinal” pizza, it’s still pretty darned good. Better still, you can customize it the way you want it. If you want half of one of the menu’s standard pizzas on one side and half of another pizza on the other side, tell your server and it’ll be done. Each pizza is about ten-inches around, not one of those puny “personal pan” sized pizzas which leave you hungry. The menu describes the crust very well: Our Sweet Spot crust hammers it home by finding the sweet spot of thickness, keeping it light while keeping the bite.” It is indeed a very good crust.

The crust is a perfect canvas for the “have it my way” custom pizza I ordered. The Salumeria (pepperoni, Genoa salami, spicy capicola, Parmesan and Mozzarella with a classic pizza sauce) occupied half the pizza. The other half was pepperoni and green chile. This is a perfect combination! Not unexpectedly considering the salted cured meats from which it is constructed, the Salumeria is a bit on the salty side, but those meats (especially the spicy capicola) are plentiful and they’re macho meats. Alas, the green chile was a bit on the insipid (like Eli Manning) side, lacking the eye-watering, tongue-blistering heat men (at least New Mexican men) love.

Though not a sports fan (save for a drive-by interest in the Chicago Bears…when they’re winning), my Kim didn’t feel completely out of place at Gioco though she didn’t understand why our server wouldn’t change the channel to the Food Network (isn’t Iron Chef a sport?). We were both lamenting the fact that we hadn’t had a good pizza in four months (not even in California) so she ignored all the football games on the televisions. Her “build your own” pizza was constructed with a garlic oil sauce, sausage and cheese. It was a bit rich for me and the garlic sauce was powerful enough to ward off a family of vampires (or any amorous prospects), but it just right for her.

There are only three desserts on the menu, none made on the premises. Frankly, most manly sports fans would just as soon have chicken wings and call them dessert. The Limoncello cake is probably the least sweet among the three desserts, offering tangy (albeit not lip-puckering) notes to offset the sweetness. After one bite I cursed myself for not having ordered the nachos instead.

As a purveyor of pizza, Gioco is a people-pleasing place. As a man cave, it may have no equal in the Duke City.