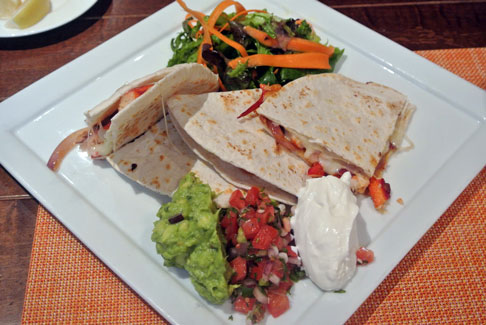 As you gaze in awe and wonder at the luxurious trappings surrounding you everywhere you turn at the Rosewood Inn of the Anasazi, you can’t help but contemplate the irony. Inn of the Anasazi? Throughout their existence the Anasazi never knew luxury or leisure, focusing solely and at all times on survival. Shelter, food and water were of paramount concern in the Four Corners area of the Southwest, a desolate environment which was often brutal and unforgiving. Amidst the ravages of climatic extremes, the Anasazi scratched out an existence and an lasting legacy.

While the subsistence living of the Anasazi civilization and the opulence of the Rosewood Inn of the Anasazi are at polar extremes, even stodgy historians might appreciate that this intimate world-class retreat “celebrates the enduring creative spirit and traditions of the regions early Native American.” This boutique gem also embraces Santa Fe’s rich cultural heritage and ongoing legacy as an artist colony. An extensive art collection is a vivid blend of Native, Hispanic and Anglo influences.

In the Anasazi Restaurant and Bar luxury travelers have a restaurant worthy of the stunning three-story Inn. Richly appointed with the tricultural art of New Mexico, the restaurant is decidedly rich, tasteful and masculine in its furnishings. Meals are as artistic as the ambiance with a healthful salute to the rich bounty of New Mexico’s farms from where fresh produce is sourced at the Santa Fe Farmer’s Market. Through a Santa Fe purveyor, the Anasazi procures elk from the Rocky Mountains and lamb from northern New Mexico. The quality is very much in evidence.

In Matthew 4:4, Jesus declared “It is written, man shall not live by bread alone.” For the most part, this man wouldn’t want to, but some breads are so good, it might be tempting to try. The bread at the Anasazi is among the best offered at any restaurant in Santa Fe. Fresh, yeasty baguettes and a red chile impregnated lavosh offer textural and flavor contrasts. Both are so good you’ll be tempted to order a second bread basket though you’d risk filling up on bread alone.

Contrary to what some restaurants might have you believe, bottled Caesar salad dressing does not a true Caesar salad make. There’s a richness of embarrassment propagated against the dining public when this “faux” Caesar is offered. The Anasazi prepares, albeit not table-side, a true Caesar salad then it takes a few liberties with the ingredients and calls it a “South of the Border Caesar Salad.” There’s just a bit of irony there because the salad’s “inventor” Caesar Cardini actually created the very first Caesar salad in Tijuana, Mexico on July 4th 1924.

The South of the Border Caesar Salad is everything there is to like about the Caesar salad and more. It’s constructed with Romaine lettuce, tapioca green chile croutons, crispy Serrano ham and a lemon-anchovy dressing with a white anchovy thrown in for good measure. Every ingredient on this salad is first rate. The crispy Serrano ham is as thin as carpaccio and as crispy as a potato chip with the unmistakably wonderful flavor of cured, salted pork. The tapioca green chile crouton has an almost doughy texture and appearance, but inside it you’ll discern the irresistible flavor of roasted chile. The lemon-anchovy dressing is as good as we’ve ever had.

Even though the quality of seafood–some shipped daily to New Mexico’s restaurants–has improved greatly over the years, all too often we’re reminded that one of the few enchantments with which we’re not blessed is proximity to the ocean. That’s often the case even at high-end fine-dining establishments such as the Anasazi. A lobster quesadilla would not have cut it in Maine; it shouldn’t cut it in New Mexico either.

Even though our quesadillas were brimming with prized knuckle and claw meat (as well as Asadero cheese, chipotle mayonnaise and mango dressing), the lobster was chewy (typically a sign it’s been overcooked). Served with the quesadilla were the usual quesadilla suspects: sour cream, pico de gallo and guacamole, none of which would probably be served with lobster in Maine. While we liked the notion of a lobster quesadilla, we found the execution of the concept lacking. To paraphrase Marlon Brando from On The Waterfront, “it could have been a contender.”

Argentina is widely regarded as the beef capital of the world, the domicile of succulent cuts of mouth-watering, premium steaks. One of the favorite preparation styles is Bife Asado, literally grilled beef. At the Anasazi Restaurant, Bife Asado is a flat iron steak grilled to your exacting specifications (medium-rare is just about perfect), sliced into half-inch slices and served with fingerling potatoes, calabacitas and usually a Serrano chile Chimichurri sauce which my Kim rebuked because one of its ingredients is cumin in favor of a mango salsa.

Flat iron steaks are a value-priced cut that is tender, juicy and which some experts say has the “beefiest” flavor of any cut of beef on any steak. The Anasazi Restaurant exploits these qualities to their utmost, grilling a fork-tender steak that is juicy, delicious and absolutely beefy. The fingerling potatoes, which include purple Peruvian potatoes, are worthy accompaniment while the mango salsa, though no Chimichurri, is so good you might eat it right out of the ramekin and not use it on the beef.

The Anasazi Restaurant menu claims to “celebrate American cuisine, in particular New Mexico cuisine.” What passes today for “New Mexican cuisine” at the Anasazi would probably be unrecognizable to abuelitas of yesteryear. It would be interesting to study Anasazi’s avant-garde approach to interpreting New Mexican cuisine with my own grandmother, but frankly there are very few dishes on the dinner menu which would pass for anything approaching traditional New Mexican cuisine as she knew it. The duck enchilada mole is hardly traditional.

Fortunately, the menu does offer New Mexico lamb chops, long a staple in Northern New Mexico. My abuelita never prepared lamb chops as tender, meaty and delicious as those found at the Anasazi. My own memories of Northern New Mexican lamb is of a tough, sinewy and gamey meat, albeit one with a delicious grass-fed flavor. We certainly didn’t adorn our lamb chops with anything as rich and deeply-flavorful as the mint demi-glace which flows copiously on the plate. Nor did we ever enjoy broccolini and smashed fingerling potatoes with our lamb. Though my grandmother would probably have found the Anasazi’s preparation heretically inauthentic, she would probably have enjoyed them. We sure did.

Desserts share space on the menu with postprandial digestifs (alcoholic beverage served after a meal, in theory to aid digestion) such as cognac, brandy, grappa and sherry. The Anasazi Restaurant, by the way, boasts a Wine Spectator award-winning wine list and in 2013, was named by Wine Enthusiast as one of America’s 100 best wine restaurants in recognition of its 300 bottles of Old and New World wines. Those wines form the backdrop for private candlelight dinners at the restaurant’s intimate wine cellar which accommodates up to twelve guests.

A housemade daily selection of sorbets or ice creams may seem somewhat pedestrian compared with the other sophisticated desserts offerings on the menu, but when made well you can’t beat a good ice cream. At Anasazi, you’ll get three scoops per order, a tantalizing triumvirate of cold deliciousness served atop fruit (watermelon, honeydew, cantaloupe) pieces. By happenstance, the flavors of the day during one unseasonably warm October day were vanilla, dulce de leche and chocolate. The dulce de leche, which translates literally from the Spanish as “sweet of milk,” has a wonderful caramel-like flavor while the chocolate is intensely chocolate, boasting the adult chocolate flavor aficionados love.

In a city replete with posh, elegant and refined lodging and dining opportunities, the spectacular Anasazi Restaurant at the Rosewood Inn of the Anasazi is among the most highly regarded.