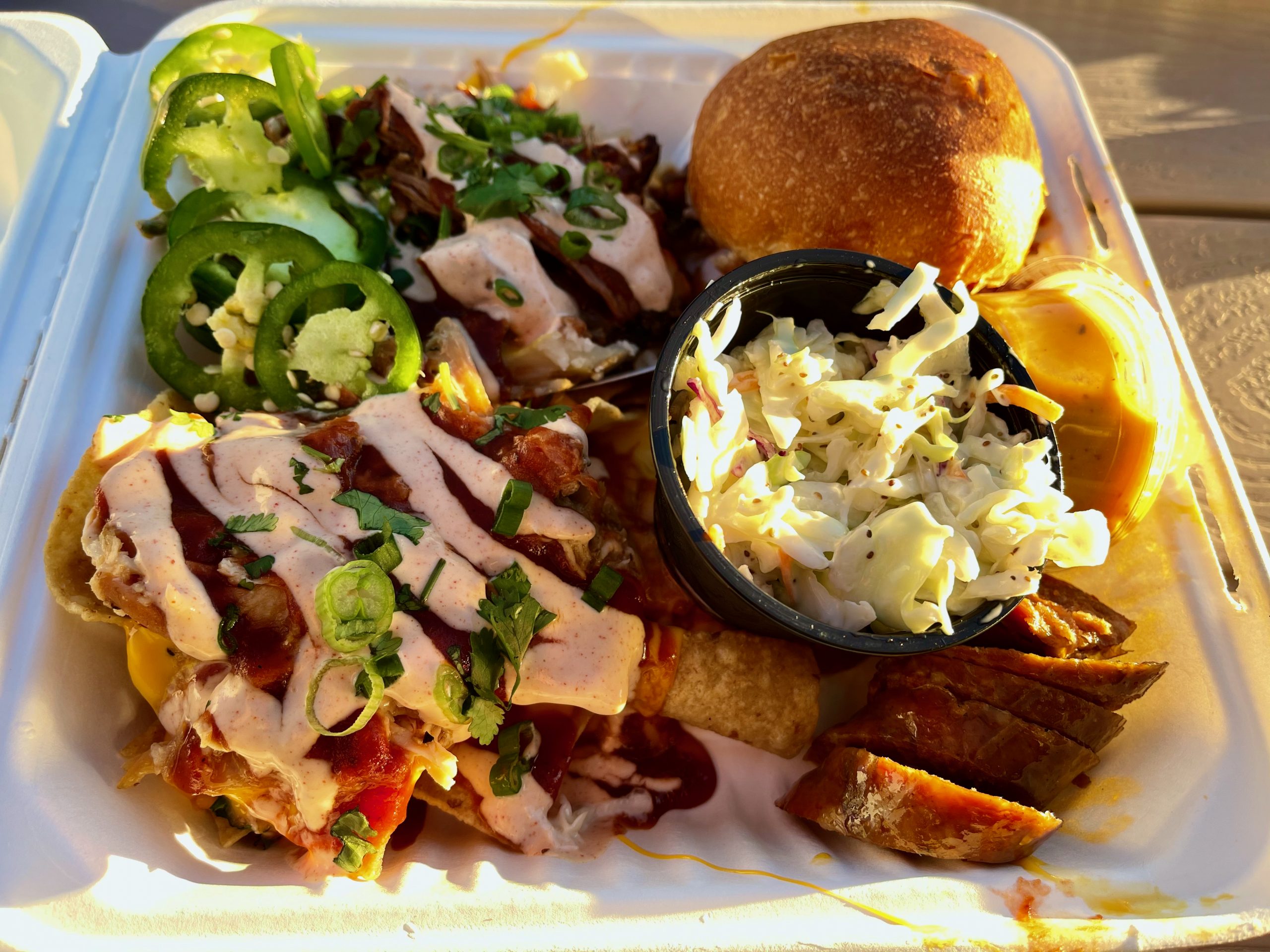 London-based restaurant critic Jay Rayner makes barbecue sound a bit like a scientific process: “the long, virtuous interplay of fire, smoke and time on cow and pig muscle fibre; who sees only joyous caramelisation and the deep flavours gifted by the Maillard reaction, when heat says hello to amino acids and natural sugars and they all get along famously.”  He’s actually quite right, but most of us got enough chemistry formulas in high school.   We recognize that at its most basic, the formula for barbecue is expressed much more simply: meat plus smoke plus time plus (or minus) sauce equals delicious bliss.

Okay, my formula only sounds simple.  Mastering the art and science of “low and slow” actually takes a long time and extensive practice, often fraught with trial and error at the expense of ruined meats.  Speaking from personal experience, not all of us have the patience or aptitude to smoke meats people actually want to eat much less to become pit masters.  It’s a true trial by fire that shouldn’t be undertaken by the faint of heart or devoid of talent.  Survey the Duke City barbecue scene and you might conclude that baptisms by fire and smoke hasn’t exactly churned out a phalanx of talented pit masters.

My friend  Howie “the Duke of the Duke City” Kaibel, Community Director for Yelp laments that “historically, barbecue has miserably failed to impress in Albuquerque. The best I’ve ever had has come out of food trucks and Texas franchises.”   So, when he raved about a barbecue joint that “cooks up the real deal and smothers everything in sauces and nacho cheese and cold red cabbage so good you’ll be lickin’ all of your digits,” we had to check it out.  The barbecue joint of which he waxed eloquent is S-A BBQ, a concession stand-sized purveyor of smoked meats at Albuquerque’s two food courts made from repurposed shipping containers–Green Jeans Farmery and Tin Can Alley.

S-A BBQ’s website is an enticing invitation, apprising guests that “Our barbecue is smoked out low and slow. New Mexico-style BBQ means we pay tribute to traditional barbecue styles — but done our way. Our ABQ BBQ menu is lean and focused. Just a few items, all smoked to perfection. Our housemade sauces and spice rubs aren’t like anything you’ll find anywhere else. They’re made from true NM ingredients, blended to balance out the smokiness of the meat, and to add as much kick as you want. We offer a focused menu specializing in a few good meats: brisket, pulled pork, chicken, and hot links.”

S-A BBQ was founded by two highly credentialed guys. The “S”in the joint’s name stands for Leo Savedra, the “A” for Gabriel Amador. Duke City foodies are already familiar with Gabriel Amador, owner of Amore Pizzeria, New Mexico’s only certified authentic Neapolitan pizzeria. You might not know Leo Savendra, but you’ll certainly appreciate his talents as beautifully described on the website: “Leo has been smoking meats for longer than Jesse Pinkman’s been alive. Before S-A, he owned a smoking truck here in ABQ called All Smoked Out. Leo was a butcher for a combined 18 years at Nelson’s Meats and Smith’s.”  Together Gabriel and Leo “break the rules just enough to introduce new flavors and a new experience.”  Their philosophy is to “respect the tradition you come from, but make it your own.”

Making barbecue their own is certainly what they’ve done.  S-A BBQ is unlike any barbecue in the Duke City, both from experiential and flavor standpoints.  Befitting the diminutive digs, you’ve got to admire how successful they are in presenting the “few good meats: brisket, pulled pork, chicken, and hot links” touted on the website.  And they don’t just heap each one between buns, slather on some sauce then serve them to you in the usual manner.  The menu features sliders–and not the three-bite miniatures with which you’re familiar.  The sliders are as big as full-sized sandwiches at other places.  One of the specialties of the house is the S-A BBQ Fiesta Bowl, a bowl of chips with your choice of smoked meat, smothered in Cheddar, bbq sauce, red chile crema, chives, and jalapeños.  The menu also showcases papas, a “big ol’ papa smoked in our smoker till tender and soft, then covered in your choice of protein, with cheese, butter, chives, BBQ sauce, and red chile crema.”  Sides and drinks are also noteworthy.

If you’re not sure what to order, do what Howie and I did and order it all.  For only fifteen bucks, order the Big Smoked Out Plate  which has a little of everything–and by “everything” that means: a chicken fiesta bowl, half brisket spud, pulled pork slider, sliced S-A hot link, and slaw.  It’s as if S-A designed the plate just for guys like Howie and me who literally have lust in our hearts for all things barbecue.  The Styrofoam container literally strains at the weight of the five item smorgasbord.  Not all of it is good.  Most of it is great!

As one of those rare people imbued with the heterogametic chromosomal pairing who likes baked potatoes more than steak, I especially loved the half-brisket spud.  As advertised, the papa was tender and soft.  Topped with cheese, butter, chives, BBQ sauce, and red chile crema, it’s constructed just the way I love it–lots of stuff but not so much that it overwhelms the potato.  The chicken fiesta bowl is a sort of barbecue version of Frito pie but better (and it’s never easy for me to say I prefer barbecue sauce over red chile).  Like so many XY-chromosome paired diners, seeing sliders on the menu is an invitation to order at least a half-dozen or more. Do that at S-A Barbecue and you won’t need to eat for a week.  The brisket slider is a handful–brioche buns overstuffed with brisket sauced lightly–and big on the flavor component, too.  The hot links were of Texas quality–slightly spicy and thoroughly delicious.   The only item on the Big Smoked Out Plate we considered only “good” was the coleslaw, a tangy tangle of cabbage.  Now, it wasn’t bad.  It just wasn’t as good as the meaty stuff.  Besides that who goes to a barbecue joint for coleslaw?

S-A Barbecue has mastered the art and science of low-and-slow, serving some of the best barbecue in New Mexico in two locations, one of which is bound to be convenient no matter where you live.