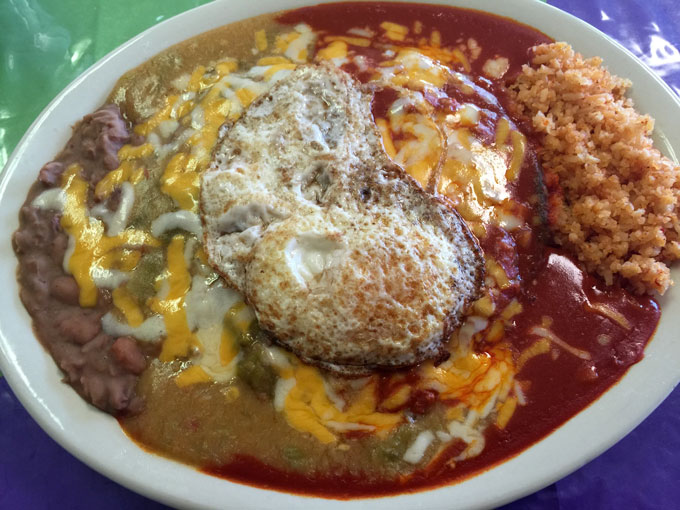 The term “red or green” has connotations beyond New Mexico’s sacrosanct chile. For restaurateurs across the Duke City, red or green can spell the difference between a good or bad reputation and even success or failure. All food service establishments across the city must display the results of the most recent restaurant inspection conducted by the Albuquerque Environmental Health Department. Those results are displayed on a “current grade” sticker in a visible inspection, typically the front door. Savvy diners look for a green sticker which signifies that a food establishment received a passing grade at their most recent inspection. It means the restaurant staff has demonstrated skills and knowledge that create a safe and sanitary food service environment.

A red sticker, on the other hand, means the food service establishment has been downgraded for non-compliance with the Food Sanitation Ordinance. The dreaded red sticker can be the proverbial kiss of death. Although food service establishments are given the opportunity to correct critical violations, sometimes the damage to reputation is done. For years, the “red or green report” was a weekly staple of KOAT Action 7 News with appropriate dramatic emphasis accorded restaurants earning red stickers. As with inspections of any type, restaurateurs who strive consciously to maintain a safe and sanitary food service environment look forward to proving their mettle.

Despite my years of reviewing restaurants I’d never actually witnessed a restaurant inspection until my inaugural visit at Pana’s Cafe. It was the cafe’s first inspection. Inspector Rosanna Trujillo was the consummate professional, providing constructive feedback, dispensing praise, imparting training and providing helpful tips as warranted. She was the antithesis of any negative perception about restaurant inspectors you may have. When she completed her inspection–no violations–owners Joe and Michelle Repichowski were so proud they immediately posted a photo of the inspection results on their Facebook page. That’s not something you see many restaurants do. Then again, Pana’s Cafe isn’t like many other restaurants.

Pana’s Cafe is ensconced in the space which previously housed Patricia’s Café and before that Choroni Café. The café is set back from heavily trafficked San Mateo and doesn’t especially stand out visually among the multitude of stores and shops with which it shares space in a timeworn shopping center. Where Pana’s Café does stand out is with the New Mexican fare it serves. It’s New Mexican food with a pedigree. The restaurant is named for Michelle’s mother whose sister Mary has owned and operated the immensely popular Padilla’s Mexican Kitchen for decades. Joe admits Pana’s recipes are essentially the same family recipes which have made Padilla’s beloved in the Duke City.

Unlike the venerable Padilla’s, Pana’s Café isn’t serving to overflow crowds—at least not yet. As with many relatively new mom-and-pop restaurants, sometimes word is slow to get around. Pana’s launched in January, 2016, exactly four days after Patricia’s Café shuttered its doors. Remnants of its previous tenant remain on the walls where the north wall is painted with a mural depicting the Santuario de Chimayo. On the south wall are painted three other murals, each with a New Mexico theme. Pana’s Café is fairly small in an intimate sort of way. The menu is somewhat abbreviated, too, but it’s got many of the traditional New Mexican favorites. Cumin is added only to the carne adovada.

Pana’s is currently open for breakfast and lunch Tuesday through Saturday. Breakfast is served from 8AM through 11AM and lunch is served from 11AM through 3PM. Among the smattering of breakfast items are pancakes, huevos rancheros and breakfast burritos. Lunch plates–which include beans, rice and two sopaipillas—feature such traditional New Mexican favorites as tamales, chile rellenos, enchiladas, tacos, burritos and a phalanx of ala carte items. “This and that” are available in the form of guacamole and chips, salsa and chips, a Frito pie or a hamburger with fries. As you peruse the menu, a bowl of salsa and basket of chips are ferried to your table. The chips are crispy and thick, ready to scoop up as much salsa as you’re able to lay on them. Alas, the salsa is a bit on the thin side and is better for dipping than for scooping. The jalapeno-based salsa has very distinctive flavor notes courtesy of cumin and bay leaves (yes, bay leaves). It’s not especially piquant, but it’s quite good.

16 June 2016: You can have your enchiladas constructed with cheese, ground beef, chicken or carne adovada and on either blue- or yellow-corn tortillas. Regardless of filling you choose, make it an early Christmas and ask for both red and green chile. For good measure ask for at least one fried egg (over easy) on top. The chile is hot! For a fire-eater, it’s not necessarily piquant, but it’s served piping hot, not lukewarm. It’s a very good, earthy chile, unadorned with seasonings that don’t belong on New Mexican food. Both the red and green are about even on the piquancy scale and both are absolutely delicious. The accompanying beans will remind you of those prepared by your abuelita while the Spanish rice is…well, it’s Spanish rice.

12 April 2017: What do you do when a combination plate asks you to select three items from among four choices? You pay a little bit extra for the forth item, of course. Pana’s combination plate offers three choices from among four equally delicious items: a cheese enchilada, tamale, chile relleno and ground beef taco. That’s akin to ask you to pick three of your children to the exclusion of the fourth. You just can’t do it! All four items are exemplars of how they should be prepared. The taco, a crescent-shaped corn tortilla housing well-seasoned ground beef, shredded cheese, lettuce and tomato is excellent, the likely first item you’ll finish. The tamale features features a nice balance between corn masa and chile marinated pork topped with shredded cheese and more of Pana’s addictive chile. Puncture the chile relleno with your fork and it practically oozes molten cheese. Cheese enchiladas are usually pretty boring to me, but not so at Pana’s where the red and green chile enliven the dish. The chile is memorable!

Complimentary sopaipillas are becoming increasingly rare in New Mexican restaurants. Lunch plates at Pana’s include not one, but two of them. They’re large, puffy and fresh with deep pockets beckoning for honey to be poured in. If you’re so inclined, you might also want to stuff your savory entrée into those deep pockets, a sort of stuffed sopaipilla in miniature.

14 April 2017: Every year on Holy Thursday at about 7PM, by brothers would set off on the 25-mile pilgrimage to the Santuario De Chimayo, a torturous walk through winding roads that climb and descend precipitously. They would arrive home the next day thoroughly exhausted–too exhausted, it turned out, to enjoy my mom’s traditional Good Friday lunch of tortas de huevo. That left more for me. Tortas de huevo are a traditional Lenten dish typically served on Fridays when New Mexican Catholics are expected to abstain from meat. Moreover, they’re absolutely delicious. Picture a sort-of egg fritter whipped into a light, fluffy texture and fried then topped with red chile. Five or six of these eggy chile delivery vehicles with pinto beans, quelites, calabasitas and fideos and there’s no way you can bemoan the fact that you didn’t have a single hamburger on a Lenten Friday.

14 April 2017: Every Friday during Lent in 2017, Pana’s served all the aforementioned Lenten treats, preparing them nearly as well as my mom did. The quelites (lamb’s quarters, commonly referred to as wild spinach throughout Northern New Mexico), calabacitas (sautéed zucchini, onions and corn) and fideos (a pasta dish with short spaghetti noodles and a mild tomato sauce) made me wish Lent would last longer than forty days. The fideos rekindled many fond memories. Unlike spaghetti which is seasoned (sometimes heavily) with oregano and garlic, this New Mexican vermicelli noodle dish is lightly seasoned and light on the tomato sauce, too. Pana’s adds a few beans to the quelites, perhaps acknowledging that quelites are an acquired taste. To me, they taste like my mom’s home. The calabasitas are fresh, crisp and addictive.

Joe and Michelle are the consummate hosts. Their customer-orientation became apparent when, despite having an inspector performing a white-glove routine on their café, they were timely to take my order, quick to replenish my beverage and ever present to ensure my dining experience was a good one. Pana’s Café is the type of restaurant you pull for to succeed and not only because of its culinary lineage. It’s a very good New Mexican restaurant.