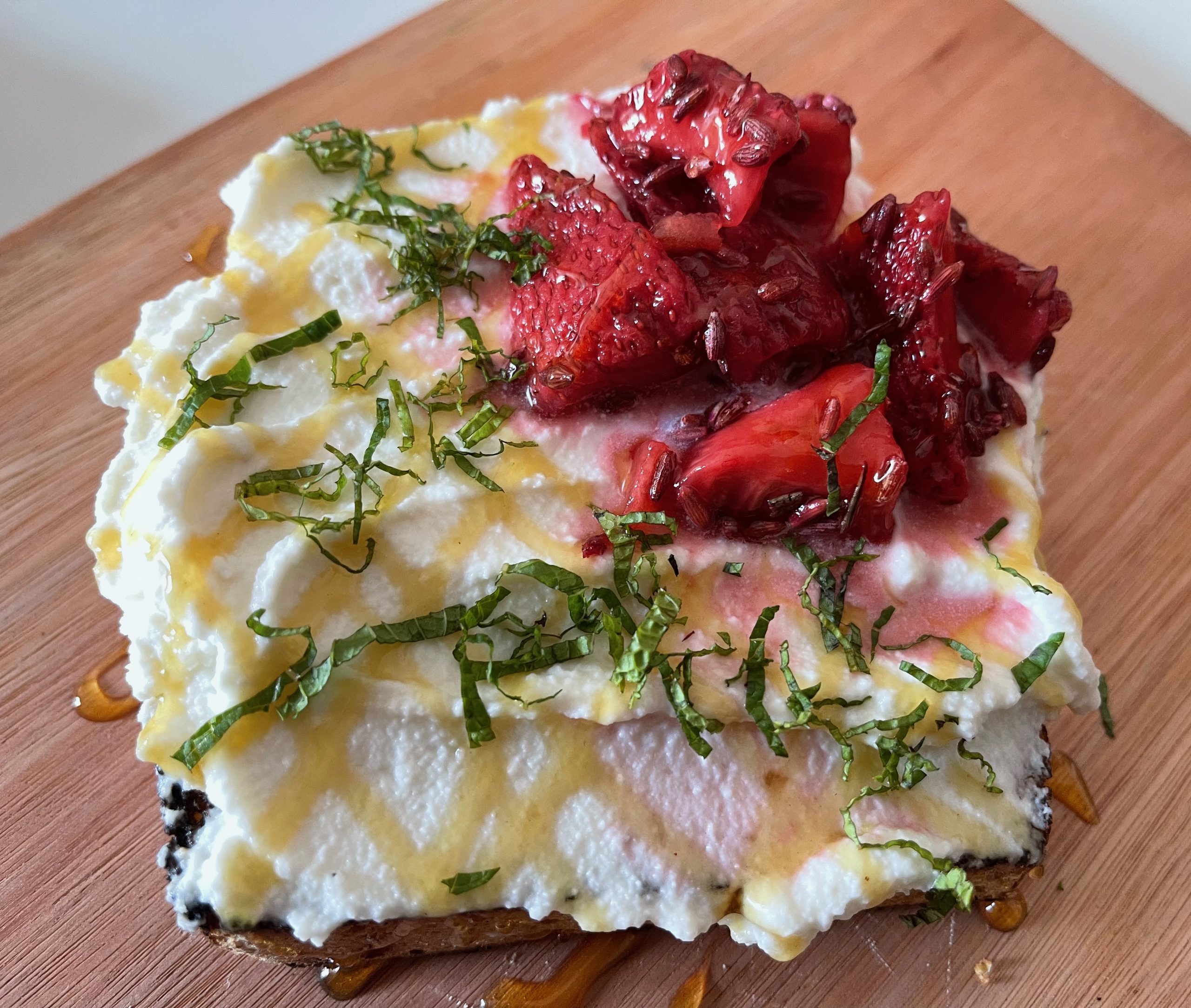 “Toasting makes me uncomfortable, but toast I love.
Never start the day without a good piece of toast.
In fact, let’s toast to toast.”
~George Costanza

You might think that only a short, stocky, slow witted bald man would live a life so mundane as to even consider making a toast to a good piece of toast.  That may have been the case even just a few years ago when many of us languished under the covers until the very last second then wolfed down a dry and uninspiring piece of toast while gulping a scalding cup of coffee.  With crumbs cascading down our chins and onto our button-down shirts, we rushed to our appointed rounds, destined to arrive at work two minutes after our designated start time.  Toast hadn’t sated our appetites and worse, contributed to our heartburn.

Since Eater designated 2015 as “the year of the avocado toast,” “gourmet toast” has been in an ascendency that’s finally caught up with Albuquerque.   It’s an idea whose time has come.  No longer should diners be satisfied with a cold pat of butter or cream cheese on no personality bread that’s already cool by the time it gets to your table.  We should be throwing open our windows and shouting “I’m mad as hell and I’m not going to take it any more.”  Avocado toast showed that toasted bread can be tabula rasa, a blank slate upon which inventive chefs can showcase ingredients, flavors, textures and forms.  As a canvas, toast should be limited only by the chef’s imagination.

“But,” you might point out, “Army cooks have been preparing toast in a unique manner for years.”  Yes, but there’s a reason chipped beef on toast is universally reviled as “SOS” or “$hit on a shingle.”  No, my friends.  By gourmet toast, I’m talking premium ingredients, mashups of flavors that complement one another, spreads and toppings which make you wonder “why hasn’t this been done before.”  Could it be it hasn’t been done before in Albuquerque because we tend to be a bit behind the times when it comes to culinary trends?

Actually, the reason it hasn’t been done before in the Duke City is because all trends require a star-alignment convergence of timing, people and place.  The time is now.  The people are co-owners Victoria Van Dame and Chef David Ruiz.  The place is the Curious Toast Cafe, situated in a charming, nearly 120-year-old building on 718 Central, S.W. in Downtown Albuquerque.   The building stands out like a flower among weeds as one of the few stand-alone edifices in an area perpetually wrangling with revitalization.

Because both Victoria and Chef Ruiz are proud Downtown dwellers, they’ve got more than a vested business interest in seeing the area thrive culturally and economically.  Victoria is the “ring master” (executive director) of the New Mexican based non-profit OT Circus Art Gallery & Creative Space.  She also manages the S.H. Kress building in Downtown which operated as one of many S.H. Kress & Co. five-and-dime stores scattered across the country until the mid 20th Century.

Chef David Ruiz is as accomplished as any chef in the Land of Enchantment.  As you’ll read in a 2021 profile in Spiceology, a chef-owned spice company, Chef Ruiz is indefatigable, a whirling dervish of talent.  Not only did he recently open Curious Toast Cafe, the 2018 winner of the James Beard Foundation’s Blended Burger Project is  building out a new dining program at Vara Winery. The revealing Spiceology interview portrays a man dedicated to his craft, a perfectionist who climbed the ladder rung-by-rung to become one of the state’s best chefs.

As we sautered toward the stately building which houses the Curious Toast Cafe, we were greeted by Victoria who introduced herself and cooed over our deboair dachshund The Dude.  She told us she’s got a long-haired dachshund at home who could be The Dude’s twin (obviously a very handsome little guy).  She welcomed us to “the best cafe in New Mexico” and told us there’s “something for the dogs” on the menu.  That made The Dude very happy.

At first, second and third glance, the Curious Toast doesn’t look like your run-of-the-mill cafe.  If anything, it more closely resembles the converted home slash art space it is.  Curious Toast occupies only the first floor of the building and doesn’t have a conventional dining room.  You’ll place your order in the hallway bisecting the first floor then find a cozy, comfortable seat.  You’ll be surrounded by unique art and bric-a-brac.  We found a space next to a coffee table sporting a football from the 1999 NFL Pro Bowl.

The current menu (Chef Ruiz already plans on revamping it with newly imagined creations) may well be the self-actualization of toast…toast being all it can be.  That menu is segmented into “Mornings” and “After Mornings” although items on both sections would be good at any time of day or night.  In addition to the ten toast items on those sections, the menu has a “sweet toast & things” section that features two “dessert” toasts.  A nice variety of coffees and teas are also available as is a refreshing and lip-pursing tart drink called the Sucker Punch.  It’s actually a dragon fruit lemonade, emphasis on the tart.

The special of the day during our inaugural visit was an Elote (my spellechecker insists the correct spelling is actually “elite” and this toast may well be that) toast.  It’s got virtually everything the street food version of elote has save for the messiness of eating it while you walk.  Atop a thick slice of fabulous toasted country bread procured from the nearby Downtown Growers Marker, you’ll find giant niblets of sweet corn, cotija cheese, lime juice and chile powder.  It’s better (and not nearly as messy) than having an elote on the cob.

Victoria walked by as we were perusing the menu so I asked her to recommend something.  Without any hint of vanity or self-aggrandizement she recommended a toast named for her–the Van Dame (seasonal wild mushrooms, pickled tomatoes, lemon aioli, arugula on a baguette).  It was an outstanding choice.  If you’re as fond of fleshy fungi as your humble blogger is, you’ll appreciate this sophisticated toast.  Earthy and umami-rich, the mushrooms were swoon-worthy.  The pickled cherry tomatoes also stood out for their fresh, juicy texture.

My Kim and I shared a dessert-like toast called the Fancy Face (whipped ricotta, poached strawberries, honey and mint).  So many good things piled atop a lightly toasted slab of the staff of life.   So many diverse flavor profiles: the creamy, slightly sour ricotta; the sweet and tart poached strawberries; the floral, exotic honey; and the sweet mint with its lingering coolness.  So much deliciousness atop one piece of toast.

A lot of restaurants claim to be “dog-friendly.”  Typically that means you and your four-legged fur baby can sit out on the (often sun-drenched) patio where the noisy din and choking exhaust of the traffic detracts from your experience.  Not so at Curious Toast where your canine children can enjoy the dining room, too.  As welcome guests, they’re also not excluded from the menu where you’ll discover toast isn’t just a people treat.  Your best friend can enjoy a repast of Pup Toast (wheat bread, almond butter, blueberries).   The Dude certainly did.

My thanks to photographer extraordinaire Bruce Terzes for having recommended the Curious Toast.  Like my Kim, Bruce is from Chicago where full Midwest breakfasts are standard fare.  He wasn’t sure toast would fully sate him, but in the short time Curious Toast has been open, he’s already made four visits.  His seating preference is on the front porch where you’ve got an unobstructed view of Route 66 just before the round-about.

Toast–It’s not for breakfast anymore.  The Curious Toast Cafe has made it fashionable to enjoy toast for lunch and brunch, too.  With an inventive menu sure to broaden the appeal of what was once a boring way to start off the day, Curious Toast just may be the best part of waking up…even if it’s at 1PM.