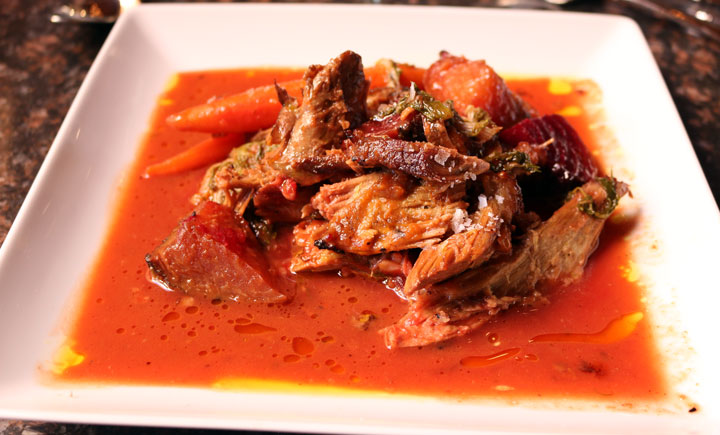 The customer in the Italian restaurant was so pleased that he asked to speak to the chef.
The owner proudly led him into the kitchen and introduced him to the chef.
“Your veal parmigiana was superb,” the customer said.
“I just spent a month in Italy, and yours is better than any I ever had over there.”
“Naturally,” the chef said. “Over there, they use domestic cheese. Ours is imported.”

While we were perusing the menu at Il Bosco, my Kim noticed polpette on the menu and asked me what polpette was. As usual, she got more than what she bargained for. “Polpette,” I joked “is the Italian word for meatballs…unless you’re in Montreal.” “What the heck are you talking about,” she asked. I explained that in 2013, Quebec’s language police cited an Italian restaurant for using Italian names for Italian dishes on the menu instead of their French equivalents. (In French, polpette would be called “boulettes de viande.” ) “That’s absolutely ridiculous,” she vented. “America may go overboard with its political correctness, but there’s no way any state or city could get away with bashing multi-culturalism. It would be like Albuquerque declaring its official city language to be Spanish and insisting everything be called by its Spanish name.” “Exactly,” I affirmed, “And you’ll love this. The language police also frowned upon the use of such words as “pasta,” “antipasti,” “calamari” and “pesce.” “We’re not going to Montreal any time soon,” she insisted.

“There are exceptions to the language law,” I piled on. “When there is no equivalent French term, the language police leaves the matter alone. For example, using terms such as “pizza” won’t rankle the ire of the bureaucrats.” Widely known as “Pastagate,” the aforementioned language correctness incident led to a public outcry about the overzealousness of the language police. In typical bureaucratic-speak, an official explained that in order to promote the French language, official Quebec policy mandates that the most predominant language on restaurant menus must be French. Italian words are welcome to appear, but just not as frequently as their French equivalents. With that, my Kim determined to understand and appreciate the authenticity and beauty of Italian terms used on Il Bosco’s menu. “We’ll move to Australia if some language police makes our Italian restaurants use English terms to describe their menu items,” she promised.

You haven’t heard about Il Bosco? Not to worry, grasshopper. Not many people have. It’s so brand new that it doesn’t even have a Yelp listing (as of March 9th at 9AM). We’d never heard about it either until last Sunday (March 4th) when Randolph Eck submitted a comment declaring Il Bosco’s meatballs “the best in New Mexico.” His email came in just as we were contemplating where to go for lunch that lazy Sunday afternoon. A two minute phone call confirmed that Il Bosco has a dog-friendly patio, so The Dude would be welcome, too. Best of all, Il Bosco is on Albuquerque’s burgeoning west side in an area with a dearth of independent restaurants.

You won’t see Il Bosco from the street. Il Bosco is ensconced within the capacious La Bella Spa Salon on Coors Blvd. about a quarter mile from Alameda Blvd. It shares a parking lot with salad purveyor Sweet Tomatoes. La Bella promises an experience that is “luxurious in every way, yet uncommonly warm and inviting.” Previous attempts at making a restaurant part of that experience include Bouche and Tratta Bistro, both of whom received significant public and critical acclaim if not the traffic desired. Here’s betting Il Bosco achieves both the acclaim and the dining traffic.

One of the reasons is Chef Steven Peyer, a Seattle native and Sonoma, California transplant who has fallen in love with the Albuquerque area. Chef Peyer launched several restaurant concepts in the Sonoma area, a hotbed for culinary trends. Among them was a dual restaurant concept in which both Italian food and South Asian street food were offered under the same roof. Fittingly named Forchetta/Bastoni (“Forks/Sticks” in Italian; who knows what it would be called in Quebec), the Italian food was the fork and South Asian street food the stick. Chef Peyer operated the Italian side of the house.

Our first impression as we studied the Il Bosco (an Italian term for “the woods”) menu was “there’s nothing like this in Albuquerque.” Indeed, the menu is unique, the antithesis of the Italian red sauce restaurants we love so much in the Land of Enchantment. As with most California-style Italian restaurants, there’s an emphasis on fresh, non-GMO ingredients, sourced locally wherever possible. You’ll see items on the menu you won’t see elsewhere in Albuquerque (Sonoma coast cockles anyone?). You’ll also find braised meats, unconventional risotto and pasta dishes and rustic Italian food. The lunch menu offers about seventy percent of what you’ll find on the dinner menu.

We’ve rarely seen risotto offered as an appetizer save for when served in the form of arancini, stuffed risotto balls coated with bread crumbs then deep fried. Il Bosco’s risotto dish, Risotto di Barbabietola, is served as an appetizer for lunch and as an entree for dinner. Chef Peyer uses “the highly prized princess’s rice grown in the Milan region for over 400 years.” Indeed, this is risotto fit for royalty. Unlike most Milanese style risotto, this one is far from golden-hued (courtesy of saffron). Instead, it’s pink-red courtesy of the infusion of red and gold beets along with Gorgonzola, the blue cheese for people who think they don’t like blue cheese. There are plenty of sweet, delicious beets in this dish and they’re a perfect counterbalance to the salty, sharp Gorgonzola. The rice is creamy, silky and rich, a wonder to eat.

Quebec’s language police may take offense at the name Polpette al Forno (housemade veal, beef and pork meatballs slowly poached in sweet and spicy tomato broth, baked with Bellwether Farms ricotta, Calabrian chili and herbs), but not even the palaver police could take offense at these meatballs. They may indeed be the best in Albuquerque. Served in a too-hot-to-touch skillet, the meatballs are about three forkfuls apiece and there are six meatballs per order. There’s very little filler in these meaty orbs. This allows the veal, beef and pork flavors to coalesce into a flavorful whole. Sweet and spicy tomato notes are a perfect foil for the sweet, creamy ricotta. These are the meatballs you would imagine your own mother (if she was Italian) would prepare for you.

Call it vanity if you will, but for years I’ve avoided reading glasses even though it’s pretty obvious presbyopia has set in. Sometimes my near-sightedness is annoying. Sometimes it manifests itself in humorous ways. While perusing Il Bosco’s menu, I wondered why house-made pasta would be tossed with “Sonoma coast cookies.” I’d never even heard of this type of cookie. My Kim, who’s not too proud to wear reading glasses, corrected me. “It doesn’t read cookies. It reads cockles.” The dish is actually linguini alle vongolo, house-made pasta tossed with Sonoma coast cockles (not cookies), olives, capers and chilies in a rose’ sauce. These cockles will warm the cockles of your heart. Found only in seawater, cockles are bivalve mollusks which are related to clams. Chef Peyer has obviously mastered the preparation of cockles. We relished every single bite and spoonful of broth of this rare in Albuquerque seafood dish.

Our favorite entree and one of the very best Italian dishes we’ve had in New Mexico is the bresato di maiale, braised pork shoulder with winter root vegetables and Swiss chard in a tomato broth. The braised pork shoulder pulls apart easily, each tender tendril resplendent with flavor, each morsel a joy to eat. A few caramelized edges provided an enjoyable textural contrast. Among the root vegetables were tender, sweet carrots and golden beets, both of which imparted light sweet notes to the acidic tomato broth. Similarly the Swiss chard a spinach-like bitterness which melded so well with other flavors in this magnificent meat dish.

Only two desserts were available on the date of our inaugural visit, a meyer lemon tart and a flourless chocolate tort. Not able to decide quickly, we asked our server (the delightful Ashe) to choose for us. She brought us an exquisite chocolate tort which we enjoyed immensely. As with so many similar desserts we’ve enjoyed, this one leaned toward the dry side though it was just moist enough. Though quite good, during our next visit “dessert” might just be a bowl of the minestrone invernale, the restaurant’s winter vegetable and greens soup.

It didn’t take long after her first bite of the risotto for my Kim to forget all about Quebec’s language police. It didn’t take long for all our cares to melt away as we luxuriated in a magnificent milieu in which great Italian cuisine is standard fare.