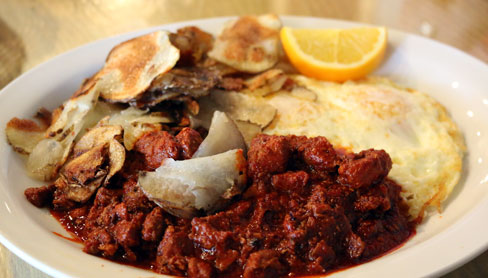 Three is also the number of visits to New Mexico restaurants made in December, 2007 by Guy Fieri while filming episodes of Diners, Drive-Ins and Dives for the Food Network. Fieri was wise enough to make one of those visits to Santa Fe’s own owl, the famous and fabulous Tecolote Cafe. Tecolote is the Nahuatl (Aztec) word for “owl,” but founding proprietors Bill and Alice Jamison actually named their restaurant for an all-but-deserted Northern New Mexican village alongside the railroad tracks just south of Las Vegas, New Mexico about 55 miles east of Santa Fe.

Throughout history, the owl has played a significant role in the myths and legends of many cultures. Just as in Old Mexico, in northern New Mexico the owl often represents “la bruja” or the witch–either the malevolent or benevolent kind (as masterfully represented by the title character in the outstanding Rudolfo Anaya novel Bless Me Ultima). As such, to many the owl is either to be feared or revered. The attribution of wisdom to the owl actually started with Ancient Athenians who called the owl the bird of wisdom. It’s conventional wisdom for Santa Fe residents to start their days with breakfast at the Tecolote Cafe, one of the city’s most popular dining destinations. It became even more popular after the Food Network first aired the episode of Diners, Drive-Ins and Dives featuring the restaurant.

The December filming occurred shortly after the staff had decorated the restaurant for Christmas. Because the Food Network airs each episode several times throughout the year, the Tecolote staff had to take down the Christmas decorations so that the restaurant would appear seasonally agnostic.The Diners, Drive-Ins and Dives crew spent about 23 hours over a two-day period in the restaurant. Host Guy Fieri’s focus was on the Tecolote’s famous red and green chile which he helped prepare under the watchful eye of former general manager Chris Valdez (who now owns and operates the fabulous Chris’ Cafe), one of the coolest and down-to-earth restaurant personalities we’ve met–an excellent foil for the effervescent Fieri.

The Tecolote received the coveted third segment on the program, meaning it the segment was bisected by a commercial. The segment lasted little more than six minutes, but it reintroduced America to a Santa Fe treasure which was named one of Santa Fe’s ten best dining destinations by Fortune magazine in the early 1990s Since it opened in June, 1980, the Tecolote Cafe has earned a bevy of accolades. It is a perennial winner of “best breakfast” awards from local and national publications. Quite simply, it’s one of the best reasons to get up in the morning in Santa Fe. In fact, you’d better get up early and get to the Tecolote shortly after it opens at 7AM because within an hour after opening, you might just have to wait for a seat.

In the 2011 season premier of the Sundance Channel’s Ludo Bites America show which first aired on July 19th, nomadic chef Ludo LeFebvre transformed the Tecolote Cafe into Ludo Bites Tecolote. The premise of the show is that the eccentric chef travels across the country and creates a “pop-up” restaurant on an existing restaurant premises. Only New Mexico’s piquant peppers were a match for Ludo’s tempestuous nature in this entertaining half hour. Interesting though they were, the liberties Ludo took in crafting a New Mexico meets Ludo menu pale in comparison with Tecolote’s standard menu.

When Alice and Bill Jennison first opened Tecolote Cafe in 1980, their mission was to serve excellent food at a reasonable price while making their guests feel at home. Over three decades later the family still strives for these qualities. Bill passed away in May, 2010 and Alice followed suit two and a half years later. Today, their daughter Katie and her husband Matt own and operate the Tecolote, pleasing Santa Fe’s palate now for more than three decades. The restaurant’s staff is among the most accommodating and friendly in the City Different. Our favorite is Mela whose broad smile and buoyant sense of humor make early mornings easier to take.

One of the cafe’s mottos is “Great Breakfast–No Toast.” That’s okay because you won’t miss toast in the least. Breakfast entrees are accompanied by your choice of a bakery basket or a tortilla. In its July-August, 2010 issue, Food Network magazine celebrated the “most important meal of the day” in a feature entitled “50 States, 50 Breakfasts.” The magazine featured “the best breakfast” in every state in the union. The New Mexico selection was the Tecolote Cafe’s atole piñon pancakes (more on these gems later). Apparently even after five years, the Food Network couldn’t find any better breakfast in the Land Of Enchantment as it named those atole piñon pancakes New Mexico’s best breakfast choice in 2015, too.

6 December 2015: The bakery basket includes a variety of muffins, cinnamon rolls, biscuits, strawberry preserves and whipped butter. It arrives at your table shortly after you place your order and it arrives just out of the oven fresh, hot and delicious. If the basket doesn’t fill you up, it’ll put a dent on your appetite. The strawberry preserves are homemade and are as good as you’ll find anywhere in New Mexico.

Save room for the Tecolote’s chips and salsa. Although New Mexico is the world capital for chile, many of our restaurants don’t use chile on their salsa, heating it up instead with jalapenos. That’s a shame because red and (or) green chile can really liven up salsa. Red chile piquin is discernible in the Tecolote Cafe’s salsa which is the rich red color of invigorating freshness and piquancy. This salsa packs a punch as it should, but where it stands out is in its chile enriched flavor.

The cafe’s other motto as sported on the shirts worn by the staff is “Get Your Chile Fix at the Tecolote Cafe.” That’s an appropriate motto for a cafe which serves up some of the best chile in northern New Mexico. In Santa Fe the only green chile to compare with this one comes from the legendary Horseman’s Haven. It is quite simply outstanding! That green chile is showcased in several of the restaurant’s signature dishes, but may shine most brightly on the Huevos Yucatecos. Initially offered as a special, it became so popular it just had to be added to the menu.

Huevos Yucatecos feature corn tortillas layered with black beans, two eggs any style, green chile, Swiss and feta cheese, pico de gallo, and surrounded with fried bananas. It is served with your choice of beans, posole, or potatoes (ask for all three). It is one of the dishes featured on Diners, Drive-Ins and Dives. It stands to reason that host Guy Fieri would relate to an entree which melds seemingly disparate ingredients. Several years ago Fieri launched Tex Wasabi, a restaurant serving Southwestern barbecue and California-style sushi, as innovative a fusion of disparate cuisine as you’ll find anywhere. Fieri appreciated the Huevos Yucatecos.

This dish arrives at your table piping hot with the aroma of piquant green chile steaming toward your nostrils. It’s an aroma every New Mexican finds as alluring and irresistible as a siren’s call. The Tecolote Cafe’s green chile is absolutely wonderful (though I’ve already stated this, it bears repeating), epitomizing the high standards for which our state vegetable is beloved. At over easy, the yoke from the fried eggs runs onto the green chile to add another flavor dimension. For absolute contrast, however, slice up the fried bananas and use your fork to dip them into the green chile, egg yolk mix. Think Bananas Foster New Mexico style.

The fried potatoes are crispy and low in salt, a commonality among many menu items. The chile and beans, in fact, are prepared in pure soy oil with very little salt. They contain no meat or cholesterol. Back to the fried potatoes. They’re sliced almost potato chip thin, but have a great flavor. The pinto beans are not your run-of-the-mill soupy, just-off-the-stove pintos nor are they the often dreaded and desiccated refried beans. These beans have obviously simmered on a stove and are served at the peak of flavor.

6 December 2015: Another popular breakfast entree is carne y huevos. The carne is adovada, a heaping serving of lean pork loin cooked in a blend of chiles (including chile piquin), chopped garlic, cracked pepper and Mexican oregano. The pork is both cubed and shredded with the obvious low and slow preparation style which makes it tender. The best carne adovada tends to have a very smooth and mellow flavor profile. Tecolote’s rendition is a bit heavy-handed with the oregano, rendering an otherwise excellent adovada more than a bit on the astringent side. This entree is served with two eggs any style and the Tecolote Cafe’s famous potatoes.

Aside from the chile, the one dish which seemed to capture Fieri’s imagination was the atole blue corn-piñon pancakes which he described as having “real texture, not just light fluffy nothing.” He called them “some of the best.” Forty years ago the word “atole” was among the most dreaded in the vernacular of northern New Mexico for this native. Atole then represented a thick cornmeal cereal which my abuelitas swore had curative properties. They never succeeded in getting me to eat it. Maybe they should have used it to craft pancakes. The secret to these pancakes is the blue, ground cornmeal which is the chief ingredient in the atole I dreaded so many years ago. Toss in piñon evenly throughout the pancakes, serve them with hot maple syrup and whipped batter and you’ve got just about the best medicine for the morning blues.

6 December 2015: The special of the day, scrawled on a slate board near the restaurant entrance, sported the rather interesting name “The Kitchen Sink,” a term which implies an entrée made with everything in the kitchen and then some. Alas, when it came time to place our orders, I had forgotten the name and called it the “Garbage Pail.” It took Mela a few seconds to figure out what I wanted. The Kitchen Sink starts off with two fluffy biscuits, one topped with green chile and the other with carne adovada, both of which are blanketed by two eggs. This is a terrific dish, especially the biscuit half topped with the green chile. As we joked with Mela, there’s no way a dish this good could possibly be named for refuse.

You may have noticed from the photograph at the start of this review depicts a different Tecolote Café than one you may have visited in the past. For almost 34 years, the Tecolote Café served the City Different on heavily trafficked Cerrillos. On April 20th, 2014, the fabled and fabulous restaurant closed its original restaurant, reopening in much more capacious and modern digs on July 14th, 2015 at the Village West Shopping Center on Saint Michael’s. As with its previous location, getting seated at the Tecolote Cafe may take a while, but once you’re seated, the staff is quick to deliver some of the very best breakfast in New Mexico. To avoid a lengthy wait, get there when the restaurant opens promptly at 7AM and you’ll beat the crowds of owl-wise diners who love the Tecolote Cafe.