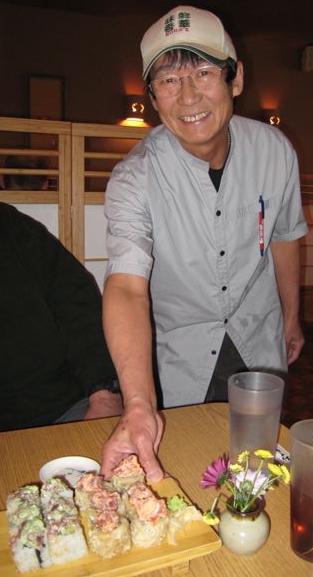 Note: On December 16, 2010, Noda’s Japanese Cuisine, a Rio Rancho institution for a dozen years, closed its doors.  Owners Masayasu and Setsuko Noda have retired and will be relocating back to Japan.  It was initially announced that their son, an accomplished chef, would be looking for a new home for the restaurant many consider the very best Japanese restaurant in the state. Nearly five years later, we’re still waiting.

Noda’s may very well be the very best Japanese restaurant in New Mexico, an off-the-beaten-path treasure whose unassuming facade belies sophisticated and wonderful cuisine.  Tucked away in Trinity Plaza, a nondescript shopping center, that facade is quickly dispelled when you walk in to a dimly lit dining room whose subtle, but romantic ambience and attentive, but not hovering wait service portend something special. Noda’s has become so popular, in fact, that in 2006 it expanded and now occupies the entire building in which it has been housed from its humble beginnings. At one time, Noda’s shared space with other tenants.

Cherry blossoms, soft lights, hanging Japanese lanterns and subtle blue toned walls provide a tranquil environment ameliorated by the faint tintinnabulation of the dozens of wind chimes given to the Nodas by their customers. Interspersed among the Japanese accoutrements are an occasional Kokopelli and even a Navajo Kachina.

You can’t help but decelerate from the day’s maddening pace, even if you’re at Noda’s just for lunch. When not tied up in the kitchen, Mr. and Mrs. Noda meet and greet all their customers and with enough visits may get to know you by name.

An intriguing menu showcases authentic Japanese treasures prepared exceptionally well. The taste arsenal varies from sublimely sweet (as in a thick teriyaki sauce with a tangy taste and a subtle hint of ginger) to sushi for which you need a mouth lined with asbestos to consume. The teriyaki sauce isn’t quite syrupy thick, but it’s wholly unlike the runny sauce proffered at other restaurants. It’s a perfect complement to salmon, beef or chicken.

If you love fried chicken, a must have is Noda’s crunchy chicken seasoned with teriyaki. The chicken is crunchy on the outside and juicy on the inside. If ginger is your preference (I prefer Mary Ann), the ginger beef–thinly sliced beef sautéed and seasoned with a thin ginger sauce–will please your palate.

Donburi is a specialty of the house at Noda’s. A general term for “bowl,” donburi is also the name of Japanese dishes in which a bowl of cooked rice is topped with other items. The spicy tuna donburi, for example, might remind you of eating sushi in a bowl (thank you Bill Resnik for that line). The perky, spicy beef donburi features a pow in every bite, making you grateful that the rice is cutting the heat of the beef somewhat.

The photo below depicts spicy tuna and yellowtail donburi accompanied on the side by wasabi, the house soy sauce (not nearly as salty as the commercial brand) and ginger, the typical accompaniment for sushi.  As with sushi, the vinegared rice might be warm (as when served with anago) or cold (as when served with spicy tuna).  If you like your donburi even more incendiary than standard, ask for a side of the spicy mayonnaise.  It’s pure dynamite.

Perhaps the most “sushi-like” donburi bowl is the Anago Tempura Sushi bowl. It starts off with a bowl of sushi rice which is topped with a savory water eel (Anago) sheathed in some of the best Tempura in New Mexico, green chile (also sheathed in Tempura), avocado, cucumber, green onion and flying fish roe. This mouth-watering concoction showcases the unique talents in the kitchen.

Plating at Noda’s is an eye-pleasing art form. Everything is where it should be for optimum harmony, balance and appearance, a sort of plate syzygy. The balance of color, texture and appearance makes diners give pause to reflect on how great everything looks before their taste buds confirm what their eyes already know.

Order one of the daily specials, cod kara-age for example, and you’ll be asked if you want the entree by itself or bento box style.  The bento box is a lacquered and embellished with beautiful and ornate flowers, but the real beauty is seen when you remove the lid and gaze upon the partitioned box and its apportioned treasures.  Tempura vegetables, rice, two California rolls, and pickled cucumbers fill their compartments, seemingly in an attendant role to the main entree.

As purveyors of sushi, Noda’s may have no equal in New Mexico–in terms of taste, degree of heat and perfect preparedness of the rice–despite not having a traditional sushi bar.

Mr. Noda also confirmed that the restaurant uses a blend of real wasabi and the doctored horseradish most restaurants use. You can tell the difference. Real wasabi has an earthy taste and won’t make your eyes water.

If tuna turns you on, the dinner menu’s Tuna Tataki NJC (Noda’s Japanese Cuisine) style will quell your lust. Seared on the outside and perfectly pink inside, this tuna is artfully presented on a green banana leaf and is topped with daikon radish, green onions, micro greens and Japanese seasonings. It’s probably the best seared tuna in the metropolitan area.

Terrific tuna is also available in a unique Noda’s appetizer called Tuna Millefeuilles, an appetizer rarely seen in New Mexico. Millefeuilles is generally a type of pastry consisting of two thin sheets of pastry laid on top of each other (like a sandwich) with a spread (such as butter) on the inside and a thin layer of icing on top.

Noda’s takes creative license with this appetizer, by layering fresh mozzarella cheese and tuna in between thin cracker-like sheets that included shaved almonds and seasoned with a basil dressing. The basil dressing complements the mozzarella well, but this appetizer might have been better with a wasabi mayonnaise.

All entrees are accompanied by leafy garden salads and miso soup. The salads are garnished with crunchy puffed rice and a spry ginger dressing. The miso soup with cubed tofu is invariably warm and consistently among the best of its genre in the state.

Noda’s offers only two dessert options, a homemade green tea ice cream which is fabulous and a vendor provided plum sorbet that will totally blow you away. The plum sorbet is refreshing, as smooth as velvet, creamy and with a pronounced taste of fruit at its very freshest. This is guilty pleasure sorbet that you’ll want to consume by the box.