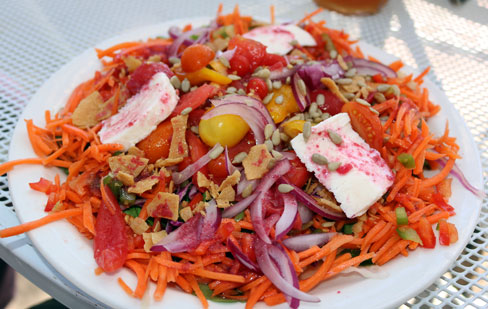 “And he gave it for his opinion,
that whoever could make two ears of corn,
or two blades of grass,
to grow upon a spot of ground where only one grew before,
would deserve better of mankind,
and do more essential service to his country,
than the whole race of politicians put together.”
– Jonathan Swift, Gulliver’s Travels

Had Jonathan Swift not uttered those words of sagacious cynicism, there’s a good chance Armand Saiia would have. It’s a sentiment that resonates with Armand, the effusive chef-owner of Desert Grows. Sensing our confusion as we approached the towering trees providing sweet, salubrious shade to a charming courtyard at his first Albuquerque location, Armand welcomed us to one of the Duke City’s most unique and most welcoming milieus, assuring us that we were indeed at the right place. Only partially joking, he explained that the goal of his restaurant is to “provide food on Route 66 for the 99-percent” and that he would like to “turn the Route 66 upside-down as a sign that the 99-percent of us are in distress.”

Route 66, or at least the original route that meandered south from Santa Fe through Fourth Street is where Desert Grows is located. Unlike at its inaugural location a few blocks south of its present venue, there’s plenty of signage to let you know you’ve reached your destination. Banners will apprise you of the “Fresh Fabulous Food” and “The Best Burritos” within the premises. Then there’s the mobile food kitchen in a utility trailer so proximate to the restaurant that you’ll wonder if the two are connected. A walkway to the entrance bisects a comfortable patio, albeit one not shaded by towering cottonwoods as the first Albuquerque instantiation of Desert Grows had been.

Armand is a true Renaissance man with a passion for sustainable, healthy food, but unlike so many of the celebrated chef luminaries plying their trade in New Mexico, his path to a culinary career in the Land of Enchantment doesn’t include the usual matriculation at an accredited culinary school. Instead of artistry on a plate, Armand’s chosen career path was as a painter and sculptor who attained success in New York City (and if you can make it there, you’ll make it anywhere), but being an artist only begins to define his assiduous life. He’s also been a filmmaker, yogi, healer, wilderness camp instructor, organic farmer, restaurateur and chef.

It was his experiences in the restaurant field that would define his current life’s path. Those experiences didn’t cultivate a myopic, profit-driven mindset; they awakened a passion to combat the “industrial food plague” which he contends contributed to the deaths from cancer of two wives. He also believes that poor consumer health and suspect food quality is the ultimate cost of corporate agriculture and its mass production of inexpensive, chemically modified food. The alternative, he says is sustainable, local agriculture which may cost more, but is so much better and more importantly, better for you.

About a decade ago, Armand’s passions led him to Ribera, New Mexico where he bought a nine-acre farm he christened Infinity Farms. After tending to vegetable gardens and greenhouses for three years, the gentleman farmer expanded his operation, establishing Desert Grows, a nonprofit agency he chartered to encourage and support other small farmers in the valley. For eight years, Armand even served as mayordomo for the acequias which are the life’s blood for all farms in the area.

In 2014, Armand launched a restaurant he named The Desert Rose at the Fashion Outlets of Santa Fe, offering simple fare–sandwiches, salads, pastas and baked goods–to enthusiastic diners. Despite critical and popular acclaim, he didn’t see eye-to-eye with the mall owners and relocated to Los Ranchos de Albuquerque where he launched Desert Grows. The menu boasts of “serving 90% New Mexico locally and naturally grown or eco-sourced food,” The restaurant is provisioned with fresh local produce from his new acreage in the South Valley as well as his farm in Ribera and from La Montañita Co-op.

Whether you’re passionate about sustainability and maintaining a small footprint or you’re just passionate about great food, Desert Grows has something for you. It’s got breakfast and lunch Tuesday through Sunday and dinner by reservation only. The lunch menu features salads, sandwiches and chef’s specialties such as an Italian meat loaf plate, carne adovada tacos and more. Whatever you order is best washed down with organic apple cider (cherry, ginger, mint or lemonade apple). It’s, by far, the best we’ve had in New Mexico.

26 September 2015: While the menu is replete with temptation, daily specials are equally alluring. Armand is proud and passionate about everything on the menu, perhaps proudest of all of the heirloom tomato salad, a lush, lavish in-season cornucopia of freshness plated with artistic flair. This bounty of the garden showcases beauteous red and yellow heirloom tomatoes whose juicy deliciousness belies their plum size, julienne carrots, red onions, red peppers and mozzarella slice drizzled with a beet vinaigrette. It’s beautiful to ogle and delightfully delectable to eat.

26 September 2015: If you see potato wedges scrawled on a slate board on one of the mobile kitchens window, you’re well advised to order them. While technically not wedge-shaped (they’re more silver-dollar shaped), these terrific tubers, each about an eighth of an inch thick, are superb–maybe even better when dipped into the housemade (with fresh tomatoes) ketchup. If you like the papitas served with so many New Mexican dishes, you’ll love these, though they may make you pine for red or green chile.

26 September 2015: Even though you won’t see a smoker on the premises, there are many ways to impart a barbecue-like smokiness to meats. The brisket tacos are certainly imbued with the type of smokiness you’ll find in sanctioned barbecue competition. It’s a light smoke intended to impart flavor and personality, not overwhelm the meats. Tender tendrils of brisket blanketed by molten cheeses nestled in moist, pliable tortillas define these tasty tacos. Carne adovada tacos are also on the menu, but this isn’t your abuelita’s carne adovada. Armand uses five different chiles, not all New Mexican, on the adovada, imparting a piquancy that’ll please fire-eaters.

26 September 2015: Barbecue aficionados will appreciate the boneless brisket ribs (any comparisons with Applebee’s riblets should subject you to flogging), a plateful of moist, meaty ribs glistening with a chocolate-mole barbecue sauce. The unique sauce alone makes these ribs a great choice, but it’s the magnificent meat carnivores will appreciate most. Though not quite fall-off-the-bone tender, each mouth-watering rib has a fresh-off-the-grill flavor. The ribs are served with French fries (which are best eaten with the chocolate-mole barbecue sauce) and a tangy coleslaw.

26 September 2015: Desert Grows is no slouch when it comes to desserts. Armand’s partner Betina Armijo bakes some of the best bizcochitos in town. Four per plate of these anise-kissed cookies will leave you pining for more when they’re done. Neither cake nor pie, bread pudding can be a carb-overload, ultra-decadent dessert too rich for some. For others, bread pudding is a little slice of heaven. Desert Grows’ bread pudding cake is so sinfully rich, moist and delicious it may leave you swooning.

30 April 2016: One of the saddest terms in the English language is “what if” as in “what if I hadn’t worn my plaid jacket and striped pants to that job interview.” Alas, that sad term was oft spoken as we attempted to enjoy Mama’s Italian Meat Loaf Plate, described on the menu as “not your ordinary boring meatloaf. Our Sicilian Mama developed a sumptuous blend of local pork, lamb and beef that you will remember.” We won’t remember it too fondly. If only it hadn’t been so dry (edges were more than caramelized, they were nearly burnt). Shaped more like a rectangular burger patty, Mama’s Meat Loaf had a nice flavor, but lacked moistness. If only the accompanying skin-on mashed potatoes had a little gravy, they, too, wouldn’t have been so desiccated. The saving grace for this dish was a salad drizzled with the house beet vinaigrette.

30 April 2016: Nowadays it’s a treat when a restaurant offers real maple syrup with pancakes. Desert Grows one-ups those restaurants with a star anise syrup in which you’ll find star anise as big as Chinese throwing stars. It was no surprise that the star anise influence on the syrup reminded us so much of Vietnamese pho ( on which star anise is a distinct ingredient). To cut the sweetness of the syrup, the pancakes are also served with a tangy blueberry compote. Few things in life are as satisfying as three fluffy pancakes topped with blueberry compote and star anise syrup, a plate made even better by three pieces of thick, smoky bacon.

30 April 2016: Granola Cereal (house-baked granola served over organic yogurt with seasonal New Mexico fruit and nuts) is a real treat at Desert Grows. The organic yogurt is neither as savory as Greek yogurt nor as sweet as some commercial yogurt brands tend to be. Yogurt may have lactobacillus and an assortment of other bacterial fermentation, but what we appreciate most from this sweet-sour-savory bowl of deliciousness is its diverse flavor and textural profile.

If you find yourself in the North Valley and you see a sign telling you you’re on Route 99, make your way to Desert Grows where all your cares melt away as you luxuriate in fresh food you can trust.