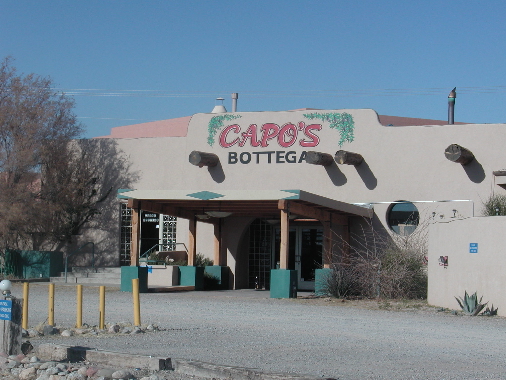 Fifty years ago when Frank Venaglia opened the first of his family of Capo’s restaurants in Albuquerque, the Italian term “capo” didn’thave quite the notoriety it does today thanks to countless Mafia movies and the Sopranos television series. In the Mafia, capo is a shortened term for “caporegime” or “capodecina” which essentially translate to a high-ranking family member of a crime family who is in charge of a crew of soldiers–a captain so to speak.

Today the Venaglia family owns and operates a family of four Italian restaurants-Capo’s Piazza (722 Lomas, N.E.) and Villa Di Capo (722 central, S.W.) in Albuquerque, Capo’s Corner (110 Pioneer Road) in Red River and the latest addition, Capo’s Bottega in Bernalillo. Another family venture, Capo’s Hideaway, also in Albuquerque, closed several years ago. The name “Capo’s” certainly does not imply any affiliation with the Mafia. Think of it more as implying “a captain among New Mexico’s Italian restaurants.”

The Bernalillo restaurant is in an idyllic setting despite its proximity to the garish Santa Ana Casino. Situated on the site of the former Milagro restaurant and microbrewery, it’s humdrum facade belies a beautiful exterior. Wood accents are prevalent throughout the restaurant. Climbing the wooden stairs to restaurant level, you’re immediately struck by the sheer size of several massive, knotted viga columns (at least six feet in circumference) throughout the restaurant. Wooden planked ceilings are supported by smaller beams off of which shelves serve as repositories for hundreds of beer bottles from all over the world.

A capacious east-facing patio provides a panoramic view of the magnificent Sandias and of Bernalillo’s Rio Grande lush bosque. On a crisp, clear day (and when the mosquitoes and gnats aren’t mercilessly harassing you) it’s a inspiringly romantic setting on which–weather permitting–musical accompaniment to your dining experience is provided on occasion. The ambiance certainly inspires reflection on la dolce vida (the good life), but ambience is only a small part of the dining experience.

Capo’s Bottega shares the same menu as its sister restaurants–a menu which offers a wide variety of tried and true Italian favorites showcasing sauces prepared daily in the kitchen. After several disappointing meals at the defunct Capo’s Hideaway, we knew what to expect. To quote from the review of Villa Di Capo by bloggers extraordinaire Eckleburg and Grumblecake of I8Route66 “the potential to be great, but slow service and so-so food make this place more tired than classic.”

In truth, Capo’s Bottega is much better than Capo’s Hideaway which was infamous for poor execution (friends tell me the chef should have been executed) in almost all facets of its operation. Still, savvy patrons who lament the dearth of truly outstanding Italian restaurants will lump this one among the other middling Italian dining establishments in which nothing is too bad, but nothing is too good either.

Dinner salads include the same old tired ingredients I imagine were available when Villa Di Capo opened in the 50s–iceberg lettuce, croutons, cucumbers and red onion. The salad dressings seemed watered down, a cardinal sin when “as much blue cheese as you can carry” is requested. There are few things as offensive as eating your salad with a spoon in order to sop up some of the dressing.

The menu describes the Fettuccini Carbonara as “a perfect blend of ham, bacon and peas covered with Capo’s Alfredo sauce.” Great carbonara is almost sinfully rich and replete with freshly milled black pepper and pancetta (much more than just Italian bacon). Capo’s is not great carbonara. It is adequate and nothing more, lacking not only the pancetta and pepper savvy diners crave, but the creaminess that defines the sauce.

The saving grace may be Capo’s pizza, a medium-crust pie which you can have with your choice of ingredients. Call us gullible, but we were lured in again by the promise of “hot Italian sausage.” In this case, there was no false advertising. Capo’s uses some pretty spicy sausage on its pizza and the chile is even more piquant. To date, the pizza is the best entree we’ve ever enjoyed at a Capo’s restaurant.

We would have enjoyed the cannoli more had the ricotta not been so tooth-decaying sweet.

A visit to Capo’s Bottega delivers spectacular vistas and a pleasant ambience. It may not deliver all that you crave in an Italian meal, but few restaurants in New Mexico do that.