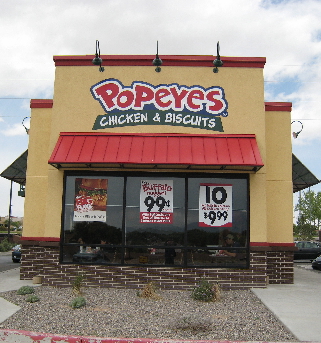 Shortly after Louisiana and Mississippi were ravaged by Hurricane Katrina, one of the local television stations in South Louisiana actually aired an interview with a woman from New Orleans. The interviewer was a woman from a Boston affiliate, so she asked the interviewee how such total and complete devastation of the churches in the area had affected their lives.  The woman replied,” I don’t know about all those other people but we get our chicken from Popeye’s.” The look on the interviewer’s face was priceless.  That anecdote rings with truism

Contrary to the images the name might conjure, Popeye’s is not a nautical themed restaurant which serves spinach.  That might be why the restaurant’s full appellation is “Popeye’s Chicken & Biscuits.”  In reality, Popeye’s is named for the irascible character Popeye Doyle from the movie “The French Connection.”   It is the brainchild of restaurant impresario Al Copeland who founded the New Orleans style poultry palace in 1972 after a failed venture featuring mild, Southern-fried chicken.

New Orleans style chicken is imbued with the exciting, spicy flavor about which Cajuns are passionate.  In our eight years of living in Mississippi, we rarely dined at Popeye’s, preferring local alternatives with even more incendiary cayenne pepper producing heat.  Considering no one loves the heat of piquant foods like New Mexicans, you would think Popeye’s would be embraced yet the 1990s saw Albuquerque’s Popeye’s restaurants succumb to closure.

November 12, 2005 saw the launch of the first of twelve planned Popeye’s restaurants in the Duke City.  If the opening day pageant of vehicles (including ours) snaking around the building at a crawl for up to two hour waits portends future success, Popeye’s is here to stay–for good this time.

At first glance Popeye’s fried chicken resembles the fried chicken you can find at any grocery store. Its crispy coating is akin to the Colonel’s extra crispy offering.  That crispy exterior belies the juiciness within.  Popeye’s fried chicken is moist, tender and infused with cayenne, that spicy seasoning Cajun Americans have come to love although some fire eating New Mexicans might wonder what the hullabaloo is all about because the chicken is fairly tame compared to the incendiary foods on which they were weaned.

Biscuits, which share prominence on the restaurant’s marquee, are buttery with a light golden hue.  Unlike the biscuits proffered by Popeye’s competitors, they don’t crumble on your hands.  Sides include “Cajun” battered fries, “Cajun” rice, mashed potatoes and “Cajun” gravy as well as red beans and rice, another Louisiana favorite.

The “Cajun” rice, known as “dirty rice” in the deep South is a blend of meats, shallots and seasonings.  Popeye’s version is among the worse we’ve had, a pitiful pretender that any self-respecting Cajun would toss out.

Popeye’s coleslaw tastes surprisingly like the Colonel’s with a similar surfeit of cloying salad cream.

Our former home state of Mississippi seemingly competed with New Mexico for last place in every ignominious list compiled, but one category in which it leads the nation is in production of pond-raised catfish.  We learned during our eight years in the Deep South what great catfish tastes like and it certainly isn’t what Popeye’s puts on the plate.  The Popeye’s version is desiccated and somewhat flavorless in comparison to what we became accustomed to.

A dessert offering called “Mississippi Mud” might be appropriately named because that’s where it belongs–on the bottom of the murky river for which it is named.  We enjoyed Mississippi Mud throughout the South and will argue that Popeye’s version is a misnomer.

The chicken is the reason most poultry patrons visit Popeye’s and why they return in droves.