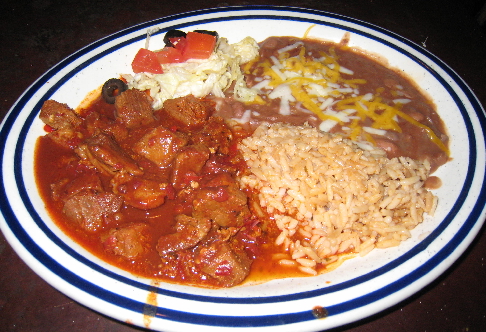 Las Mañanitas, the traditional Mexican birthday song often sung in Catholic churches and birthday parties is one of my very favorite songs of any genre.  It offers the recipient a good-morning wish just as King David himself might have.

During early summer days when Duke City diners feel like serenading their taste buds with New Mexican food, many head to Las Mañanitas just north of Old Town.  There they dine on a brick patio under towering cottonwoods and a canvas of blue provided by New Mexico’s incomparable skies.

The sprawling adobe restaurant is a historic landmark with a colorful history.  Parts of the structure date back more than 300 years.  It has served as a stagecoach stop, saloon and brothel as well as a private residence.  It was once owned by one of the Duke City’s most popular and lively mayors.

Las Mañanitas is said to be haunted with several paranatural occurrences having been documented over the years.  In fact, the Southwest Ghost Hunters Association (SGHA) conducted an investigation of the premises in 2004.  The ghostly apparitions are, fortunately, not malevolent.

The charming edifice includes a myriad of dining rooms, most with doorways befitting much shorter citizenry than my six-foot-one stature.  Uneven brick floors, slanted stuccoed walls of various colors and eclectic Southwestern art work catch your eye at every turn.

Among the eleven rooms are some of the nicest restrooms of any restaurant in Albuquerque with multi-hued Talavera tiles throughout.

The wait staff is very friendly and accommodating which somewhat makes up for the restaurant’s parsimonious policies–such as not offering complementary salsa and chips and charging extra for refills.  Ask for extra lemon slices for your tea and you might be charged for each one (at least that’s been my past experience).

These are the little things that sometimes make the difference between a great dining experience and one you might not want to repeat in the near future.  My most recent visit to Las Mañanitas was with a friend, a Comptroller by profession.  Take a Comptroller to lunch and you’ll likely get a unique cost-analysis of the restaurant’s business model.  Such was my experience.

My friend was pleased that complementary posole was brought to our table, but dismayed at the miniscule portion (about half a cupful) and the absence of pork (one or two pieces per serving) in the dish.  The posole might be good enough to tempt diners into ordering the full-portion bowl, but that’s not a given.  Some diners might be more upset than happy at the smallish portion.

Visit during the noontime hour and you can order from either the breakfast or lunch menus.  The only place in which you will find carne adovada and other typical lunch offerings is in the dinner and breakfast menus.  Dinner offerings are in the range of ten dollars and include beans, rice and a sopaipilla.

The green chile stew, which includes cubed potatoes and beans is quite good.  It is served steaming warm and generates a bit more heat thanks to a nice piquant bite.  Along with the posole (order the bowl), it is one of the restaurant’s best offerings.

In past visits, my observation has been that there are oceans with less salt than some of the entrees at Las Mañanitas and at least with oceans, there’s a desalination process.  That did not seem to be the case at all during my most recent visit in March, 2008.

My Comptroller friend Ruben is in a quest to make the best carne adovada he can.  To that end, he’s been visiting some of the city’s best purveyors of porcine perfection.  Las Mañanitas had been recommended to him.

A dinner platter of blue corn tortilla enchiladas with carne adovada was evenly seasoned, however, detracting from the red chile’s flavor was the fact that the skin from the red chile pods and extraneous seeds weren’t removed (as apparent in the image below).

To be fair, the restaurant’s carne adovada has several redeeming qualities.  For one, the pork is fork tender, moist and delicious.  It is cubed in smaller pieces than at other restaurants, but that really makes it easier to pick up with your fork.

Both the enchiladas and accompanying beans are topped with white and yellow cheeses and served with a garnish of lettuce, tomato and olives.  The beans are very good, a nice complement to the enchiladas while the Spanish rice is fairly typical.

The sopaipillas accompanying the dinner platters are thicker than they are puffy, but they serve as perfect vessels for either honey or the savory component of your meal.

If I was a ghost, I’d probably want to hang around a restaurant for eternity, too, but it wouldn’t be at Las Mañanitas.  Still, there are many things to like about this restaurant and they’re not limited to the homey ambience and cottonwood canopy.

My Comptroller friend may not have been enamored of the portions, extra costs and “dirty” adovada, but I know several people who swear by the food and who don’t mind the extra charges on their bill.